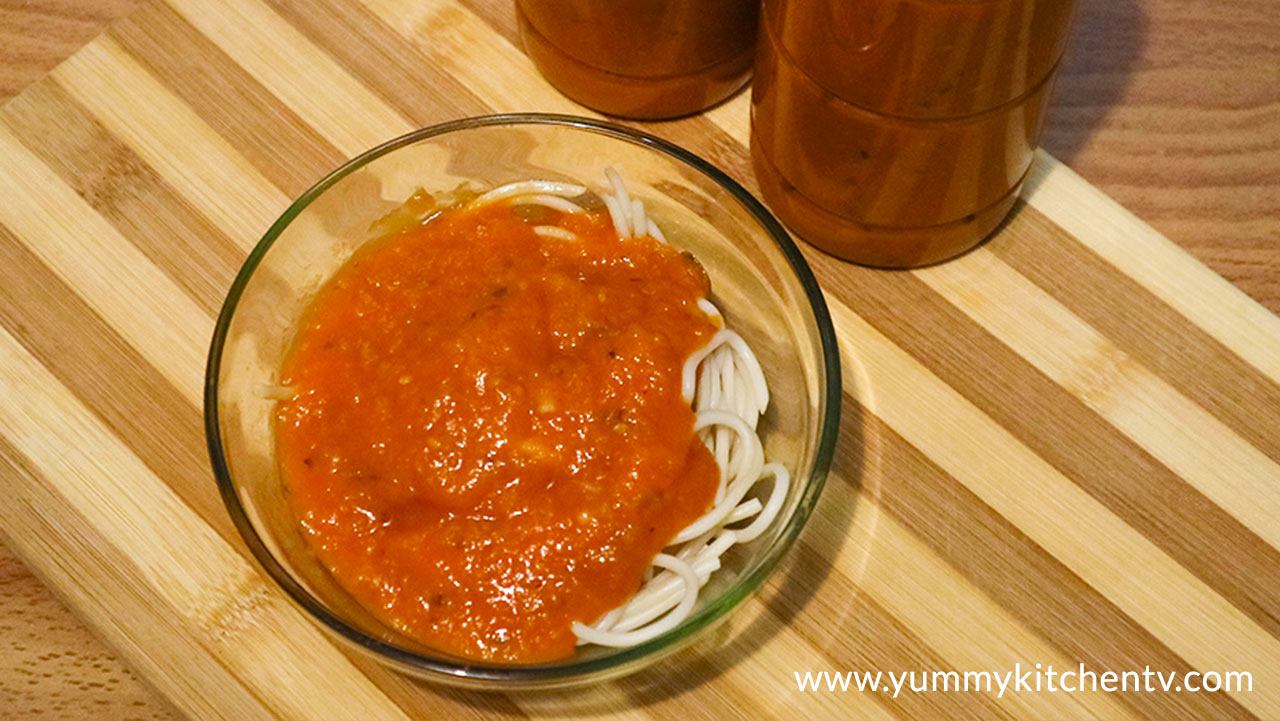 This home made Tomato sauce is really delicious, and is made with tomatoes, white onion, sugar, salt, oregano and basil, and it is a better, healthier and cheaper alternative to ready made tomato sauce buying from supermarket. There are just numerous ways to use this delectable sauce from pasta of any kind, to soups cream or clear, to adding a good amount of sauce into a broth to liven up and enrich the flavors, and even using it as a pizza base. Homemade tomato sauce is a deliciously perfect way to use fresh tomatoes you have in stock at home or you have grown at your summer season.

Brief History on the Tomato Sauce

The “Tomato” was derived from the Aztec term “Xitomatl” and Italian “Pomodoro” colling from the word “Pomo d’oro” wehich meant ‘fruit of gold’. The name tomato came from the word ‘tomate’ from the 1835 French dictionary. It then became widespread and was translated to different languages, one of the many dishes and products made from the tomatoes is the Tomato sauce, also known as the ‘Neopolitan sauce or salsa di pomodoro in Italian, and Salsa roja in Spanish refers to tomato based sauces used as part of the dish or bases like in Mexican salsas, pizza, pasta dishes, bread fillings, and broths. Tomatoes have a natural sweet and sour taste that turns into an enhancer in dishes when added.

The tomato sauce has many uses, and also has many stories from where or when it was created. Some say it was originally used as a love remedy, as the sauce recipe was made in a ‘Summer night’ meaning ‘a night of love’ a young Marquis, d’Avalos was vexed by the constant refusals of a maid and picked some ‘pommes d’amour’ from the garden, crushed them, and mixed them with leftover onions and herbs fried with oil. Served it to the maid and tried to woo her but received a frying pad on this head. the maid rushed back to her room while he tried to rise back to his feet. Feeling desolate, he ate the leftovers and loved it so much he devoured it and ordered the chef to serve him the supposed love potion. Though one of the first to write abou the tomato sauce was a Franciscan friar, Bernardino de Sahagun from the Kingdom of Spain who later on moved to New Spain, mentioned this sauce, which was then offered and sold in Mexico City today. the first to add this recipe in a cookbook was Antonio Latini an Italian chef in his book entitled ‘Lo Scalco alla Moderna’ translated to ‘The Modern Stewart’. This was published in 1692 and 1694 with two volumes, while the first use to incorporate the tomato sauce into pasta appeared in 18790 in the Italian cookbook ‘L’Apicio mdemo’ by Francesco Leonardi a Roman chef.

There are tomato sauce varieties around the world. From the Mexican salsa de tomate rojo o jitomate which is used as a base for marinade and spicy sauces. The Italian variety of the tomato sauce ranges from a simple pasta al pomodoro, arrabbiata and puttanesca sauces, as a stand alone, or paired with clams, pancetta cubes, sausages, vegetables and tuna to create a lively looking pasta dish. In New Zealand, South Africa, and United Kingdom, the term tomato sauce is commonly used to describe a condiment similar to the America ketchup, while pasta sauce or Nepoletana sauce is used to describe tomato sauce. in any which way, the tomato sauce is a beloved flavoring used all over the word and in also any tomato based dish compared to their other counterparts like tomato paste and fresh tomatoes. A nice in between, try out this recipe yourself and enjoy all the ways you can do with this vibrant red sauce.

No one can deny that tomato sauce is the ideal sauce that turns simple dishes into a fanciful looking delicious meal with a hint of red hue.

Just heat up this pasta sauce and slather them in your choice of noodles to enjoy!

Use the tomato sauce by diluting it with water or chicken, beef, or vegetable stock to turn it into a simple but flavorful pasta sauce, or cooking the pasta in tomato sauce and use the pasta’s starch to thicken it by itself, or adding it with some garlic and all purpose cream to get a creamy pasta dinner or a good ratio of milk, all purpose cream or cooking cream to make it into a nice homey tasting tomato soup. You can also thicken the tomato sauce up by itself adding more seasonings if you’d like and use it as a pizza base. This Homemade Tomato sauce perfectly adds that extra savory natural umami goodness to any dish!