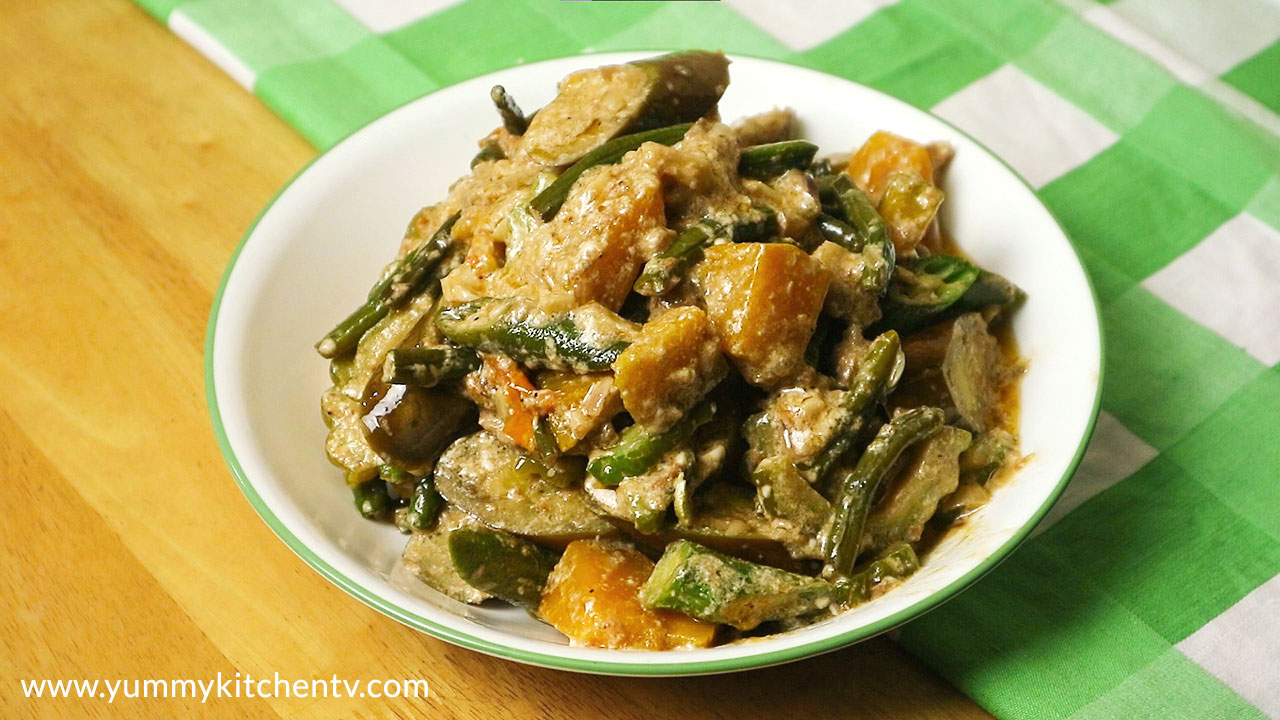 Ginataang Pinakbet is a popular vegetable dish with meat in the Philippines, Originating from the region of Ilocos and this Ginataang Pinakbet is made by using pork belly, garlic, onion, tomato, shrimp paste, squash, beans, eggplant, bitter gourd, okra coconut milk sugar and salt. The word ‘pinakbbet’ means ‘shriveled’ or ‘shrunk’. The original Ilocano pinakbet used bagoong or fermented monamon or fermented anchovies, and doen south most use fermented shrimp paste in their pinakbet recipe.

Gata in English is coconut milk. Coconut milk is described as an opaque, milky liquid in color, it’s a fruit that’s has been extracted from matured brown coconuts. The rich taste and opacity of the coconut milk are from the high oil content otherwise known as saturated fat. This good fat is good for your metabolism, for reducing weight, and for the body composition. It’s a heart healthy choice that benefits people with high cholesterols, reduce inflammation, fights bacteria and viruses which also includes the ones found in the mouth, decrease stomach ulcer size, and is comparable to an effect to an anti-ulcer drug. Coconut allergies are rare, with so much benefits and almost no negatives surrounding this, who wouldn’t want to try and incorporate it into their meals and dishes?

Coconut milk is used in many traditional Asian dishes from Southeast Asia, South Asia, East Africa, and Oceana. You can also find this ingredient used in Tropical Latin America, the Caribbean, and West Africa, which were introduced through trade in the colonial era. The Coconut milk isn’t only added in savory dishes, its been used to create desserts as well as be used as a milk alternative. Coconut milk is created by grating the remaining coconut in a cheesecloth squeezed and is simmered with or depending on the process with or without water, strained and repeated to produce a thin milk. An example of using coconut milk as a drink, is the processed then sweetened coconut milk beverages from Puerto Rico, also known as ‘cream of coconut’, its also used in alcoholic beverages like piña colada and should not be confused with it’s thicker creamier counterpart, the coconut cream as it has a high fat consistency and cannot be used as a drink. Many coconut products have been ‘restyled’ and ‘reintroduced’ as much more diets and health needs are being introduced, the coconut milk and cream have now made its way to create alternatives for evaporated milk, condensed milk, and even whipped cream.

What is a Ginataang Pinakbet?

This Ginataang Pinakbet is a traditional Filipino dish, this mix of various vegetables like squash, eggplant, okra and many more can be adjusted to personal preferences and depending on the season’s availability. It’s a nice healthy forgiving dish that not just creates a flavorfully great taste combining the selected vegetable and coconut milk mix; it’s a hearty dish that can be enjoyed together with any Filipino dish you might be planning.. The Pinakbet recipe commonly consists of only vegetables like squash, bitter melon, sweet potatoes, okra, tomatoes, chili peppers, patani, kadios, green beans, and eggplants, some use a small pod of marunggay or horseradish, made aromatic with ginger, garlic, and onions, with the addition of sliced pork or pork chunks to add some meat and make it into a complete meal with a side of warm rice. A nutritious meal in itself the pinakbet also has versions where chicharon or pork cracklings are added, and some cases chunks of lechon are mixed in to give it a métier feel.

A delicious medley of colorful vegetables slathered with a sweet creamy but still savory coconut milk sauce that just warms you up from the inside and out. Try out this Ginataang Pinakbet yourself!

Add this recipe in your monthly or even weekly rotation of meals to give you that booth of energy only vegetables can supply. This dish will even make meat lovers slowly incorporate them in their diet. This savory sweet creamy meal is just that ideal balance that this dish provides. Try it out yourself and treat your body with something nourishing and healthy that will keep your body active and provide enough energy to keep up with your hectic lifestyle.