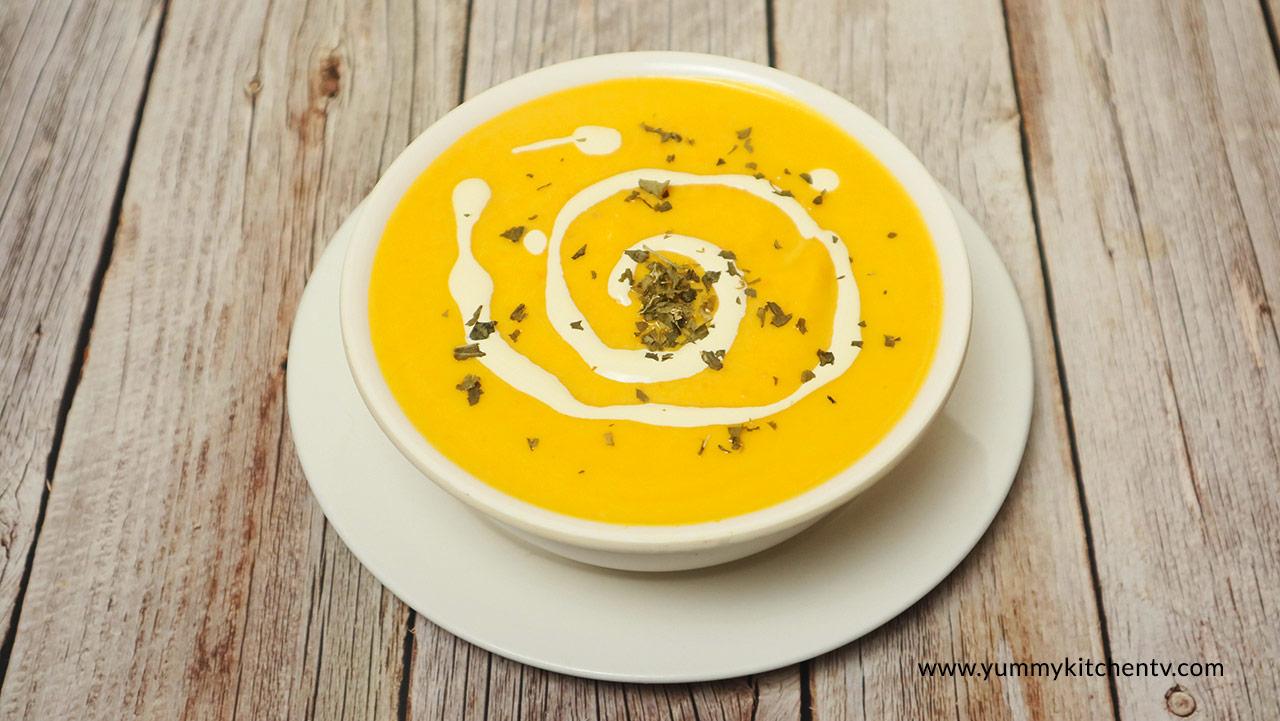 Creamy Kalabasa Soup or Squash soup, is a creamy soup made of stewing squash, carrot, onion in soup made with butter, all purpose cream, parsley, salt and chicken broth. This cozy homey Kalabasa Soup is the perfect rainy day partner that warms you up inside and keeps you toasty and relaxed. Get snug and comfortable with this easy to do thick soup that’ fill you up and mellows your nerves perfect to de stress or for moody weather.

A brief introduction on the Creamy Kalabasa Soup

The Squash or Pumpkin soup is a thick soup served hot or cold, commonly eaten at Thanksgiving in the United States. A dish eaten in many European counties, Asia and Australia with various versions to suit each country’s local ingredients and taste. This was even a staple during the Vietnam War where it was given to prisoners of war in the North Vietnamese prison camp. Some squash soups have the squash roasted before preparation to concentrate on its flavor as well as give it a roasted really intense taste. While many can find squashes or pumpkins readily available in their local wet market, groceries, or street vendors, many do also use frozen chopped squash as this can last longer and just needs to be thawed, some also come pre-cooked, pureed and frozen. Butternut squash has a natural sweet flavor, which makes them a great healthy soup that even kids would love.

The Butternut squash has been grown as far back as Ancient Egypt. Where colonists who landed in North America, where Native Americans introduced the colonists to the vegetable. Traded throughout the world which is why we have them available and have different shapes and sizes because of the soil of where it’s grown. The creation of the pumpkin soup came during 1804, with the celebration of the Haitian Independence. In January 1, 1804, Haitians came together and created this unique soup to celebrate from their independence from French Colonists. It was under the French ruling that Haitians were only limited to eat bland bred soup soup, unable and unpermitted to eat anything extravagant such as pumpkin, other vegetable or beef stock. This soup also called ‘soup joumou’ is served to family and friends in Haiti in the remembrance of their fight for freedom. The soup created as a symbol of unity to face adversity is still traditionally eaten at their independence celebrations. The soup made features sour oranges and limes rubbed on the beef before cooking to give the soup a slight tang, this also doubles as a metaphor to the bittersweet legacy Haitians faced to find their independence, the authentic version also uses a spicy pickling vinegar or “picklese” which also originates from Haiti.

Today the pumpkin soup is found all over the world, while it was predominately made in Haiti during their independence celebrations. Haitians who immigrated to the united States brought with them the pumpkin soup which was then modified with the years and changed to use local ingredients and was and still now prepared and served in the United States for their thanksgiving holidays. The Pumpkin soup wasn’t mentioned in books till the mid 1800s in America

Create this wonderfully rich and creamy steaming bowl of soup that not only keeps you warm but the vibrant tint of orange-yellow appealingly boosts your mood.

A creamy bright yellow soup that warms you up

This classic soup is creamy, thick, and pact full of flavor. Side it with freshly toasted bread or hot buttered buns to help scoop up any leftover soup at the end. Squash soup is just a versatile and easy dish to create, its naturally sweet, easily combined with your choice of spices, can be dolled up or made simple and it would taste just as good. This simple, quick, usually autumnal soup is just a warm hug especially on sick days.