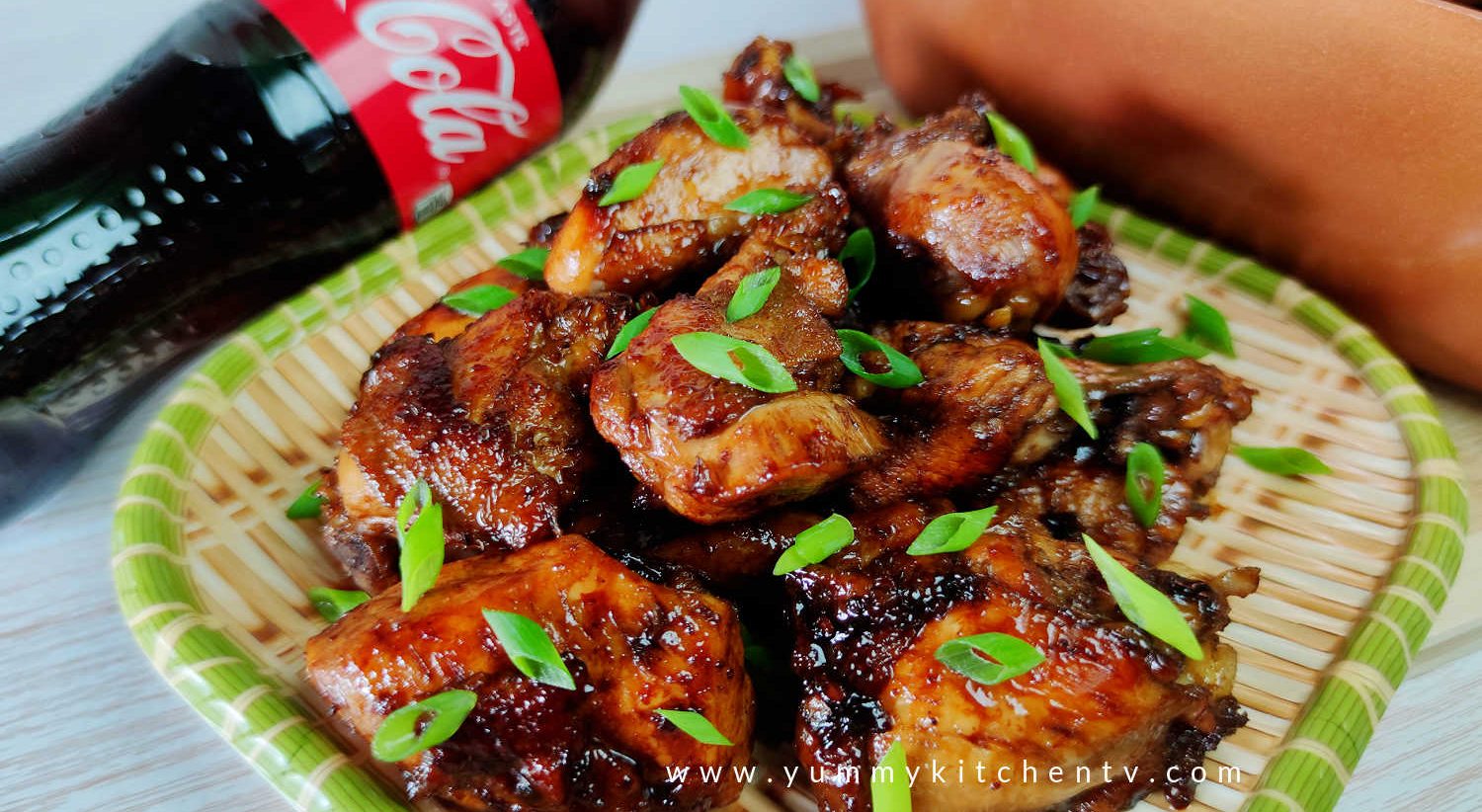 By YummiesPosted on August 1, 2021September 3, 2022
Jump to RecipePrint Recipe

This Coca Cola Chicken recipe is easy to make and it’s so delicious and is made with sauteeing chicken pieces in oil with coca-cola, soy sauce, garlic, ginger, pepper and salt. It has been garnished with spring onion. The exceptional sweetness of this cola dish is a new way to sweeten your favorite Chicken.

Did you know that how Coca Cola was made is very controversial? The name “Coca Cola” was actually based on cocaine from the coca leaf. Yep, that’s the stimulant-drug cocaine you know. As you know, cocaine was legal before and were used in medical purposes. Coca Cola was originally used as a drink for the most common ailments back then—conditions which are mostly treated using cocaine. It was then developed into a soda drink in 1903 which anyone could enjoy. This cola was modified further and the cocaine and the kola nut was removed from its list of ingredients.

The Coca Cola has evolved through time until the coke we enjoyed now. The sweet and caramelly soda drink is best partnered with almost any food whether with rice, noodles or bread. Aside from being one of the top beverages consumed in the world, Coca Cola drink has now also been incorporated in different dishes just like the one in this blog today.

Coca Cola-based dishes is what I do when we have an abundant supply of coke in our pantry. This happens every December when a lot of my relatives came over to visit. Aside from wine, Coke and Sprite are their usual gift to me as they know I really like to incorporate them in my recipes here at Yummy Kitchen.

The main contribution of Coca Cola in dishes is primarily its sweetness. It has this distinct sweetness profile which table sugar, milk, and other sweeteners can provide. Not only it provides sweetness, but the cola as a soda can help in tenderizing your meat, especially when you’re dealing with pork or beef. If you will be using it as a sauce, just like in this recipe, the cola will turn give your dish a sweet and savoury glaze. And if you haven’t used Coca Cola in any of your dishes, you’re totally missing out a lot! If this blog made you curious about using Coke as an ingredient, this dish below is a quick and simple starter. Give this a try today!

HOW TO MAKE COCA COLA CHICKEN

Preparing this chicken dish is very simple. Start by marinating your chicken chunks with salt and pepper. Sear them up until brown crusts form. If you have a large batch of meat, sear the chicken by batches and just put them back in the pan when all are done. Add the rest of the ingredients. Do not remove the chicken-infused oil as it would enhance the chicken flavor. Allow the dish to cook until the sauce is reduced.

You can already turn the heat off and serve it as this point. But I really like this dish “iga” or almost dried so I cooked them up much longer that the remaining Coca Cola sauce already sticks and coats the chicken pieces. The evaporated cola has now turned into a thick and luscious glaze. And voila! Your Coca Cola chicken is done.

P.S. You can try a spicy version of this too! Serve it with a big bowl of hot steaming rice and some cucumber slices on the side!