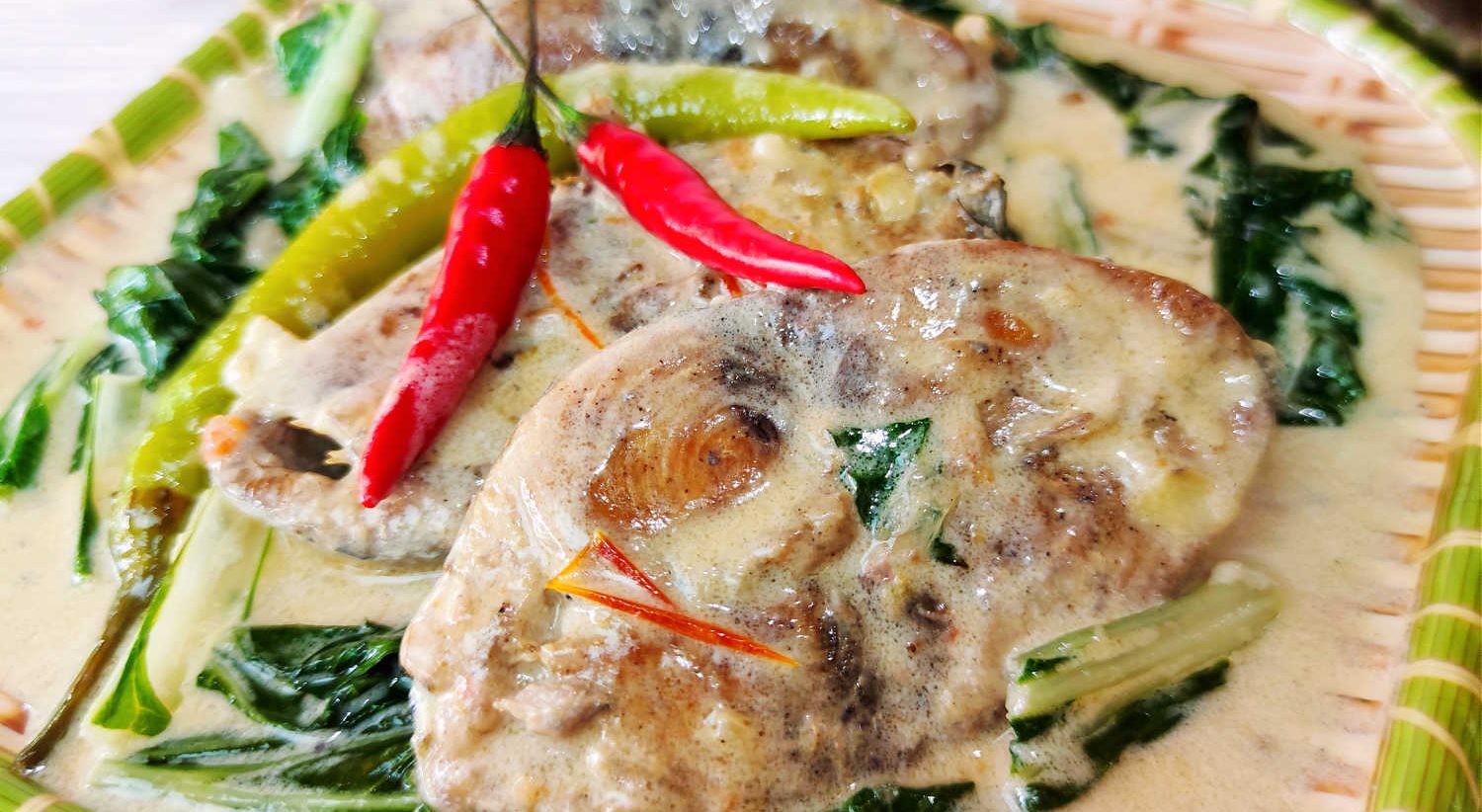 Ginataang tambakol is a creamy fish stew made by cooking tuna in a creamy sauce made with cocnut milk, pechay, onion, garlic, ginger, tomatoes, chilies, pepper, fish sauce and oil. This no-fail ginataan dish is one of the most common coconut-based dishes in the Philippines. Have a taste of one of Bicol’s finest dishes. This Ginataang tambakol recipe will show you how to make Ginataang tambakol in your home. Try the ginataang tambakol today and partner it with a lot of rice. Best served during lunchtime.

Tambakol is a saltwater fish with famous for its stripes on its back and its deeply forked tail. It also goes by the names yellowfin tuna, mackerel tuna, skipjack tuna. It is sold in the market using these common local names: tulingan, barilis and talingay.

Tambakol has a soft flesh with fresh ocean taste. Like other big fishes, tambakol can be prepared in a lot of ways. Some of the most common are paksiw, sinaing, tuna steak, and of course, the ginataan.

If you want to learn how to prepare ginataang tambakol or tuna in coconut milk, continue reading the recipe below.

Ginataan is a cooking process which involves the use of coconut milk or “gata” in Tagalog, hence, “ginataan”. Gata is super handy as it can be used in meaty ginataan dishes, veggie ginataan and desserts like ginataang bilo-bilo. But when it comes to savoury dishes, Bicol is the most famous region known to be making the best ginataan recipes.

Gata is one of the mostly used ingredient in the Philippine cuisine. We are lucky that our country is abundant with coconut trees. Ginataang tambakol is known to originate from the Bicol region. Coconut milk and chilies? Definitely Bicolano! There are two ways on how to prepare ginataang tambakol. The first one is boiling the fish and then adding the coconut cream in the broth. The second one is frying the fish first and then making it absorb a creamy broth later. The second way is what I usually do so that the fish will not break apart while cooking.

Preparing ginataang tambakol is super easy and simple. So I ask my Bicolana friend about the secret of making the best version. One does not need to be a chef or super skilful in the kitchen. She told me that the most important factor in any ginataan dish is the freshness of the coconut cream. I know it is more convenient to use ginataan powdered mixes nowadays but I highly suggest to buy freshly pressed coconut cream from the market. Much better if you can squeeze them at home!

HOW TO MAKE GINATAANG TAMBAKOL

Before you start, make sure to clean the tambakol well. You can ask the fish vendor to remove the guts for you. If not, the gills and the tummy of the fish must be removed and cleaned thoroughly. For this dish, it is better to pre-cut the fish into serving slices.

Massaging the tambakol with salt and pepper is the basic step in any fried fish. This step adds flavor and also helps in removing liquid from the fish, preventing too much oil splattering during frying. Fry the tambakol slices enough to be half-cooked. It will further cook later using the creamy broth. Start the broth by sautéing your aromatics and then adding the coco cream and chilies. Add the fried fish to the pan and let it absorb the broth. Lastly, add your pechay leaves. You can use any veggie leaves if you prefer. When I am in the mood for something super spicy, I add some chopped red chilies too! Swear, you will be drooling a lot as you cook!

When everything is set, your ginataang tambakol is done. Super easy, right? Enjoy this dish with a lot of hot steaming rice!