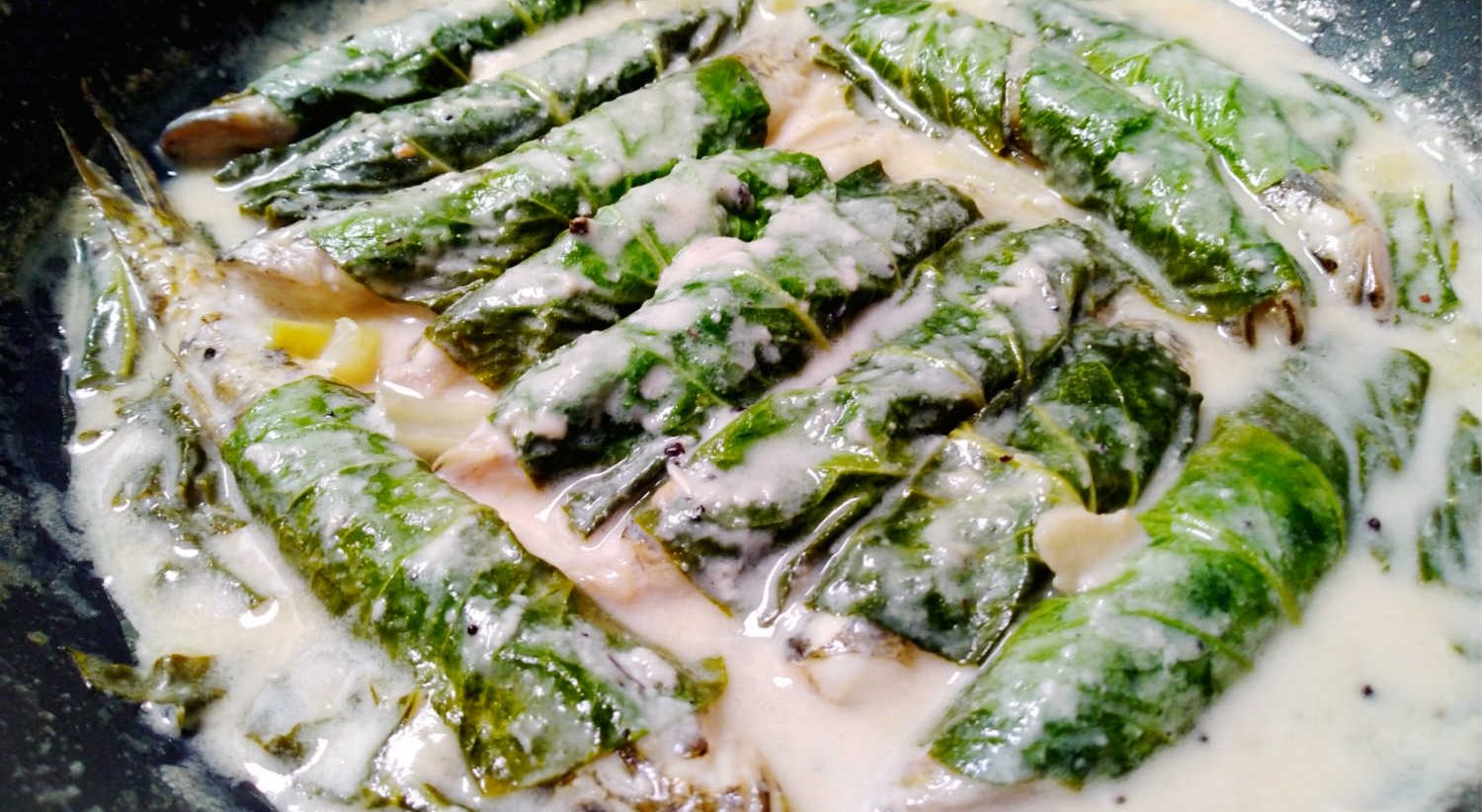 Enjoy a dose of ocean goodness and fresh earthy flavor with this ginataang biya recipe! The ginataang biya is a creamy fish stew where your favorite Tank goby fish is wrapped in pechay leaves and braised in a creamy aromatic coconut sauce. Best eaten with a bowl of hot steaming rice!

If you’re watching discovery channel, you’ll probably know what a goby fish is. Tank goby, or more commonly known as biya, is a type of fresh water fish which is a not so common fish in the market. This is what makes this fish special and something to look forward to. You can find most of the biya in fishing farms which specifically grows them. There had been past issues on the safety of its consumption and it is required to clean the biya thoroughly before using in a dish.

With the abundance of coconut farms in the Philippines, ginataan is one of the savoury dishes very popular among the Filipino cuisine. The word ginataan came from the root word “gata” which is the Tagalog term for coconut milk. Ginataan is a way of cooking method which uses gata or coconut milk to make it creamy and delicious. A lot of fish has been a a great star ingredient for ginataan dishes. These dishes are usually cooked with the vegetables of your choice which commonly includes eggplant, string beans and leafy greens.

It is always a celebration whenever my nieces and nephews come to visit us. These are the type of moments where I put out any special ingredient I have in my pantry to make an awesome dish for my special ones. My nephew specifically is a fan of pechay. I decided to make them some ginataang biya wrapped in pechay leaves. My nieces and nephews were amazed seeing the wrapped fish in coconut sauce. They told me that this is the first time their ginataang isda was served that way.

To have a more fun and unique way of making ginataang biya, try this wrapping in leaf technique. You can also use this recipe as a guide if you want to adopt this method for other ginataang fish.

HOW TO MAKE GINATAANG BIYA

Preparing ginataang biya is as easy as you can imagine. It is a one-pan dish that wont cost you even a single sweat. Basically what you needed to do is to arrange everything in the pan before you turn on the fire. Make sure to prepare all ingredients before starting.

Almost all Asian dishes start with a good amount of aromatics. Aside from the common aromatics which include onions, garlic and tomatoes, some chopped ginger will be useful in getting rid of the fishy taste or the “lansa” of our biya. Chop your aromatics and arrange them in a pan.

There are different ways of cooking ginataan dishes especially when it includes vegetables in it. More commonly, the vegetables are chopped and cooked together with the main dish. I will share a new hack on making your ginataan dish more presentable and appetizing. Instead of just throwing all the ingredients in the pan, get your pechay leaves and wrap it around the biya. Arrange the wrapped biya above the aromatics so that the complex flavors will seep in the biya as it cooks. Add the rest of the ingredients for a hassle-free cooking.

The last thing to do is to add the coconut milk when the sauce boils. Remember not to cover the pan to prevent the coconut milk from curdling. The ginataang biya I made was for my nieces and nephews so I chose not to add some chilies. But if you’re a fan of spicy dishes, a spicy ginataan sounds good too! When the fish and pechay are cooked, continue cooking depending on how saucy you like your dish to be. Make sure to prepare a lot of rice for your kids will surely love this! Yum!