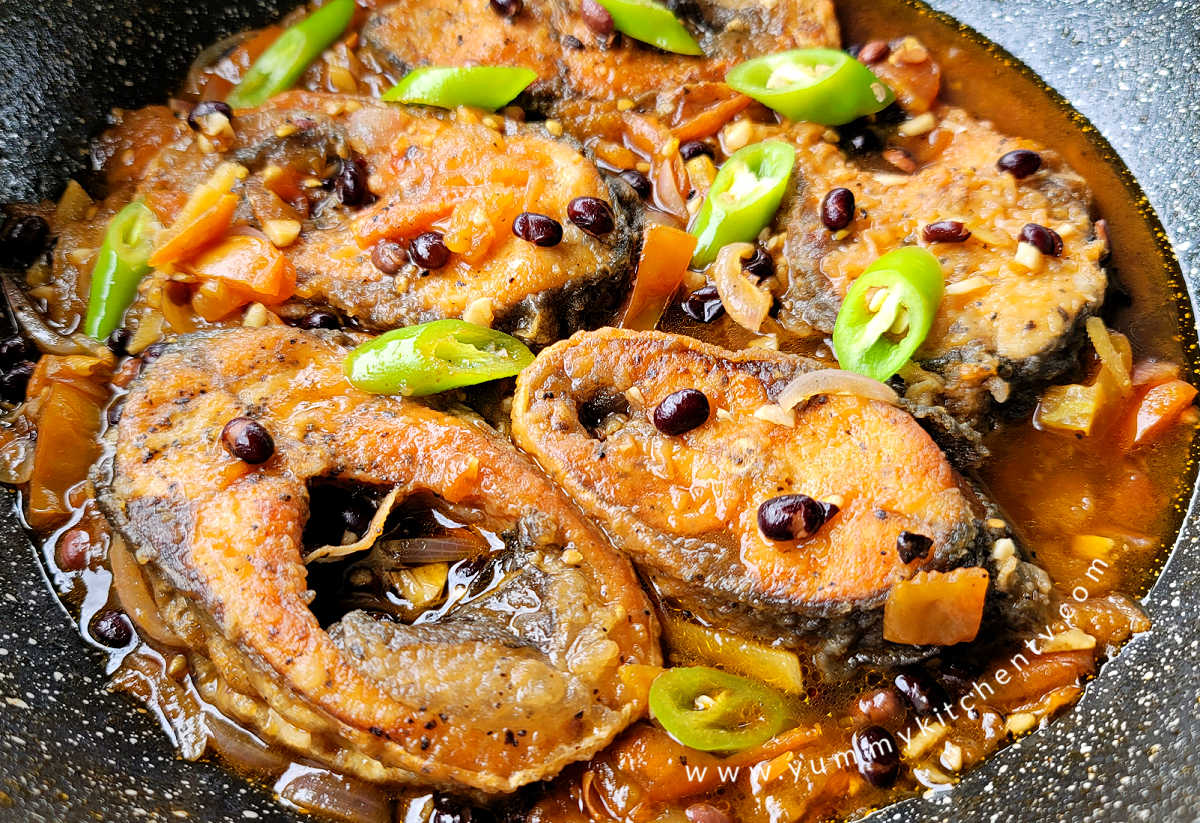 By YummiesPosted on December 5, 2021November 21, 2022
Jump to RecipePrint Recipe

Bangus sa tausi is a Filipino fish stew made by simmering milk fish and black beans in a sauce made with tomatoes, garlic, onion, soy sauce, sugar, all purpose flour and oil. Bangus sa tausi (milkfish in salted black beans) is great for hydrating your boring lunch and making it extra fun to eat. Taste the savoury flavor of the tausi beans and make bangus with tausi today. Yum!

WHAT IS A TAUSI?

Tausi is a common ingredient in Asian cuisines, especially in the Chinese recipes. Tausi, or salted black beans in english, are actually soybeans which are fermented in salt and then processed. Unlike your regulay soy beans, these beans have an extremely powerful umami ang salty flavor which best compliments steamed dishes.

As simple as it looks like, the tausi sauce is a favorite sauce used in a variety of meat sources like pork, chicken, fish and even meat substitutes like tofu. Aside from this, tausi is used as an umami enhancer to savoury dishes like humba and paksiw and steamed dishes like pork spare ribs.

Pork tausi or spareribs in tausi might be the most common dishes you have tasted using this special ingredient. In this recipe, I will share how I make my bangus in tausi.

Tausi sauce is made by simply extracting the umami flavor of the tausi beans and combine it with the earthly and savoury flavors from the basic aromatics used in cooking. It is best combined with simple dishes like the fried ones to simply enhance the dish and give it a little hydration.

Whenever I cook fried bangus for lunch, I make sure I have some tausi sauce prepared on the side. We know how hot the weather is during lunch time so it’s really best to prepare some saucy dishes. They can eat the fried bangus with any dipping sauce they like or have it with my savoury tausi sauce. Pouring tausi sauce over my bowl of newly steamed rice will surely make it flavorful on its own. Eat the bangus with it and your lunch will be much happier!

HOW TO COOK BANGUS WITH TAUSI

Making this dish is super easy and wont cost too much of your time. In this recipe, we are going to prepare the bangus and the sauce flavored with tausi black beans.

Preparing the bangus is pretty simple. It is just like frying your regular bangus. But first, are you one of those who are traumatized in frying because of the oil splashing causing mini burns in your skin? If yes, I have a simple hack for you!

Dredge the fish or meat in flour before putting them in the oil. The flour will serve as a coating and will cook first before the fish. This will also give the fish a brown crust and will seal yummy juices inside.

After you fry your bangus, let’s go and make the tausi sauce.

To start, simply saute the rest of the ingredients until they turn into an aromatic blend. Add the salted black beans (tausi) and saute them as well.

I eased up with the salt or soy sauce since the tausi is already salty. Pour some water to help extract the flavors from the black beans. Have a bite of your tausi beans when cooking to see if they are soft enough. You might also want to mash the tausi a bit while cooking to fully unleash its flavors.

Cook the sauce a bit more until it becomes thicker. That’s when you add the fried bangus from earlier. Baste the bangus with the sauce to absorb all the flavors.

And it’s done! Your bangus with tausi is ready to serve. Make sure to prepare a lot of hot steaming rice beforehand. Yum!