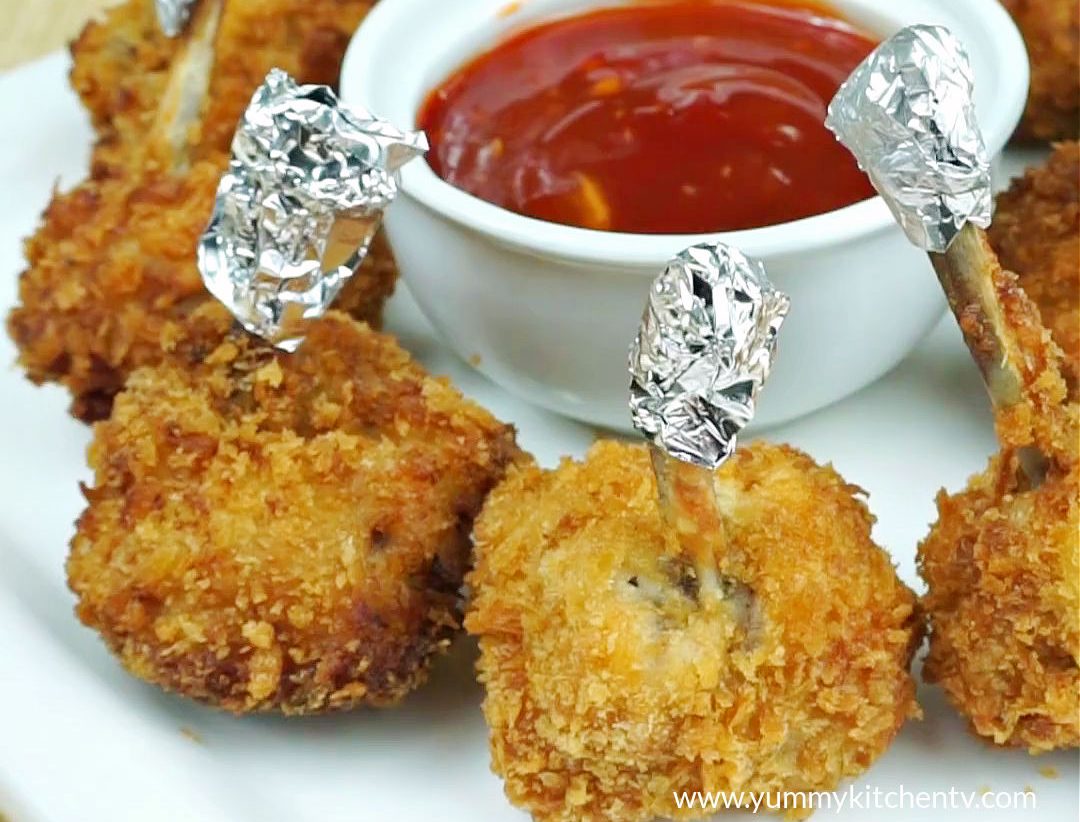 Chicken Lollipop is made with chicken wings, all purpose flour, eggs, garlic powder, white pepper and bread crumbs. The chicken lollipop is a crispy and crunchy chicken with its bone acting like a lollipop handle, making it the easiest way to eat your favourite fried chicken! Dip it with some gravy and ketchup and your kids will surely love it! Munch the crunch! If you’re missing the chicken lollipop craze in the past, it is now time to make some on your own.

Chicken lollipop was a nationwide craze in 2010. There are a lot of restaurants which offered chicken lollipop and one of the first I tasted was from Red Ribbon. Before I saw the commercials, I actually thought that chicken lollipop is a sweet chicken, as sweet as a lollipop. My aunty ask the whole family to come and try it. As a child in this era, I was expecting a sweet chicken but was amazed on what was served at our table. My first words were “the chicken has a handle that’s why it’s called a chicken lollipop!”. My light bulb moment a bit late but at least I had an actual experience of the famous chicken lollipop.

Chicken lollipop is a dish adapted from the Indo-Chinese cuisine. Many do not know this but chicken lollipops are made from chicken wings! The chicken meat are pushed on one side of the bone to imitate that lollipop look. The authentic chicken lollipop are usually served with Szechuan sauce but here in our country, gravy or ketchup pairs it well.

What I like the most about these chicken is the ease of handling. Like a lollipop, the bone acts as the handle, making it easier to eat. The crispy chicken is also found on just one side bone and you can easily munch the whole thing if you like.

Chicken lollipop slowly fade out from restaurant menus with the birth of more and more new dishes. This is why it became nostalgic when I prepared some chicken lollipop for my nieces and nephews who never heard of it.  If you’re like me who misses chicken lollipops or want to introduce them to your chikitings, here’s a quick recipe guide to help you make your homemade chicken lollipops.

HOW TO MAKE CHICKEN LOLLIPOP

Chicken lollipop is prepared just like your favorite fried chicken wings but with a few extra steps. It will take you a few minutes to prepare the chicken wings but the steps after that would be quick and easy.

The best wings to choose are the big ones. These will give you big chicken lollipops. Prepare your wings by cutting it into three parts using the joints. The parts you will use are the meaty ones—the drumette and the wingette. The drumette has only one bone so simply push the meat on one side of the bone and kind of shape it like a circle. The wingette has 2 bones. Remove the smaller bone and do the same steps you did on the drumette.

Now that your chicken wings are prepared, the next steps would just involve dredging them in different coatings to make them crispy and frying them until you have crunchy and golden brown chicken lollipops. You can eat this as a snack or serve it with hot steaming rice. Make sure to serve them with your favorite dipping sauce! Enjoy!