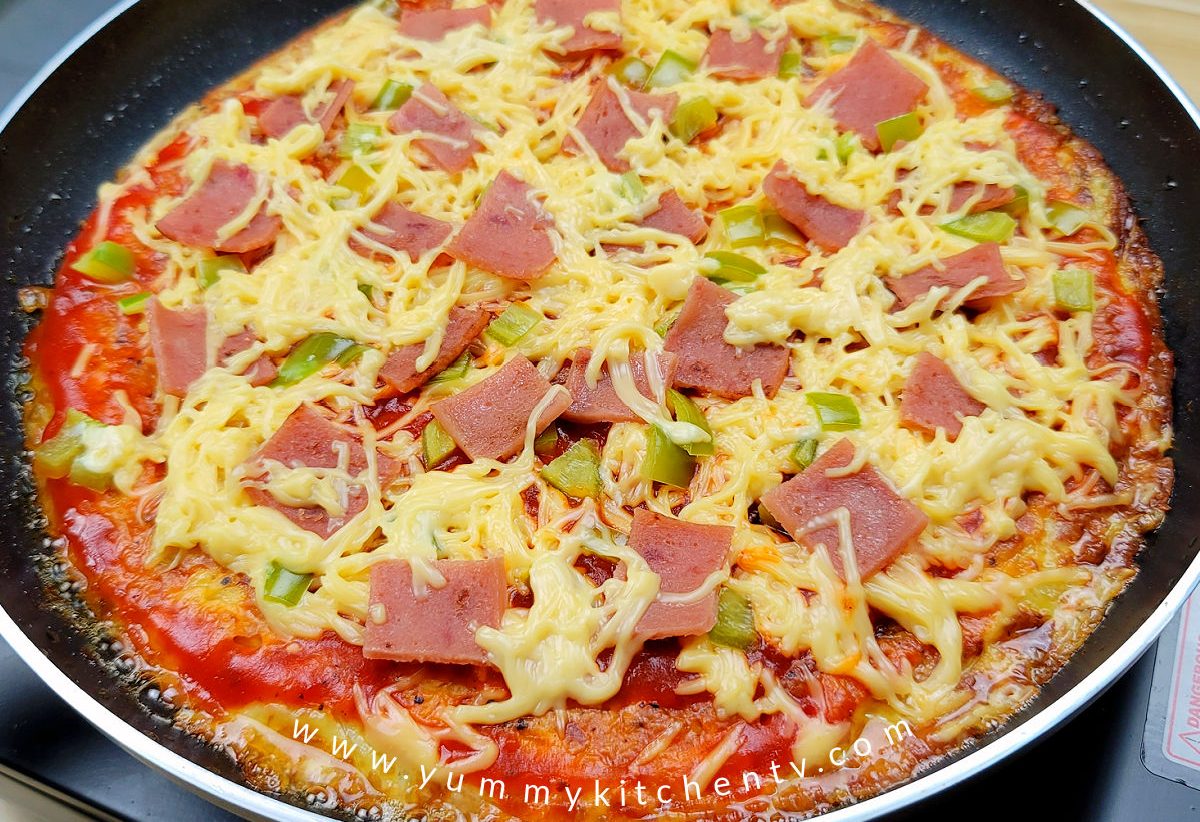 This cabbage pizza is made by frying a pizza batter made with cabbage, ham, eggs, white onion, grated cheese, bell pepper, pizza sauce and seasoning materials. This Cabbage pizza is healthy and tasty and is very easy to make with your leftover cabbage and ham. So do not throw your leftover cabbage and let’s make it into a nice and healthy pizza! Cabbage and ham strips were transformed into a pizza based and were topped with your favourite pizza toppings such as ham, cheese and bell peppers. Decorate your own pizza with the cabbage pizza. Yum!

I was doing my weekly youtube binge watching when I saw this youtuber create a giant takoyaki-like pancake. It was made mostly with cabbage and then used eggs as a binder. After that, she topped it with bonito flakes and mayonnaise and the sweet black sauce. Actually it simply looks like a giant takoyaki which is flat instead of a ball.

As a fan of takoyaki, I really wanted to try that recipe. When I had some extra cabbage from the pancit guisado I made, I immediately chop the remaining cabbage and do the same steps as the youtuber. So like that, I also added the sweet black sauce, and my mayyonnaise. Before I added my bonito flakes, my niece stopped me and asked for a slice of it before I add the bonito flakes (she doesnt like bonito flakes). I continued decorating my giant takoyaki pancake and enjoyed it just the way I want it.

I saw my niece customizing her slice like it was a pizza. She put some grated cheese in it and add some pineapple tidbits we left at home. That was actually a very good idea!! The next time I had excess cabbage, I tried making another giant takoyaki pancake without the mayo and sweet black sauce. With the help of my niece, we both decorated our very own first cabbage pizza!

While using loaf bread as a pizza crust is much easier, making some cabbage pizza especially if you have excess cabbage is much more economical than throwing them out or letting them wilt badly in the fridge.

While the cabbage pizza is healthier, it is also yummier! If you wanna know how to make a cabbage pizza, read and follow the recipes below! Happy cooking!

HOW TO COOK CABBAGE PIZZA

The steps in making this cabbage pizza will truly shock and amaze you at the same time. Let’s start!!

For this recipe, the cabbage will be used as the pizza base. But how could we actually do it? Before anything else, lets chop the ham and the cabbage and all other ingredients which needs to be prepared.

Once ready, we are going to make the pizza base by kind of making a dough but is mostly made with cabbage. Start with the wet ingredients (eggs, dissolved broth cube) and then combine it with the dry ingredients (cabbage, ham, onions, flour). The flour is only optional and should only be used if the the mixture suddenly got too wet. Be careful of adding flour since it the pizza base would taste like raw flour if you added too much.

Once the mixture is combined well, it will be cooked similar to an omelette. Simply pour them on an oiled heated pan and let it cook on its own (do not stir or move it) until the bottom part is brown and already releases itself from the pan. The next thing you need to do is to cook the other side. An easier way to do this is to use a plate as the cover of the pan and then flip. This way, there would be a little chance that the pizza crust would torn or jump out of the pan.

While the other side of the pizza base is cooking, lets start topping the pizza with our toppings. In this recipe, I sticked with the usual ham and cheese pizza by adding a lot of cheese and the sliced ham. You have the freedom to decorate the pizza with any topping you like.

Once the cheese melts, it is also most likely that the other side of the pizza base is already browned. Transfer the cabbage pizza to a serving plate and slice them into 8 (or eat all for yourself!)  Best drizzled with some mayo and hot sauce. Yum!