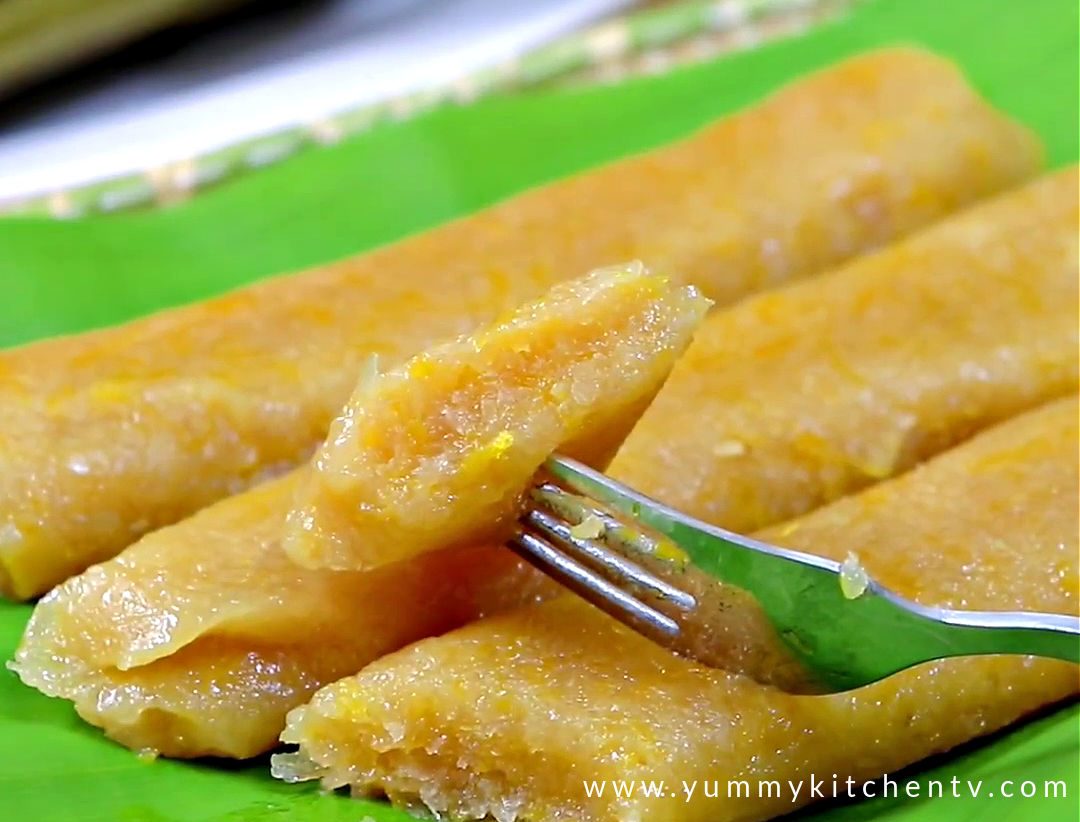 Suman balinghoy with kalabasa is an enriched version of our classic suman balinghoy. This native Filipino delicacy uses squash for texture and added vitamins and minerals. Enjoy your favorite suman in a healthier way!

Suman is one of the Filipino native delicacies. It is always present during different festivals and special occasions. When one delivers you a box of suman, you are more likely invited to one’s wedding.

There are different types of suman like black rice suman, tupig, suman pinipig, suman sa lihiya, suman moron and many more. Each of them has their own unique features but one common thing which makes them suman is being wrapped in banana leaves.

Suman balinghoy is one of the first suman recipes I’ve learned ever since I was a child. I like how to suman balinghoy is already sweet unlike the others which needs toppings like latik or sugar. With the suman wrapped in banana leaves, it is very convenient to eat even when I’m on the road.

With my journey on trying to make classic dishes healthier, the suman balinghoy with kalabasa was born. I had an excess supply of kalabasa during that time and decided to add it in my suman balinghoy. Aside from fortifying my suman with a lot of nutrients like vitamin A, iron and B-complex, the kalabasa also gave the suman a nice texture. I consider this a certified healthier and tastier version of the classic suman balinghoy. If you want to try this recipe, continue reading the instructions below.

HOW TO COOK SUMAN BALINGHOY WITH KALABASA

If you have tried making the classic suman balinghoy before, the steps will be almost similar except for a few twist. Prepare the cassava and squash by grating them in two separate bowls. The next step would be combining all the ingredients together. Make sure to squeeze the liquid out of the grated cassava for your suman not to be too runny.

It’s wrapping time! Before you start to form the suman, prepare your banana leaves by passing them quickly over the flame to become pliable. Scoop some suman mixture and arrange them into a log. Roll the suman and secure the content by folding the sides inward. Most sumans are sold in pairs, hence they are called “kambal na suman”. You can opt to just let your suman cook individually. If you are planning to sell them, it is recommended to tie two sumans together with the folded sides inside. Tie the sumans using banana leaf strips and then let them steam until done.

You can eat the suman straight out of the steamer or let it cool a bit before consuming. The suman is sweet enough and doesn’t need toppings like latik. Enjoy your suman balinghoy with kalabasa with a cup of hot tea or coffee.