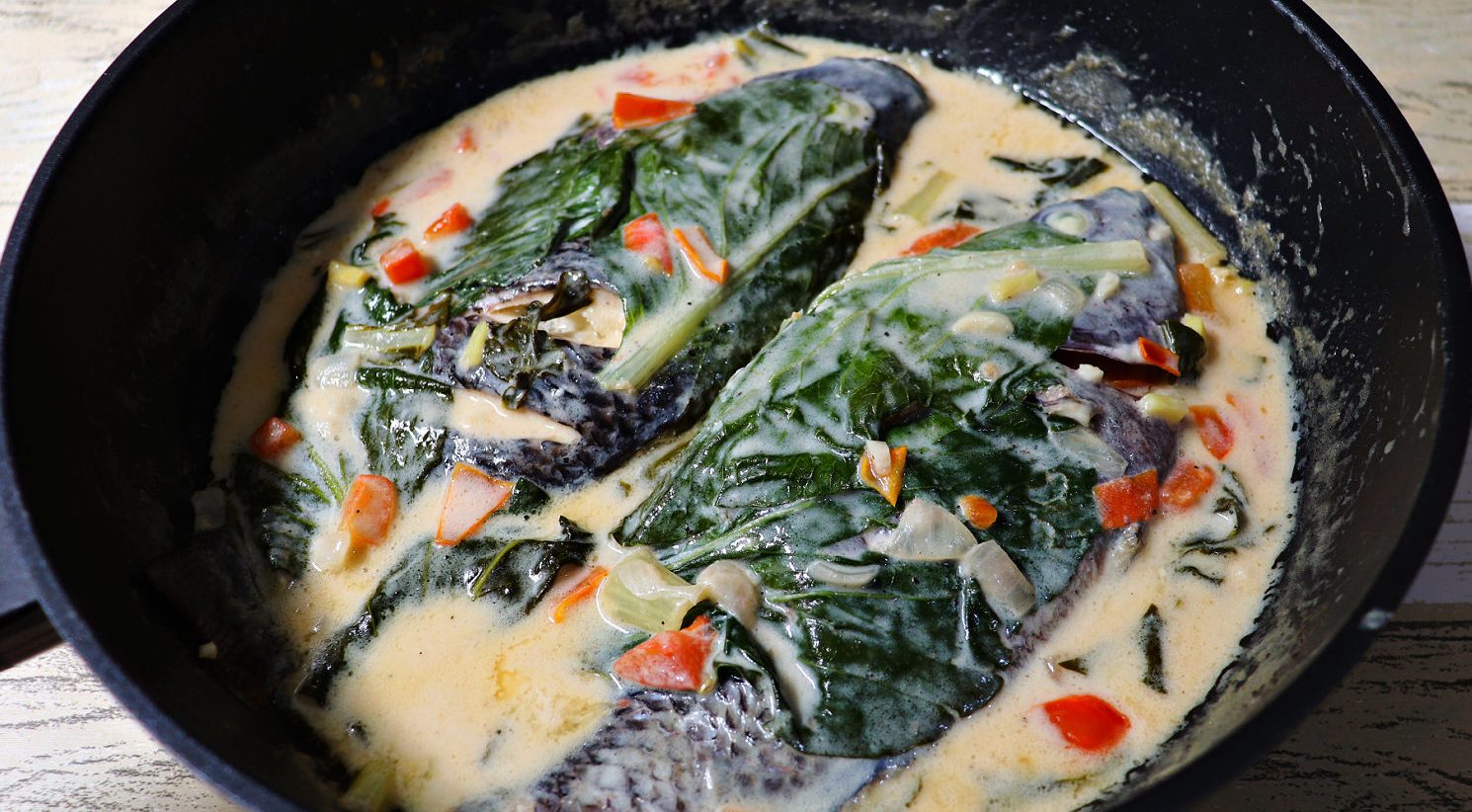 By YUMMYKITCHENPosted on January 4, 2021October 7, 2022
Jump to RecipePrint Recipe

Ginataang tilapia is a Filipino dish and this Ginataang tilapia with pechay is made by cooking tilapia and pechay in a gravy of coconut milk, tomato, vinegar, onion, garlic, ginger, fish sauce, salt and pepper. This yummy kitchen Ginataang Tilapia recipe is with pechay is very tasty and scrumptious due to flavour of pechay. With this recipe, I’m going to guarantee you that this is the best tilapia dish you’ll ever taste in your entire life. Just try it

Ginataang tilapia is a Filipino scrumptious fish and vegetable dish made special with coconut milk. It is made adding and cooking Fried tilapia to a simmered sauce made with coconut milk, garlic, ginger, tomato, mustard leaves, chillies pepper. while cooking the sauce is basted on top of the fish to spread the sauce evenly. This creamy milk can make any dish much creamier and better. With the addition of mustasa leaves, this dish is a hearty and healthy one, best served to all ages. Try and make one today!

HOW TO COOK GINATAANG TILAPIA WITH PECHAY

It’s very quick and convenient to prepare this recipe. Some recipe used to fried tilapia first, but I’m cooking tilapia with coconut milk for this recipe. If you have your own way of cooking the fish, go ahead and prepare it that way. I began by cleaning and removing the tilapia scale. By removing the innards of the fish, cut them from the upper portion of the fish, not from the belly, and wash them well. Then season the tilapia with salt and rub well so that the salt can absorb easily. Season the fish from one side to the other.

After seasoning, set aside the fish. In a bowl, we’ll make fillings for our fish by combining diced tomatoes, chopped onions, chopped garlic, minced ginger and salt and pepper to taste. Mix it well. Fill the fillings on the belly of the fish and the head of the fish. Set aside the remaining fillings. I put a whole piece of pechay in a plate and wrap it to the tilapia. Just enough to cover the tilapia. But this part is just an optional method. It’s up to you whether or not you want to wrap it.

Place the chopped pechay in a frying pan and arrange the tilapia properly on top of the chopped pechay. Add the remaining fillings. Spread the remaining fillings well. Add the vinegar and the water to boil. At this point, we’re not going to add any salt as we’ve already seasoned the tilapia. Turn the heat on in a medium heat and let the water boil. Add the coconut milk when it is boiled.

Fish sauce can be optional ingredients, but this will help to improve the flavor of your fish. But if you don’t want to use a fish sauce or a patis, it’s all right. You may also add any chilis at this time if you want to make this recipe spicy. Then continue scooping and pour the coconut milk again on your tilapia for at least a minute, then cover the pan and simmer until the sauce is reduced and thick.

Once it’s reduced and thickened, scoop and pour the coconut milk over your tilapia again for a minute and turn off your fire and our ginataang tilapia with pechay is ready to serve. This recipe is best eaten while it’s warm. Enjoy it!

How to Cook Ginataang Tilapia with Pechay (TAGALOG)