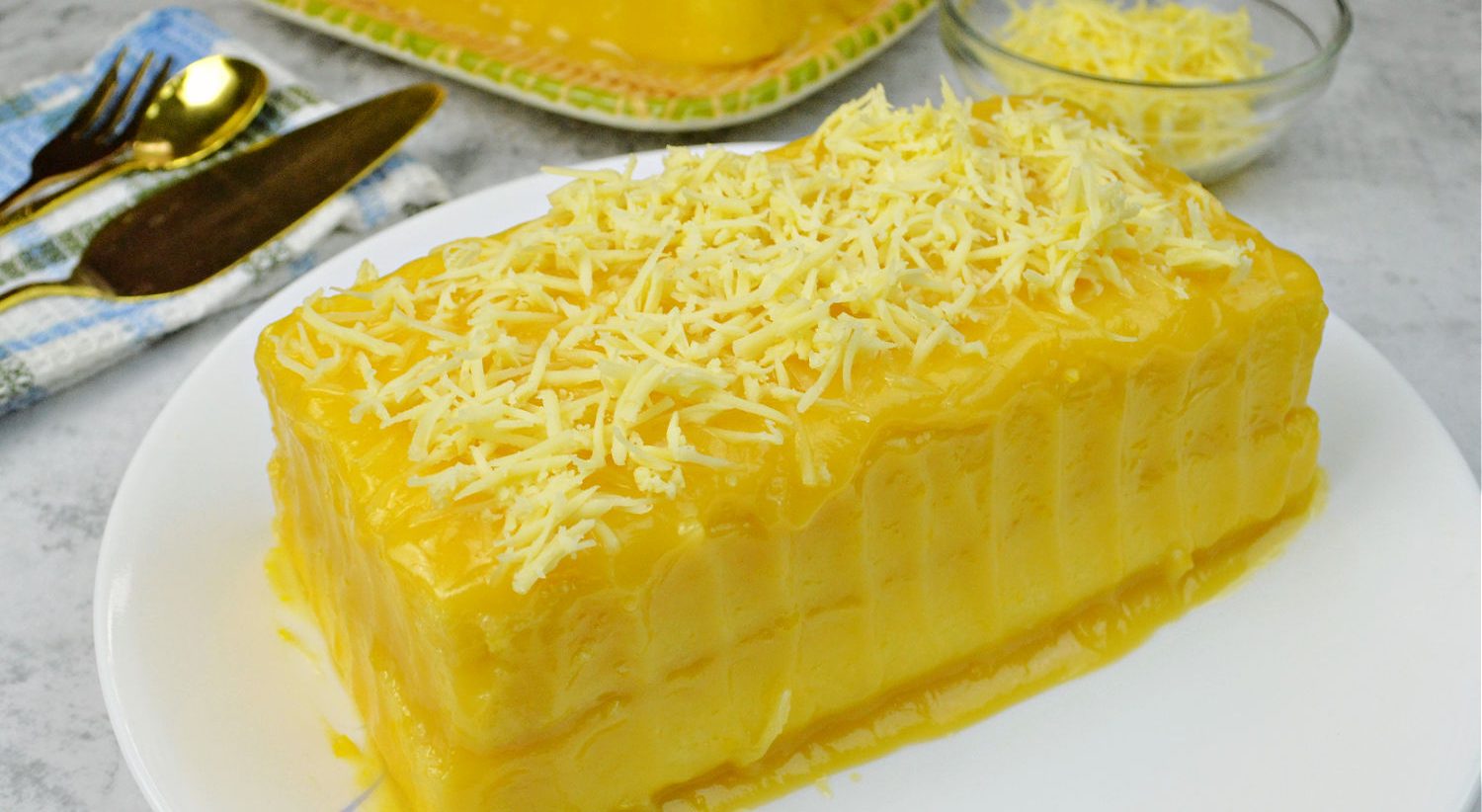 By YUMMYKITCHENPosted on January 5, 2021October 19, 2022
Jump to RecipePrint Recipe

Yema Cake is a soft Filipino cake and is made by a pan baking cake batter consisting cake flour, baking powder, salt, sugar, egg yolks, milk, coconut oil and vanilla extract and with Meringue made with egg whites, cream tartar and sugar. it has been frosted with yema frost made of egg yolks, condensed milk and evaporated milk. Follow our Yema Cake with custard frosting recipe to make this steamed yema cake in your home.

Yema takes a special place in my heart. The triangular 5-pesos yema candy was my favourite candy when I was a child. I always buy a box of it whenever we go to the market. Its sweetness makes it the perfect dessert for me after I eat a salty dish. I never knew what it is made out of when I was a child. I just know that it’s delicious, I like it and I will eat it. For me it was like the Filipino version of caramel.

Yema became a trend way back years ago. People got creative on where they would use the yema. Yema has been a lot of candy versions, a spread, a waffle filling and a lot more. It has been a flavor of ice cream. Yema became everywhere. But people never get tired of yema and continued creating new ways on how to enjoy it.

I first tasted a yema cake when my auntie brought one home. I like it but was disappointed a little because the yema frosting was thin and there is no frosting in the middle. That yema cake was like just a big sponge cake. Since then, I started imagining creating my own yema cake which I promised myself that I would put a lot of yema frosting in it.

I made my first yema cake just recently. I wanted to make a delicious one and show it to my auntie who introduced the idea to me. I got the recipe on the internet and gladly it was easy to follow. So I did what I promised myself. I made the perfect yema cake with a gorgeous amount of yema frosting. The triangular yema candy was the best dessert for me when I was a child but this yema cake is now my favourite now that I am an adult. Yema never gets old.

HOW TO MAKE YEMA CAKE WITH FROSTING

Start the cake batter by preparing two large bowls. On the first bowl, you are going to mix the dry ingredients. Start with combining the cake flour, baking powder salt and sugar. Sift the ingredients to ensure that there would be no lumps. The lumps could mean that some of the big granules are not fully-incorporated with the rest of the ingredients and may cause a change in the texture of the cake. On the second bowl, mix the wet ingredients. Add the egg yolks, milk, coconut oil, and vanilla extract. Do not throw the egg whites from the eggs since it would be used for the meringue. For the milk, you can use evaporated milk or fresh milk. Combine the mixtures from the two bowls and mix well until it smoothens. The initial cake batter is now prepared. Set it aside.

The meringue adds creaminess and airiness to the cake batter. It is prepared using only three simple ingredients. Grab a large bowl and place the egg whites. Beat the egg whites in high speed using a hand mixer. As the egg whites make a foam, add the cream of tartar. In baking, cream of tartar is used as a leavening agent which causes the puto to rise and expand. It also adds to the creamy texture of the meringue. This will also make the resulting cake even creamier. Add in the white sugar and beat the mixture until it reaches stiff peaks. To check if the egg whites you are whipping are in stiff peaks, try to turn the bowl over. If the egg whites does not drop, then it has reached the right stage. The meringue is now done. Set aside.

Place the yema cake in a steamer and allow it to cook for 30 to 35 minutes under medium heat. If you will be using a llanera, only steam for 20 minutes. Do not open the steamer while it is steaming. The sudden change of temperature will cause some of the air from the cake to go out, eventually making the cake shrink. After 35 minutes, turn off the heat but do not take the yema cake out yet. Take off the steamer lid and leave the cake inside the steamer for about 10 minutes. By doing this, the temperature cools down slowly and the cake will firm its shape slowly as it cools down. After 10 minutes, you may remove the aluminium foil and allow the cake to fully cool down in a cake rack for frosting.

Yema frosting is the icing of our yema cake. A yema cake is called a yema cake specifically because of this frosting. In a pan, add 3 egg yolks, evaporated milk and all-purpose flour. The traditional yema candy is made using egg yolks and condensed milk only. The all-purpose flour was added to make the yema frosting a thick sauce. Mix these three ingredients well and then transfer to a pan. Cook under low heat. Stir continuously to avoid sticking to the bottom and burning. Add some salt to balance the sweetness. You may also drizzle some vanilla extract for added flavor. You may also add some lemon zest or any citrus flavor. The yema frosting will thicken after about 10 minutes of cooking. Turn off the heat and place the yema frosting in a container. It is now time to decorate our yema cake.

You can start decorating the cake when it has cooled down fully. Decorate and frost the yema cake however you like. In my yema cake, I cut the cake crosswise and placed some frosting in the middle and the top part of the cake. I also covered the whole cake with yema frosting. Add some grated cheese as the saltiness of the cheese compliments with the sweetness of the yema frosting. Cut your yema cake into serving pieces and enjoy eating.

How to Cook Yema Cake without Oven