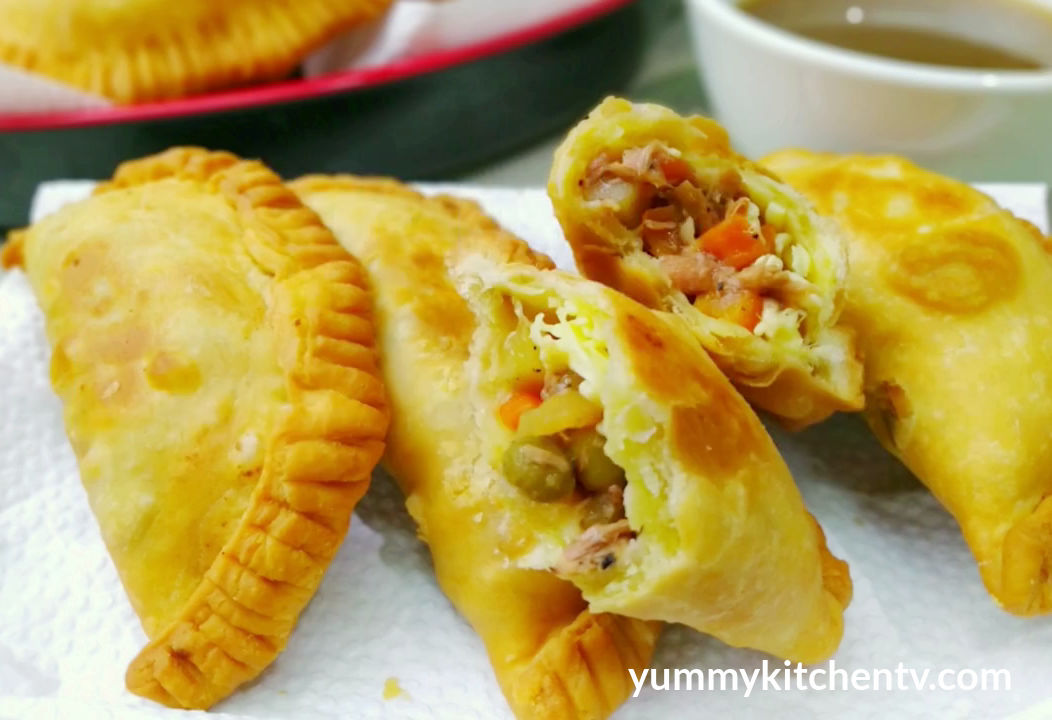 Tuna empanada is a empanada with a cooked filling made with tuna, potato, carrots, oyster sauce, green peace, onion, garlic, pepper, cheese and boiled egg. Here we used the home made wrapper made with all purpose flour, margarine, baking powder, sugar, salt and water to make this tuna empanada. The most distinct feature of empanada is its crescent moon-like shape holding the fillings inside. The concept of empanadas originate from Portugal and are enjoyed on their own but some special empanadas like the Ilocos empanada is enjoyed with vinegar.

Tuna empanada and other empanada flavors are very easy to acquire. They can be bought literally anywhere. My auntie always bring home empanadas as pasalubong. What made me want to make my own empanada is that those empanadas brought by my auntie either has too thick pie crust, too small amount of fillings or not crisp due to too much oil. After then I knew I want freshly-cooked empanadas.

So much for my empanada story. I made my very first empanada when I was in high school. I brought them as a snack for our mini field trip. I actually made three flavors and one of them is tuna. I chose to bring empanada since it is a very handy snack and you could also eat it fast. I fell in love with empanada the second I took a bite on the very famous Ilocos empanada. I learned how to make the pie crust and experimented on different fillings.

I did not perfect my empanada the first time I did it. The fillings were easy but I struggled with the flakiness of the pie crust. I have read different versions of the recipes and realized that I was doing the pie crush wrong even before kneading it. I was not cutting a cold butter into the flour. It was a heavenly experience for me after I achieved the right kind of flakiness I want for an empanada. And since I can control what’s inside it, I experimented different flavors using my favorite food items. Tuna empanada ingredients selections should be fresh and the best quality.

HOW TO MAKE TUNA EMPANADA

The texture of the wrapper is important to compliment the softness of the fillings inside the empanada. To prepare for the wrapper, mix the all-purpose flour, baking powder, sugar and salt in a large mixing bowl. Mix the dry ingredients first before proceeding. Add the cold butter cubes in the powder mixture and cut. Cutting butter in flour (and with the other dry ingredients) means coating the butter to the flour. When the butter coats the flour, the raw butter creates little lumps which prohibits the gluten formation during the kneading process. This is important in producing a flaky texture in the resulting pie crust.

To cut butter into flour, make sure that the butter or margarine you are using is cold and solid. When you use melted of softened butter, it would create lesser lumps within the flour and would result to a less flaky pie crust. So grab your cold butter cubes, and mash it in the powder mixture using a fork. To manage blending the flour and butter more, use your hands. You’ll know you are done when there are no lumps, the butter is fully incorporated with the powder mixture and the mixture is slightly yellow in color. To make it into a dough, add ice water into the powder mixture gradually, 2 tablespoons at a time. The reason why ice water is used is to retain the temperature of the butter and for it not to melt. Again, to achieve a flaky texture of the pie crust. Knead until the dough is smooth. Form it into a ball and wrap it in plastic. Allow it to chill in the fridge for an hour.

While chilling the wrapper dough, prepare the tuna fillings. If you are using a canned tuna, drain the tuna. If you are using fresh tuna, cut the fish meat into small pieces. Prepare the other vegetables by chopping the potatoes and carrots. Heat some oil in a pan and sauté the chopped onions and garlic. Add the carrots and potatoes and continue sautéing. The potatoes and carrots are “hard’ vegetables and would take time to cook. Cover the pan and let it simmer for about 5 minutes to let the vegetables cook fully. When cooked, add the green peas if you prefer. Add the tuna and sauté with the rest of the vegetables. Season the filling with salt and pepper. When done, set aside and let it cool. Tuna empanada filling recipe varies greatly and can be enjoyed because of the taste.

Small steps left for the wrapper and the tuna empanada will be cooked. Grab the chilled wrapper dough. In a clean, flat space, dust some flour and lay the dough. The flour dusting will help to prevent the dough from sticking into the flat space. Start flattening the dough using a rolling pin. Try to flatten the dough as thin as possible. No one wants a thick crust for their empanada. When done, cut some circle-shaped dough. Use a bowl or something circle to use as a dough cutter. Remove the excess dough.