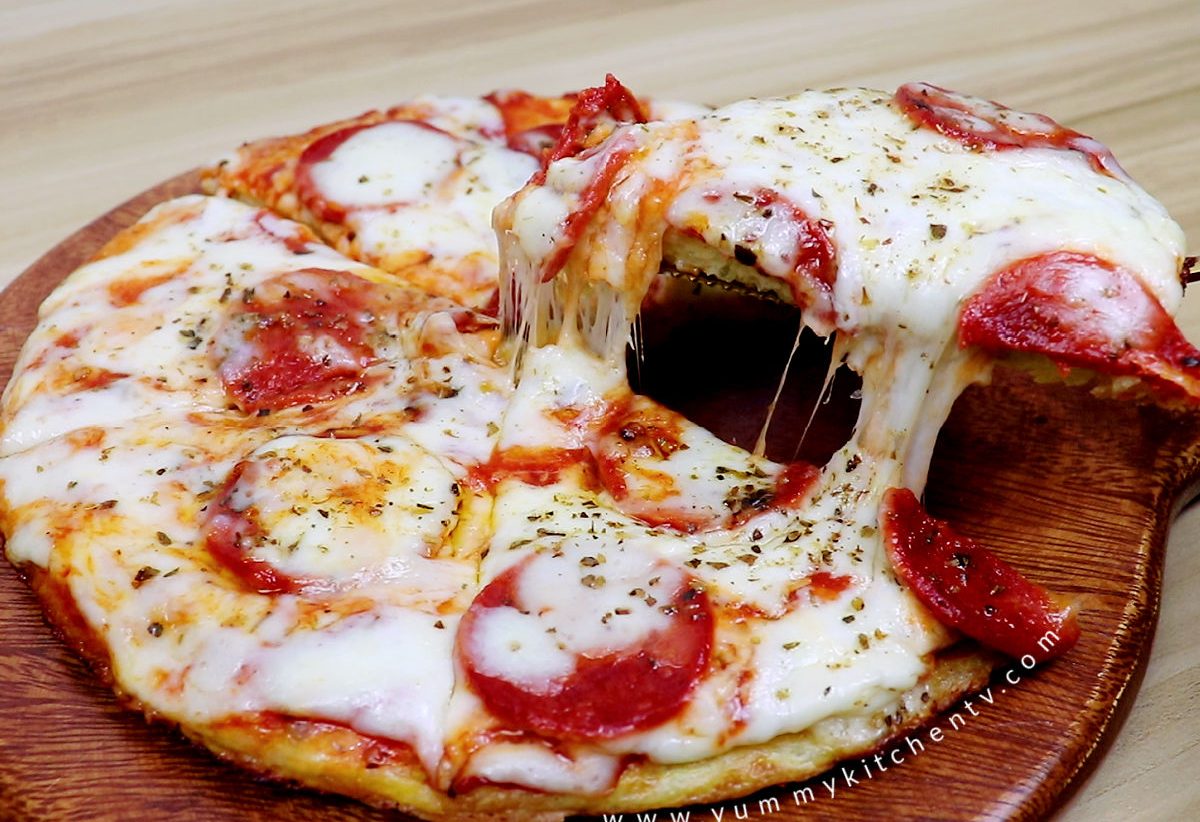 Craving for pizza but only have no time to bake the dough? Loving the pizza-potato combo? Fuse them into one and try using potatoes as pizza crust! Potato pizza is just like your favorite pizza but with potatoes underneath. This no-bake, no-hassle recipe will have your pizza ready in minutes! A fun time to try your favorite toppings!

Pizza is one of the best snacks ever. What I love most about pizza is that the crust can be a blank canvas where we can design with any topping we like. It can be protein-rich foods like meat, cheese and pepperoni or vegetables like onions, mushrooms and olives. And before, only pizza sauce are used in pizzas. Now, there are alfredo pizzas! There are still a lot more things we can do with pizza.

Aside from experimenting with the toppings, what if we experiment with the crust? I discovered this potato pizza recipe during another night craving with pizza. With no flour to bake and no bread to substitute, what else can I use as a pizza crust?

Pizza crusts are usually made with freshly-baked dough. It is similar to a regular bread but is a more flattened version and does not rise. It is lightly salted which matches the toppings and does not overpower it.

Thinking about these things, what other carbohydrate source can I use as a pizza crust? I was eating homemade french fries as I was thinking. Having extra supply of potatoes at home, I first tried making cut pizza out of thick potato slices. But of course it doesn’t really cook well through the potato. I then remembered how my mom made pinikpik (kamoteng kahoy patties) and tried to apply it with my potatoes.

My niece specifically hates the edges of the regular pizza. She told me that it is tasteless and has no sauce or toppings. Having potatoes as crust really suits people who doesn’t eat the edges of the crust. The edges of the potato crust is crispy and simply taste like a big chunk of fries. Add some ketchup in it and you will surely enjoy it!

Since my discovery of this potato pizza recipe, Friday night is now our potato pizza night. Fusing our favorite pizza and potato into one dish really helps if you’re craving for both at the same time.

If you want to try this potato pizza at home, try the recipe below and tell me what you think!

HOW TO COOK PIZZA IN A PAN

Pizza with a potato crust is much easier to make than a real pizza crust. And guess what? There is no kneading and baking involved in this recipe. Have your pizza ready in just a few minutes!

In this recipe, potatoes will play a great role as the crust. Prepare your potatoes and have them shredded or grated. In this recipe, I used the a peeler to make sure they will come out thin. Combine these potatoes with egg and flour. These two ingredients are important for the potatoes to hold itself together. The resulting potato will be like a bit of a potato pancake.

The last step and the most fun part is decorating your pizza! You can play with any toppings you like. In this recipe, I used cooked pepperoni, mozzarella cheese and some pizza seasoning. Cover the pan and let your potato pizza set. When the cheese has melted, then its done. Cut it into slices and share or eat everything on your own. You may have it spicy by adding some hot sauce. Yum!