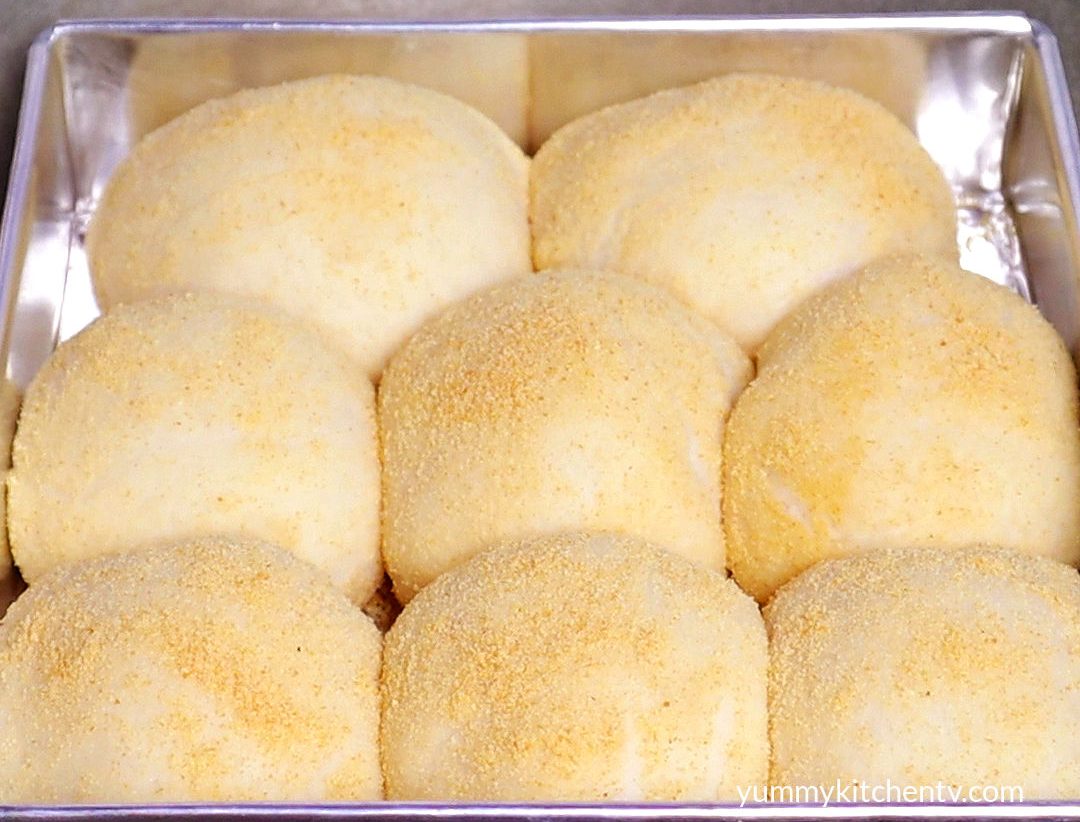 Is kuya panadero not here yet? Missing pandesal but stucked at home? Try this NO-OVEN pandesal recipe and make your first homemade pandesal today! Never ran out of this soft and fluffy pandesal. Truly a favorite!

Pandesal may be a regular bread for some but it is my go-to breakfast if I cannot think of something to eat. The word pandesal is actually a Spanish term for “salt bread”. Pandesal is very flexible since you can eat it as it is or cook some eggs for filling. I started to really appreciate pandesal when I became an adult. I hated it as a kid because I feel like I’m a lola already. Pandesal really brings a lot of childhood memories as I eat it while drinking my morning hot chocolate and watching Unang Hirit.

Pandesal is a very affordable bread and you can buy just as many as you like. But there are just some mornings where our favorite kuya panadero is late or absent. By then we miss pandesal so much. Learn how to make this no-oven pandesal at home to always have a stock of pandesal whenever you like!

HOW TO COOK NO-OVEN PANDESAL

Unleash the inner baker in you! Do some arm workouts to prepare your arms for a lot of kneading action.

Like some pastry products, yeast is needed to make the resulting pandesal fluffy. Good thing that there are available dry active yeast which is very easy to use. To prepare a yeast mixture, just mix some warm milk, sugar and the dry active yeast. There are so much science going on behind the yeast mixture and this blog would be so long if we included that. After you prepare the yeast mixture, time to make the actual dough.  Basically you are going to mix all the dough ingredients until you make a shaggy dough.

Now it’s time for some kneading action. Do not be too intimidated with all the kneading needed to make a nice pandesal. There would also be rest time to allow the gluten to relax and give you a soft and fluffy pandesal. Knead the shaggy dough for the first time and add some oil before you knead it for the second time. Make sure that the oil will be completely incorporated in the dough. The next few steps will involve alternating dough resting and kneading. Then, you will portion the pandesal into serving pieces. Before you actually bake the pandesal, you will be needing to roll the dough in breadcrumbs and rest for the last time in a baking pan.

Here we present you a hack on how to bake pandesal without an oven. You will technically imitate the environment on the inside of an oven by preheating a pan and then cooking the pandesal indirectly from the heat. Let it cook for 15-20 minutes or if you want a brown bottom, 20-25 minutes under 350F or 180C. If you have an oven, you can still use this pandesal recipe and bake your pandesal for 15-20 minutes using the same temperature.

After baking, remove the pandesal from the pan/oven. Let the pandesal cool down a bit and then you can enjoy it. Some people want to eat freshly-cooked hot pandesal and if you’re one of them, just skip the cooling down part and enjoy your pandesal with some hot coffee or tea while watching the sunrise.

Watch how to Cook Pandesal without Oven

How to Cook Pandesal without Oven (TAGALOG)