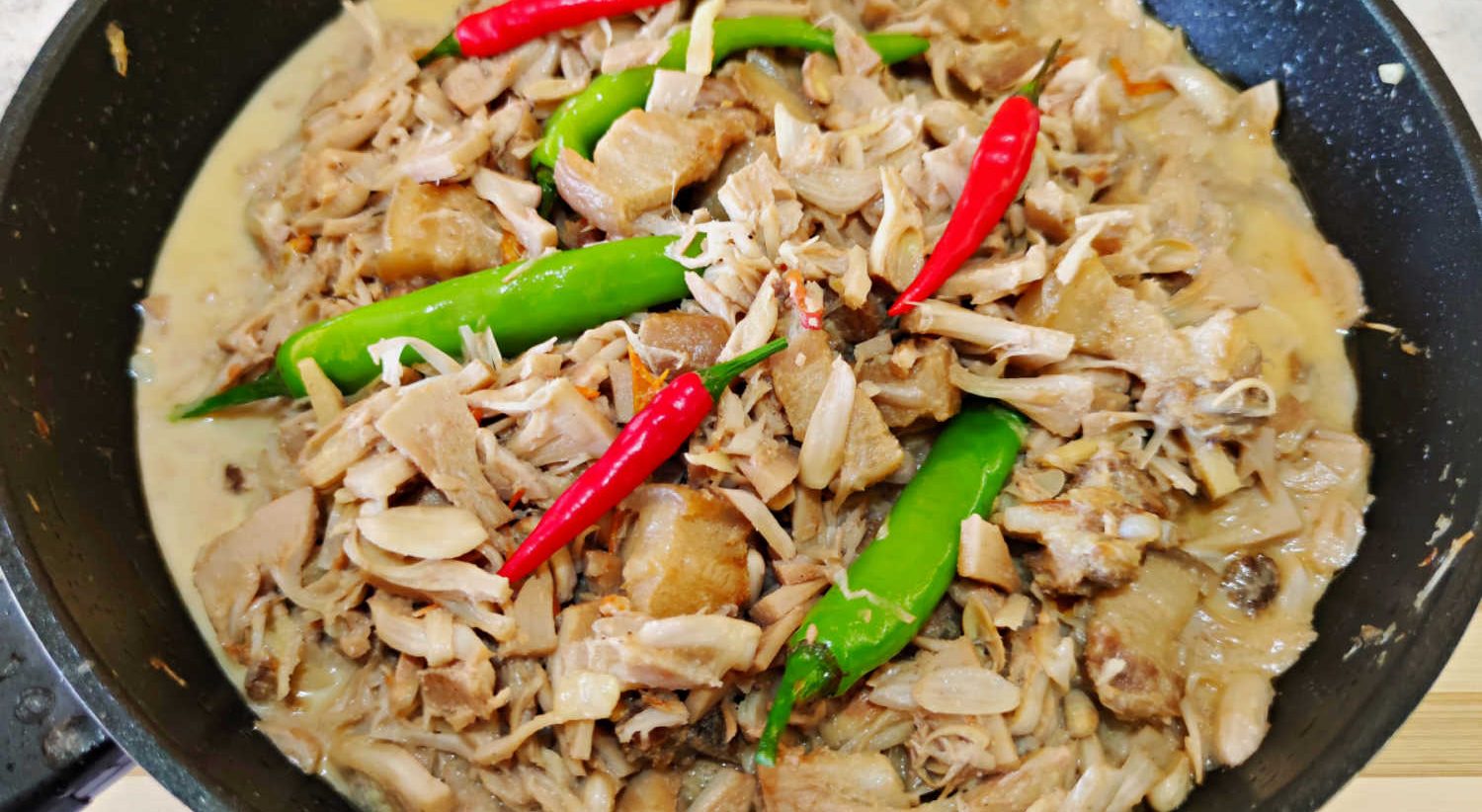 Ginataang Langka with Pork is a delicious Filipino creamy coconut stew, made with pork, unripe jackfruit, coconut milk, fresh shrimp paste, onion, garlic, ginger, tomatoes, fish sauce, pepper, green chilies. This vegetable dish is pure white which can be made spicy by adding both red and green chilies. Best served with hot steaming rice and can also be used as a palaman for bread and pandesal. Many people are curious on how to make ginataang langka since it is one of the best hits in karinderyas. Jackfruit is not really too common at the market which is why dishes made with it are considered special.

Langka or jackfruit is a less prepared and eaten fruit as it comes as a very large fruit with spiky skin. Just like any other fruit, the ripe jackfruit is yellow and sweet and is eaten as it is. When unripe, jackfruit is used more like other vegetables. It has a firm texture when raw and a shred-y texture when cooked. This makes it a good ingredient for a lot of dishes. One of the most popular dishes which uses unripe langka is the ginataan.

The word “ginataan” came from the Tagalog root word “gata” or coconut cream. Ginataang langka is a classic dish made by braising unripe jackfruit in coconut stew. It is a common dish in karinderyas and I bet you have tried this at least once. This dish appears to be creamy white with some bits of green brought by the chopped siling pang-sigang.

Ginataang langka is one of my favorite jackfruit dishes. Aside from it being the most famous way of cooking unripe jackfruit, what I really like about this dish is the simple light and creamy flavor. This is one of the dishes which literally gets everyone in our family at the table when served.

We rarely prepare this dish as we wait for the jackfruit in our backyard to get big enough. But when we make this dish, we make a really large batch of it since we make use of the whole fruit. Time to call our big “talyasi” as we make ginataang langka.

Since we needed to adjust our dishes to soft ones for our lola, we stopped waiting for the jackfruit outside to grow and just buy jackfruit from the market. Given that ginataang langka is so soft, my lola likes this very much since her teeth can still tolerate it (Haha J). Since then, ginataang langka had become a daily dish for us.

If you wanna know how this famous dish is made, continue reading the recipe below.

HOW TO MAKE GINATAANG LANGKA

Preparing ginataang langka is similar to preparing other ginataang dishes. If you have experienced making a ginataan dish, this will be a super easy job for you.

There are two main ingredients in this dish—the jackfruit and the coconut milk. Make sure to use fresh UNRIPE jackfruit. There are pre chopped unripe jackfruit which can be bought from the market but the best and freshest are the ones you personally chop at home. Since this dish involves using both thick and thin coconut milk, I recommend you to buy a whole niyog in the market and make a request to grate them and then do the squeezing at home. In this way, you can have the thick and thin coconut plus a bonus of coconut water which you can drink alongside your ginataang langka.

Start by preparing the pork belly. Seared pork belly will make the dish more savoury and adds intense meat flavor. But if you want a meatless dish, you can simply omit this ingredient. Make the sauce base by sautéing the aromatics and the fresh shrimp paste. Remember to wash and rinse the shrimp paste before adding to the pan. This is also to reduce the saltiness to an amount that is just perfect for the ginataan.

Now is the time to add the main ingredient—the jackfruit. Make sure to use unripe jackfruit. Use the thin coconut milk (the second piga) to cook and make the jackfruit soft. For the next steps, all you needed to do is to add the thick coconut cream (the first piga) and the pork belly. You may add chilies if you like.

Make sure to prepare a lot of hot steaming rice before you serve this dish. If you haven’t tried using it as “palaman” for bread, you’re missing out a lot and better try it now!