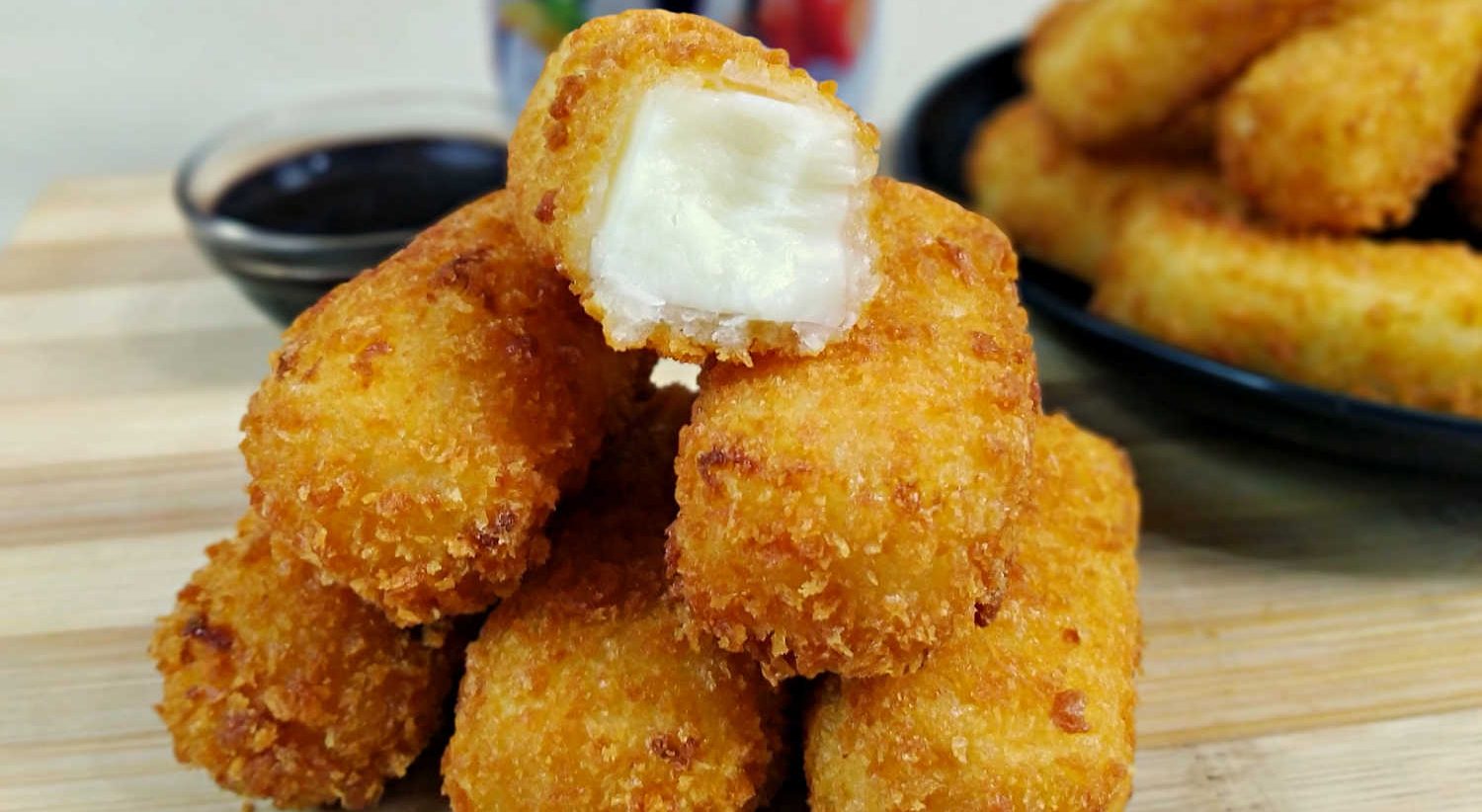 Fried milk is a Chinese dessert, gold and crisp on the outside, and soft and white on the inside with a milky flavour, is a traditional Cantonese dessert from Shunde, Guangdong Province. This fried milk is made off by oil frying the mixture made by full cream milk, sugar, corn starch, all purpose flour, bread crumbs. Treat your taste buds with a new and fun milk dessert! Sweet and creamy custard pudding is firmed, coated and deep-fried for some crispy and milky melt-in-your-mouth goodness.

Milk is one of the staples in my fridge. I love milk so much that I think I can drink a whole liter in a day. But of course, we should always drink what’s only recommended per day. Aside from its creaminess, the best thing about milk is its nutritional benefits. It is a protein-rich liquid which is also high in calcium, potassium and many more. Even with my massive love for milk, sometime just drinking milk gets a little boring. This is why my universe literally shook when I knew about fried milk.

The first time I heard about fried milk, I said a very long “Whaaaaaaaaaaaat?”. Some of my questions were, “How can you fry milk?”, “Are you sure it is milk?”. I bet many of you had similar reactions. I saw a cooking recipe of this dessert on my social media feed. I instantly became a curious cat as it was introduced as a business snack. Watched a lot of video and they all share the same recipe. This was one bizarre snack which I cannot wait to try.

Fried milk is a star dessert most commonly found in Chinese bakeries and was believed to originate from the Cantonese cuisine. Spain has a version of this dessert which they call “Leche Frita”.

To answer the most intriguing fact about this dish, the milk used in fried milk is actually a sweet, firm, cold milk pudding. This creamy custard is coated with breadcrumbs to have a crisp outside layer and an inner layer which is soft and sweet.

With this new way of enjoying milk, this fried creamy custard is a must-try. Try making some today and serve it with some vanilla-caramel sauce. Your kids will surely love it!

HOW TO MAKE FRIED MILK

The only goal of this dish is to make a creamy and milky sweet pudding and then deep-fry it.

Before anything else, prepare a greased tray. This will be quick later and this tray is important. Start by making sweet milk in a pot. I personally recommend using full-cream milk. This is the creamiest type of milk next to whole milk.

Just a quick fact. The creaminess of the milk depends on how high its fat level is. The higher the fat content, the creamier the milk. You can notice the labels on the milk packaging when you go to the milk aisle in grocery stores. The ones labelled “lite” or “less fat” has lower fat content and are less creamier. Meanwhile, those labelled full-cream milk and similar has higher fat content and are creamier. If you want to achieve a really creamy version of your fried milk, use full-cream milk.

Thicken your sweet milk mixture using cornstarch. When sticky, immediately transfer to the greased pan. At this point, the consistency of the milk is similar to newly cooked maja blanca. Chill the milk to make it firm and easy to cut.

After chilling, the consistency of this fried milk will be similar to a fresh tikoy. Cut the milk into serving portions. Prepare a milk batter and a plate with bread crumbs. Drench the milk in the coatings and deep-fry. Only use low to medium heat while frying to avoid burning the milk.

Once the fried milk are brown and crispy, serve them immediately to enjoy that crispy and milky dessert. You can eat it as it is or have some vanilla-caramel sauce on the side.