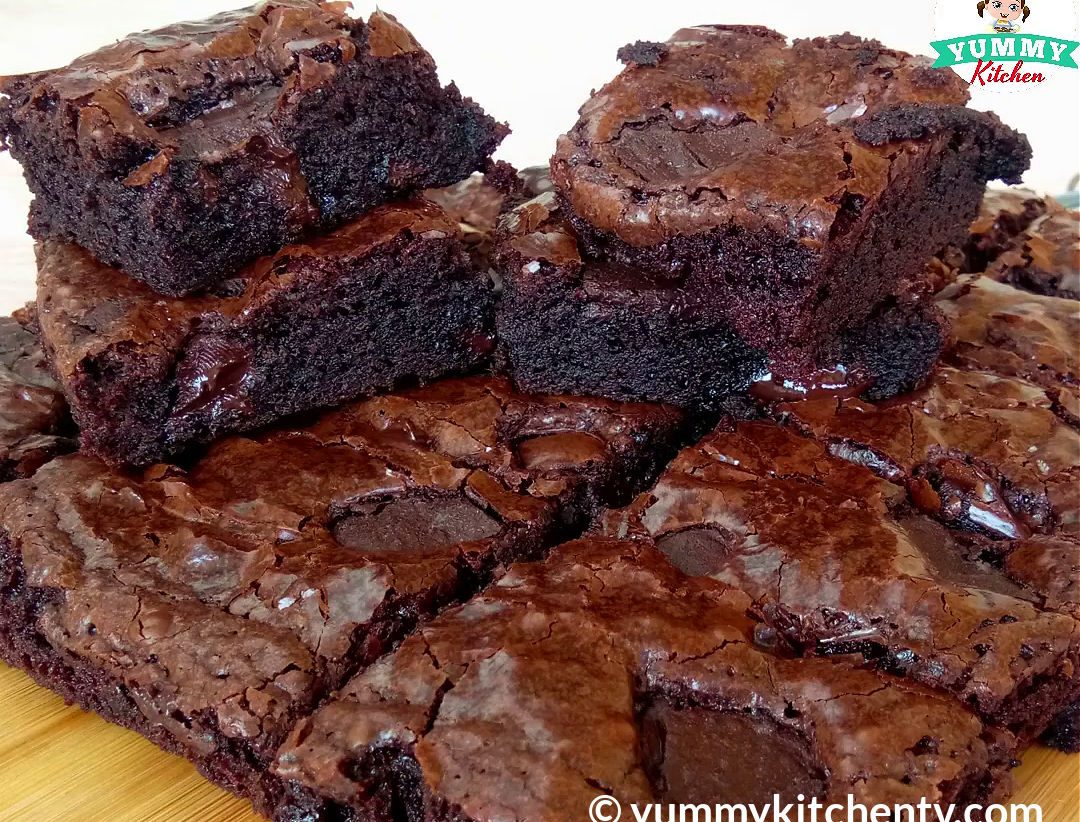 By YUMMYKITCHENPosted on January 8, 2021October 29, 2022
Jump to RecipePrint Recipe

Fudgy Brownies is made by baking a brownie mixture made with all purpose flour, sugar, butter, eggs, cocoa powder, chocolate and salt. Chocolate Brownies is very popular in United stated and all over the world. Follow our Chocolate Fudgy Brownies recipe to make this scrumptious dish in your home for your family and relatives.

Chocolate Brownies are a highly popular sweet baked confection that originated from the United States. It is a bite-sized or a small piece of moist chocolate goody garnished with different flavors such as nuts, cream cheese, or chocolate chunks. Surprisingly, the special recipe for this delicious snack was yet to flourish until the early 20th century. It is considered a part of the cookie family and not a type of cake. This is because chocolate brownies are to be eaten as finger foods like cookies rather than with a fork and a plate. Another w-o-w fact is that the recipe of brownies did not have any chocolates at all!

Cakey or Fudgy? — this has been the undying debate that sweet tooths love to argue about in terms of the best brownie texture. Being a brownie-lover myself, I can speak up my side for this as well. Without having second thoughts, fudgy texture it is!

How to Make Chewy Fudge Brownies

For the chunky brownies to achieve that satisfying fudginess, a clear recipe guide is utmost essential. The ingredients must be complete and with perfect measurement. These ingredients include flour, sugar, melted butter, eggs, cocoa powder, chocolate bar, and a pinch of salt. With that, let’s make the batter!

Initially, the chocolate bar should be divided into a melted one for the batter flavor as well as chopped into chunks for the brownie dressing. Make the batter by combining the melted chocolate, cocoa powder, and baking ingredients like flour, baking powder, eggs, sugar, salt, and butter. Mix well until evenly combined and smooth in texture. Pour this into a lined baking pan and tap thrice to get rid of air bubbles.

Bake this in a 180°C preheated oven for 25-30 minutes. Make sure to poke the middle using a toothpick to check the doneness of the brownies and it should come out clean. Slice into square bars and make sure to reserve one for yourself. Enjoy!