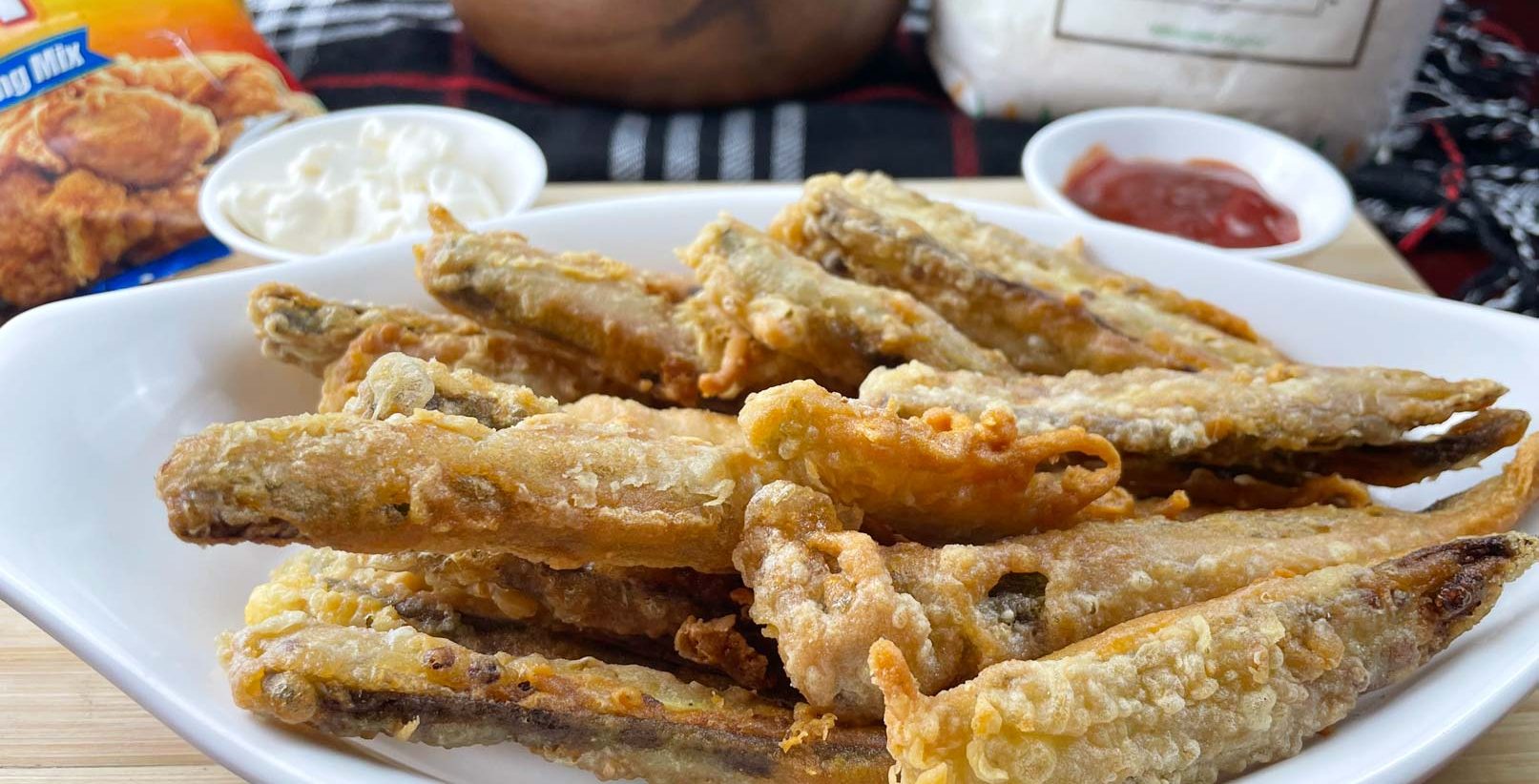 Crispy Okra is made by deep frying fresh okras in olive oil after coating it with a batter made with all purpose flour, corn starch, breading mix, ground black pepper. Crispy Okra is one of the tastiest and healthy dish you can make with Okra. While these staple veggie is commonly seen in Filipino kitchens, these cooked to fried golden strips are a popular delicacy in South America. This yummy kitchen Crispy Okra recipe will show you how to cook Crispy Okra very easy and simple way.

What is an Okra?

The Okra, or ‘Okro’, sometimes even called ‘ladies fingers’ is a flowering plant that is valued for the edible seedpods as well as it’s many health benefits. The origin of Okra is said to be around Ethiopian, South Asia, or West African, mainly cultivated in tropical or subtropical lands and has a notable part in Southern American, Indian, and Middle Eastern cuisine. The name ‘okra’ came from the word ‘ókùrù’ the word was first used in the American vernacular and recorded round the 1805. But some also say that this originated from the word ‘ki-ngombo’ from Cuba and Puerto Rico, whom made a dish called quimbombo which is a stew similar to a Southern gumbo. The geographical origins of the okra is still disputed, with many believing it has either Ethiopian, West African, or South Asian origins. With some suggesting it might have been from Arabia or Egypt, calling it ‘bamya’ having these since the 12thor 13thcentury. An earlier account stated by a Spanish Moor who visited in 1216, Egypt, describing the plant cultivated by the locals who ate these young pods with their meals. Believing that from Arabia, this vegetable spread its swings to the shore of the Mediterranean Sea and onwards to the east. Introduced to America from the ships operating the Atlantic slave trade in 1658, which was recorded in Brazil and documented in Suriname. As far as many origins have been given or researched to have been where the okra has started one common knowledge is that these are cultivated and planted In temperate climates, these plants are ‘mucilaginous’ which gives them a ‘gooey’ or slime like characteristic, as well as soluble fiber. These green pods can be eaten in salads, raw, sautéed or fried by itself or with other ingredients, steamed, or added in a dish for more fiber or as a filler. Many also use dried okra to chicken sauces or use as an egg white substitute. Some roast the seeds to use them as a non-caffeinated coffee substitute. Many consume Okra for the sake of the nutrients it can give. Vitamins like Vitamin C, K, antioxidants, helping in lowering blood cholesterol and control blood sugar levels also entice many to try and add this vegetable into their weekly or even daily consumption.

All in all the okra has been associated with Southern American food, being dredged in cornmeal seasoned with spices, and then fried. This vegetable is also prevalent in Indian cuisine, and Filipino dishes. From simmering, stir-fry, sautéing, steaming, deep-frying, using is as a filler to sip up the sauces, or to add some fiber into your diet. The Okra is a vegetable that’s easy to mix into dishes, as well as make it a main ingredient as itself.

How to make this Crispy Okra recipe?

All you need to do this Crispy Okra recipe is wash the okras, straining them to make sure these are dry enough to add in the batter later. Slice the top part since these are usually hard and we just want to use the soft parts,  slicing these lengthwise to really remove any slimy aftereffect when its cooked, since we’ll be frying these slicing these in half will make sure the inside is really crisp and fried. Mix this into a batter made of flour, cornstarch, breading mix, and black pepper, and water. Dipping each of the okras in and deep frying it into oil and taking it off the pan one they’ve browned. Serve freshly fried.

This delicious recipe makes for a great side dish, crispy lunch, or even as an appetizer or beer snack.

These crispy ladies fingers makes for a great afternoon snack

While many have tried looked the other way when one introduces them to okra. This Crispy Okra recipe is sure to lure them back in. Just dip the okra in the batter of flour and some spices, fry them to a beautiful golden crisp and your ready to serve this in a platter with some sauce or as is. A helpful recipe to add this into your meal plans especially for picky eaters and kids who need something their veggies hidden from them.