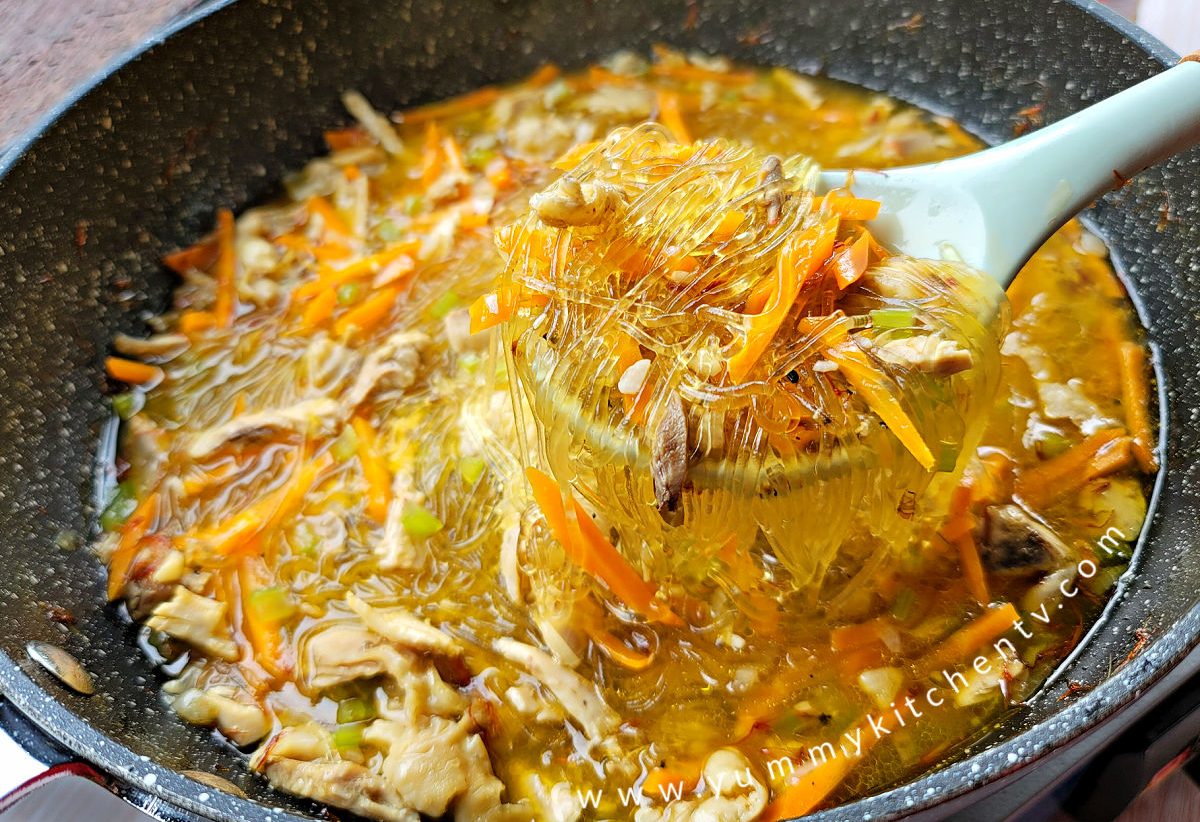 Chicken Sotanghon Soup is made with shredded chicken and sotanghon noodles. Carrots, chopped onion, minced garlic, celery stalks and chicken broth cube and is seasoned with annatto seeds, bay leaves, fish sauce, pepper. This Filipino chicken noodle soup is so popular and make this Chicken Sotanghon Soup in your home by following our recipe.

CHICKEN SOTANGHON SOUP FOR THE SOUL

Every Christmas, one house in our neighborhood makes an effort to cook a large talyasi of this chicken soup to feed the children (and adults too). We don’t really have a formal tasking on who to do it but we just do.

I can still remember the young me falling in line in front of my neighbor’s house, waiting for my turn to have some sotanghon. Now, I am one who cooks for the children. How time flies so fast! For me, chicken sotanghon really holds a special place in my heart.

If you want to make a simple soup which can warm not just your tummy but also your soul, try and make some chicken sotanghon soup today! Read and follow the recipe below. Have fun!

HOW TO COOK CHICKEN SOTANGHON SOUP

Making sotanghon will take a few hours until done, but the steps are super simple and straightforward. First, we are going to make homemade chicken stock. To do this, simply boil your chicken in water. Add some laurel leaves in there for extra aroma and flavor. The best parts of chicken to use are the bony parts like ribs, thighs and legs so we can get that super chicken-y flavor from the bones.

Quick fun fact: The chicken stock used as the base for sauces is actually made by boiling just the chicken bones for a long time. That’s how flavorful chicken bones can be!

After boiling the chicken, flake it and remove the bones. We are going to add these flaked chicken in the stock later. Some people I know still includes the bones in the final soup. But it is quite disappointing having too many bones in your bowl so it’s better to just remove them.

As you prepare the soup base, soak your vermicelli noodles in water to soften it a bit. I tried not soaking them first and it took extra time to fully cook when compared to the soak ones. Make sure that the water you’ll use is warm and not hot, as this can make the noodles sticky.

Saute your aromatics and celery stalks. If you have leftover vegetables, grab them and also include them in this dish. To achieve the full chicken flavor, I used chicken broth cube but this is totally optional. The last thing to do is to cook the sotanghon noodles in the chicken broth.