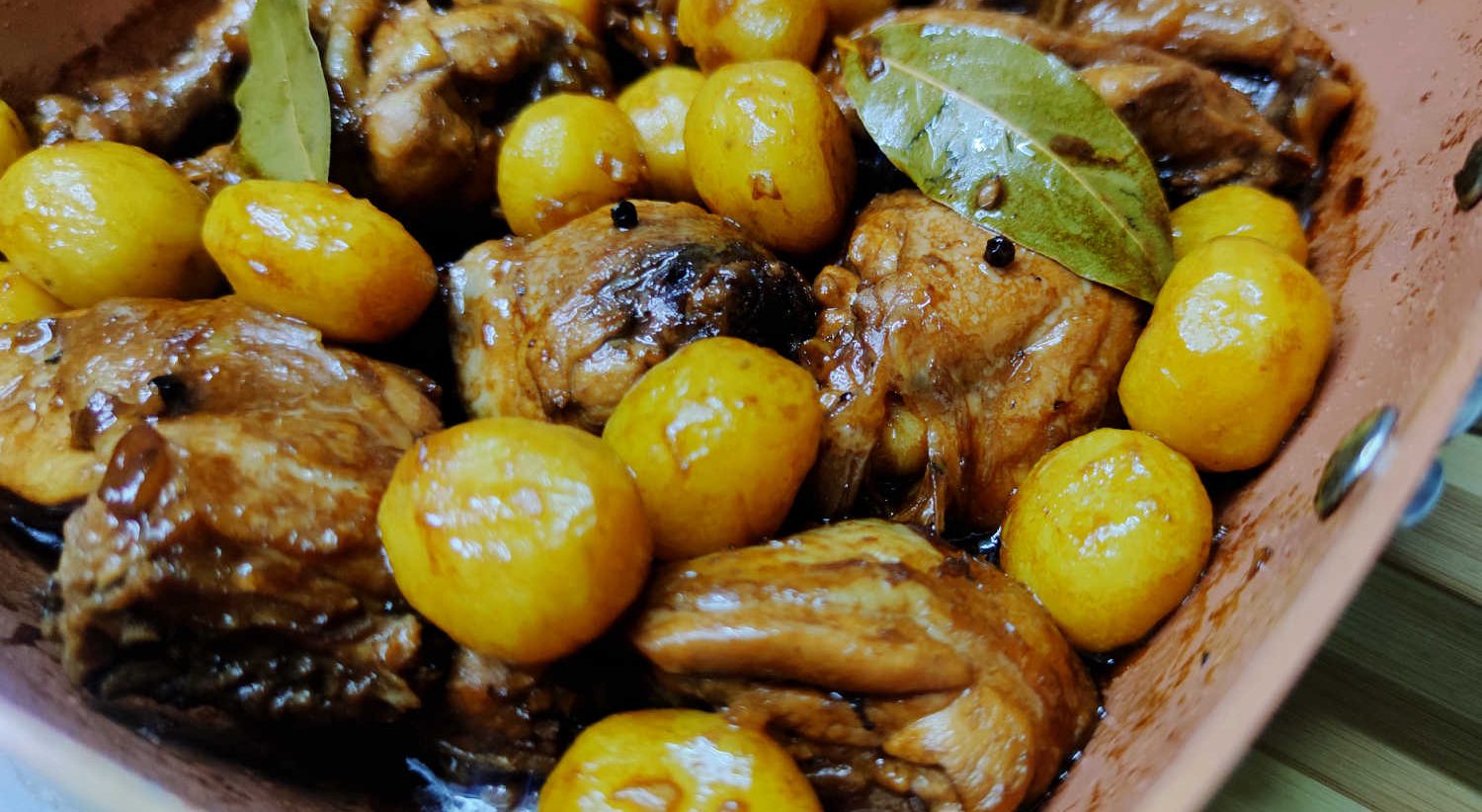 Chicken coke adobo is a modified classic chicken adobo were the famous coca-cola is used for a unique caramel savoury sauce which coats the soft and tender chicken pieces. It is best eaten during lunch or dinner with a lot of hot steaming rice.

Who here likes chicken adobo with nagmamantikang sauce? If we are gonna make a fan base for chicken adobo lovers, I would to volunteer as the president.

Chicken adobo might be considered the national dish of the Philippines. It is one of the widely known dishes since it involves very simple ingredients and very easy preparation. This dish is called adobo since it uses the inadobo style of cooking wherein meat is cooked in a mixture of vinegar and soy sauce until soft and tender. For those who like their adobo with a hint of sweetness, some flavor ehancers which are commonly used in adobo are pineapple juice, pineapple tidbits and sugar. Adobo made with these ingredients all taste good! But haven’t you thought of using coke, yes, the softdrinks, to sweeten your adobo? Try this chicken coke adobo recipe and prepare to be amazed with the caramel sweetness brought by the cola in your adobo.

HOW TO COOK CHICKEN COKE ADOBO

Cooking chicken coke adobo share the similar steps on making the classic chicken adobo. The only difference is the sweetener used in this recipe will be the coke or the coca-cola. The cola has a distinct caramel sweetness which can give a unique layer of flavor for the chicken adobo. Who would have thought that cola goes well with chicken?

Prepare your chicken pieces. There are no rules in choosing a meat cut but the thigh and leg parts were the best to use in chicken adobo since they are much more tender and juicy compared to other parts. To ensure that our chicken would be flavorful, we are going to marinate it in a mixture of vinegar, soy sauce and cracked black pepper. This umami marinade will also be our sauce base for later. Marinate the meat for at least an hour or overnight for a more flavorful chicken. You can actually skip the marinating part if you are in a rush. Chicken easily absorbs flavors.

While waiting, prepare your potatoes by frying them until light brown and then set them aside. If you have cooked chicken adobo before, the following steps would be familiar to you. Sear the chicken and then set them aside. Searing will also add chicken flavor to the dish. Transfer the chicken from the pan and sauté the aromatics. Make sure that you crush the garlic for garlicky goodness! Return the seared chicken back to the pan and sauté with the aromatics. Add the sauce base, the reserved marinade. Just add more peppercorns and bay leaves for a more powerful flavor. Add some water and a 200-mL bottle of coke. The magic starts as the chicken adobo simmers. The sweetness from the cola will slowly sip in the chicken and will enhance the sauce. After simmering, add the fried potatoes. Coat them with the nice and sweet sauce and you’re basically done. Do a last set of simmering and you can now transfer the chicken coke adobo in a serving dish. Make sure to prepare a whole lot of rice! Enjoy!