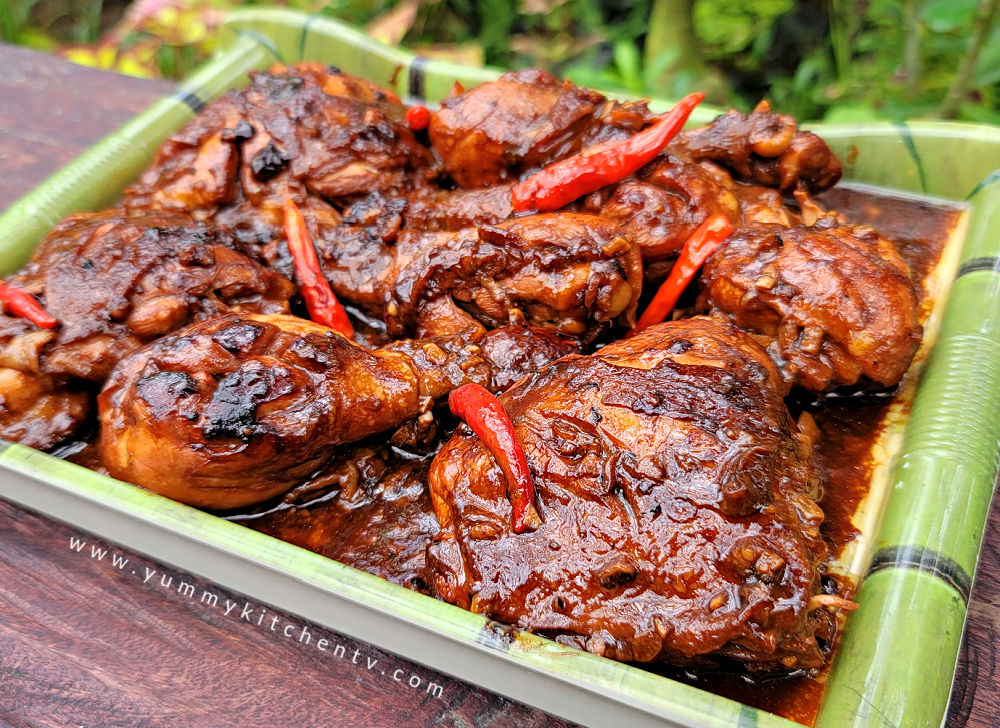 By YummiesPosted on December 5, 2021November 26, 2022
Jump to RecipePrint Recipe

Braised BBQ Chicken is a sweet and savoury chicken barbecue is made with tender cuts of chicken braised slowly in a Pinoy-adapted barbecue marinade. With the browned and caramelized crust, skew these in barbecue stick and no one can tell the different with the grilled one! Best served with rice and some atsara on the side. So try this no-grill, no-hassle braised barbecue chicken! Yum!

Grilled foods are one of my favorites but the actual grilling isn’t. While grilling is kind of fun, the main disadvantage of grilling for me is that I smelled smokey like I was the one getting on the grill.

Before the birth of this braised barbecue chicken recipe, I usually have a bit difficulty in grilling since we do it in the traditional way, blowing the charcoal until it continuously lights up. That process really takes up energy, you know.

It was really funny (and a shame) how I did my first braised barbecue chicken. I was actually making some braised chicken but forgot I was cooking. The sauce really dried up but I was lucky that the chicken are not really that burnt. The crust is just caramelized fine and the taste was not affected. It had this smokey aroma even without grilling.

With that, I officially tried this braised barbecue chicken (not forgetting it this time). This dish became a family regular especially that we love grilled foods. We also tried this with pork. Better than grilled regaring flavor and ease of preparation.

If you also want to prevent the hassle of grilling, try this braised barbecue chicken and follow the steps below.

HOW TO MAKE BRAISED CHICKEN WITH SPRITE

Braised barbecue chicken is one the easiest and tastiest among the braised dishes.

In this recipe, I used bony parts like thighs and legs. Making slits on them are highly suggested to ensure that both the marinate and the oil will go through the chicken to prevent being undercooked or bloody,

Marinate the chicken in a mixture of different seasonings. The special ingredient we included in this recipe is the lemon soda. I used Sprite. This soda adds sweetness to the marinade and helps tenderize the meat. Massage it to the chicken and let it sit for a while before you cook.

Sear the chicken first before braising. Searing adds flavor to the dish and seals the juices inside the meat. When the crust is browned, let the chicken cook in its marinade. This may take half an hour. Remember to flip the chicken to cook it evenly.

When the sauce is reduced, the chicken is done and you may now serve it.

To level up my braised chicken, I cook them a little more to look a bit like the real grilled chickenbarbecue. If you also want this, follow the next steps.

Simply reduce the sauce and cook the chicken on high heat until the crust caramelizes. It adds linamnam to the dish and a bit smokey flavor. The braised chicken barbecue is now really done. You may pour the reserved sauce over the dish or use it as a dip. Best paired with hot rice and some atsara on the side! Yum!