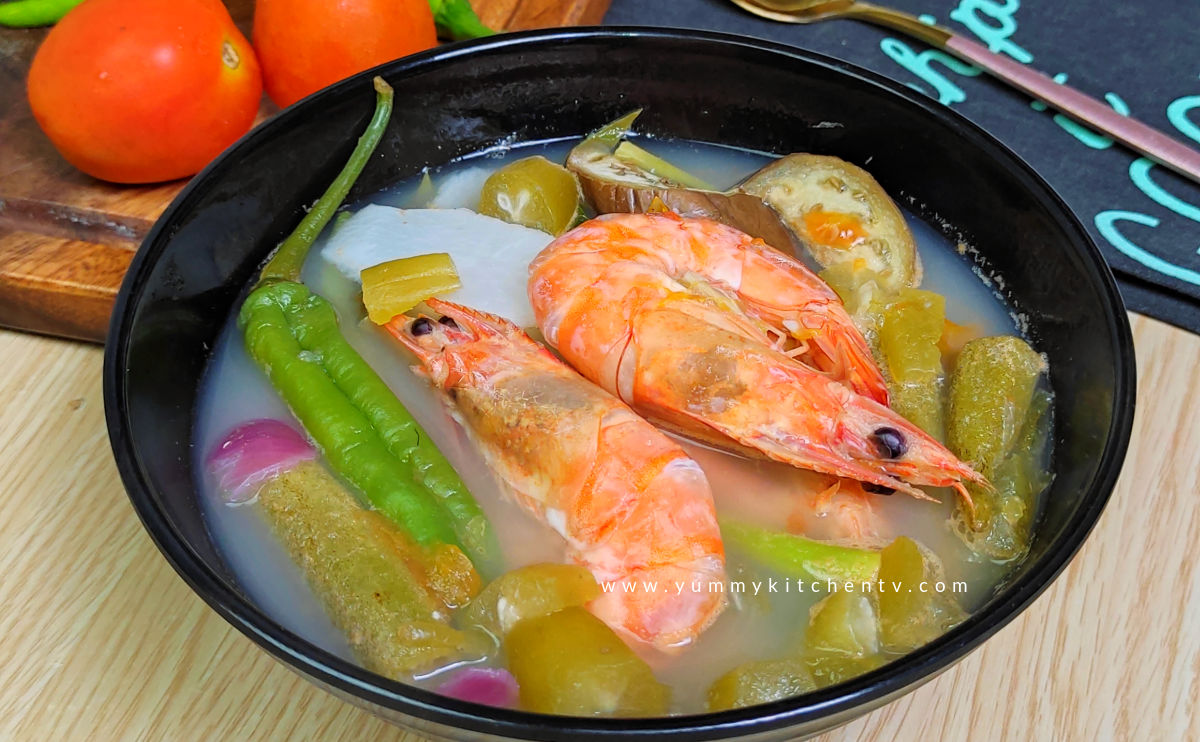 This sinigang na hipon sa kamias is a version of sinigang which uses fresh kamias to make the broth fruity, fresh and sour at the same time. The combination of fresh shrimps plus this fulfilling broth will truly give you a warm hug when eaten during rainy seasons. Try the sinigang na hipon using the recipe below. Best with spicy patis mansi dip! Yum!

Kamias is a fruit which is green and rarely seen in the market. You may heard this fruit in other names such as belimbi or belimbi. The kamias is known to be a native plant from Malaysia and Indonesia. This fruit is in the same family with the star apple of balimbing. While the balimbing is star shaped, the kamias is a long oblong one.

Even though kamias is a little rare, I was privileged enough to have known kamias since I was a child. I didn’t even know it was rare! The kamias wasn’t really our tree, but our neighbor’s. Me and my playmates gather some kamias and play lutu-lutuan in our garage using my kitchen toy utensils.

The most amazing fact about this fruit is that it grows in the trunk of the tree instead of hanging from the stems like the other fruits. The kamias is hard and crunchy when raw but becomes soft when boiled. Make sure to dip them in salt if you plan to eat them raw because one bite of the kamias will truly give you a muka-sim!

Most of the kamias now comes as seasoning than being sold as fresh. They are also sold as dried. So if you see a kamias tree on your backyard, make sure to utilize it and make some sinigang na hipon sa kamias!

After consecutive weeks of buffets, chichirya, junk foods and fast foods, me and my family are now undergoing a self cleansing or detox from all of these salty foods. For the next few weeks, we plan to eat soupy dishes which are lightly seasoned or none at all. This was a challenge to me as the family’s cook but of course we can work this out.

When making sinigang, I use sinigang mix to instantly make the broth sour. Lucky me, our sinigang mixes has a lot of variations so I can just random pick a flavor and the sinigang is good to go. But since these pre-mixed sinigang mix has an insanely high levels of sodium, it’s a no no for our goals. So let’s go traditional and use fresh souring agents!

I was still a child when I started playing kamias fruits from our neigbhor’s tree but the good thing is that the tree is still alive! The tree was located at the back of our house where we play and I wasn’t really able to go there oftenly as soon as I stopped playing. Gathering the kamias fruits was a bit nostalgic for me!

Preparing sinigang has never been happier knowing that I used fresh ingredients and less sodium, and that the kamias tree is still alive!

If you wanna know how to make sinigang na hipon sa kamias at home, read and follow the quick and easy steps below. Happy cooking!

Sinigang na hipon sa kamias, and any other sinigang dishes is literally one of the easiest soupy dishes to make. For this recipe, we will be using natural souring agents, the kamias, instead of the sinigang mix.

Gather the fresh kamias from your backyard (or from your neigbhor’s tree). While both small and large kamias are already sour, the largest ones are the best to use for sinigang. Slice them into chunks and then boil. Doing this will release the natural sourness of the kamias into the liquid. After 5 minutes, the kamias will soften, making them easier to crush. Crush them gently to get the fullest flavor of the kamias. This liquid infused with kamias will serve as the sour sinigang broth. Add the tomatoes and onions to further add flavor in the broth.

Prepare the shrimps first before we add them in the broth. Shrimps have sungot which must be removed since it is sharp and can hurt. Also devein the shrimps beforehand. No need to remove the shells since they also add flavor to the dish.

Add the rest of the veggies into the broth and allow them to cook together. Just remember to put the leafy greens last since they are very quick to soften. The siling pansigang is not spicy when you add it whole, so if you want a spicy sinigang, chop the green chilies or add some red chilies.

I usually enjoy my sinigang na hipon sa kamias as a soup or with hot steaming rice and spicy patis mansi dip. You can also try this recipe with other meat like fish, pork and beef. Yum!