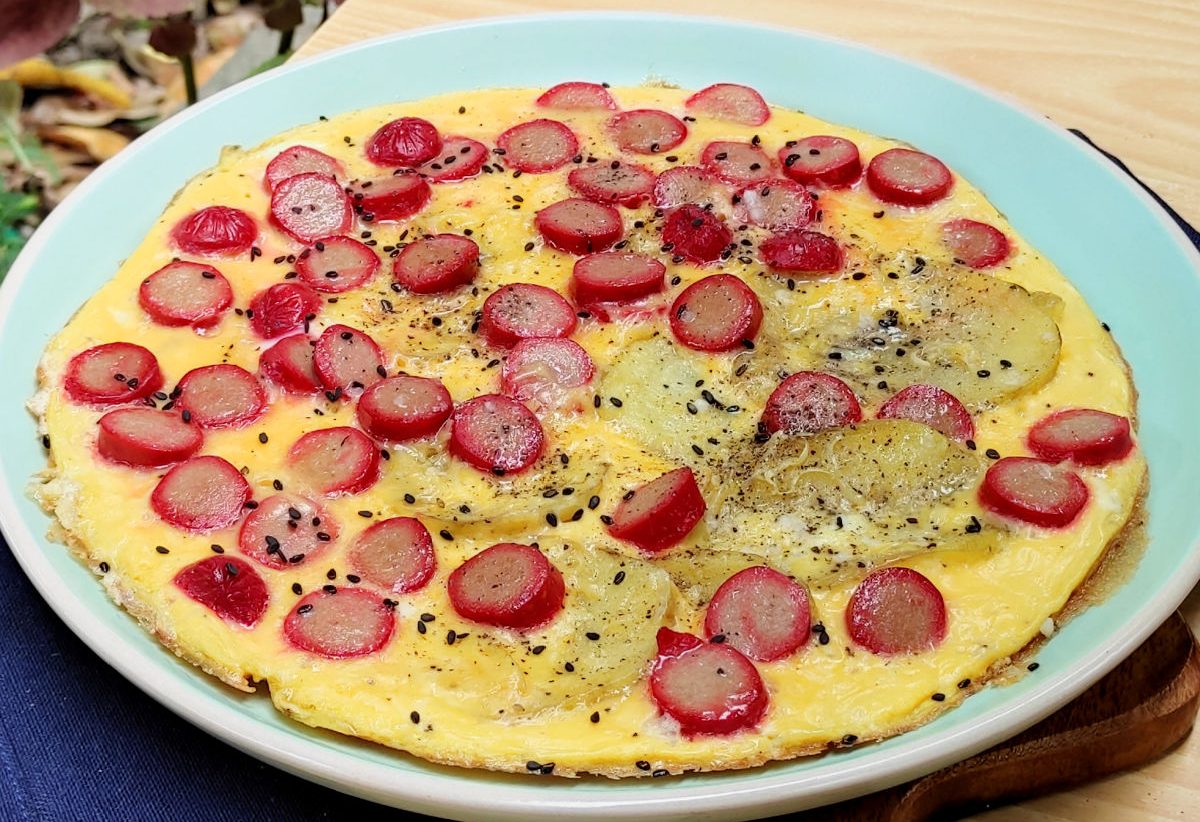 Potato Pancake is with Hotdogs is a scrumptious pizza-like pancake and made with thinly sliced potato, eggs, sliced hot dogs, grated cheese, sesame seeds. Sprinkled with some hotdogs and a lot of cheese, this pancake will truly serve as a great afternoon snack. Have your hot sauce prepared with this one! Yum!

This potato pancake with hotdogs is one of the recipes I invented because my baby niece wants some. She specifically requested “a pizza with potato instead of bread”. And since I have potatoes in the pantry, this little baby can have her request granted. This type of dish may sound weird at first but is really awesome once you’ve tried it out.

I have been using bread as an alternative to a lot of food but who would have thought that the alternative has an alternative too! Instead of making small oval pizzas, I decided to just fill a whole pan with sliced potatoes to serve as a base. Thinking of a binder, eggs would really do the work. This dish is a blank canvas in which you can add any ingredient you like. In this recipe, I used hotdogs to make this dish very kid-friendly since all kids love hotdogs!

If you wanna know how to make a potato pancake with hotdog, continue reading and follow the simple steps below. Have fun cooking!

HOW TO COOK POTATO PANCAKE WITH HOTDOG

Preparing potato pancakes with hotdogs is actually much easier than making real pancakes. This dish is a hybrid of pancake and pizza which will surely make a nice meryenda in the afternoon.

Start with slicing and frying the hotdogs first. You can also add other types of cold cuts like bacon, salami and others.

Instead of bread, the potatoes will be the carbohydrates used for the base of the pancake. Slice them thinly (thin enough but do not use a peeler) and then fry them just until they become fork tender. When done, arrange them in the pan before pouring the egg. I suggest you pour the beaten eggs slowly to estimate how much you will add in the pan. The eggs must serve as a binder to the potatoes. Too much eggs will make it look like an omelette with potatoes.

Add the grated cheese and hotdogs. Similar to a pizza, this dish would be super yummy if you can add different types of cheeses, especially quickmelt cheese. But the regular cheese may already do. Cover the pan to let the grated cheese melt.

When done, slice the potato pancake like a pizza. I sprinkled some black sesame seeds for garnish. You can also add a few drops of hot sauce before consuming. Yum!