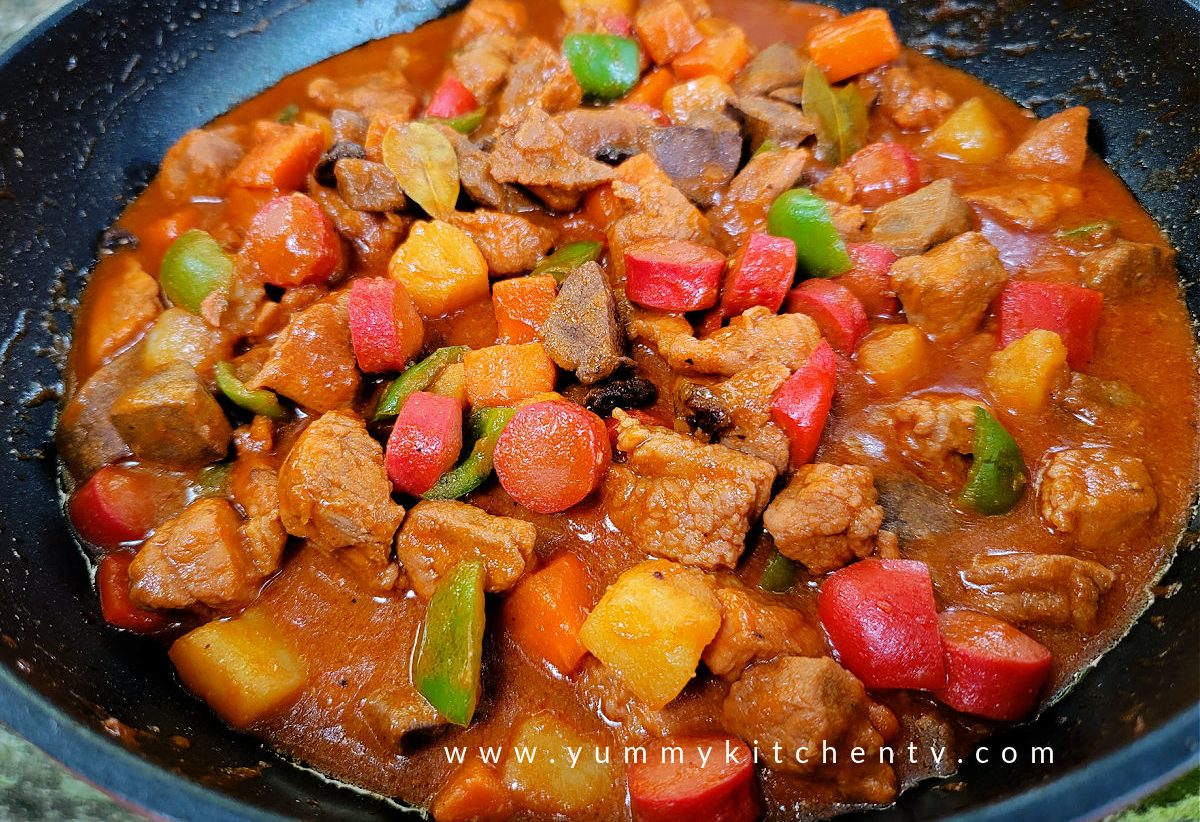 Pork menudo is a Filipino tomato based pork stew where pork pieces, pork liver, potatoes, bell peppers, hotdogs, carrots are stewed in a sauce made by tomato sauce, onion, garlic, bay leaves, pork cube, gratedd cheese, sugar, raisins, pepper and salt. This Pork menudo recipe will guide you to cook one of the best pork menudo you ever had. Pork menudo is best eaten with steamed rice! Try and make some today!

Pork menudo is one among the Pinoy classic ulams. When it comes to fiestas and celebrations, pork menudo is always present. Since the pandemic started and the gatherings are very very limited, pork menudo had also become a usual ulam for your family night.

What I love about pork menudo is that aside from the ingredients written below, you can literally add any ingredient you like. Pork menudo is like the salad among the meat dishes!! It contains a lot of flavors, colors and textures. Even the kids will surely love this!

HOW TO COOK PORK MENUDO

The steps in making a pork menudo are very simple and straightforward. Once the ingredients are prepared, the steps would be super easy. Lets start cooking to see the final look!

To start, stir fry the pork, pork liver, potatoes, carrots and hotdogs separately until all of them are light brown.  (Don’t forget to marinate the pork liver and the pork kasim). When all the ingredients are ready, we are going to cook them until they all come together to one flavorful dish. When all the veggies and hotdogs are stir fried, set them aside.

Start the dish base by sauteing the aromatics and then followed by the pork kasim. Add the tomato paste (you can also use 1 cup of tomato sauce. Pour some water and the pork broth cube. After some simmering time, add the veggies and then cook again until they are tender. Do the fork test to check the tenderness.

The last set of ingredients are totally optional. You can add green and red bell peppers and raisins (oh no). Once the dish really came together. Allow them to cook for a few minutes first before transferring to a serving dish. Enjoy!