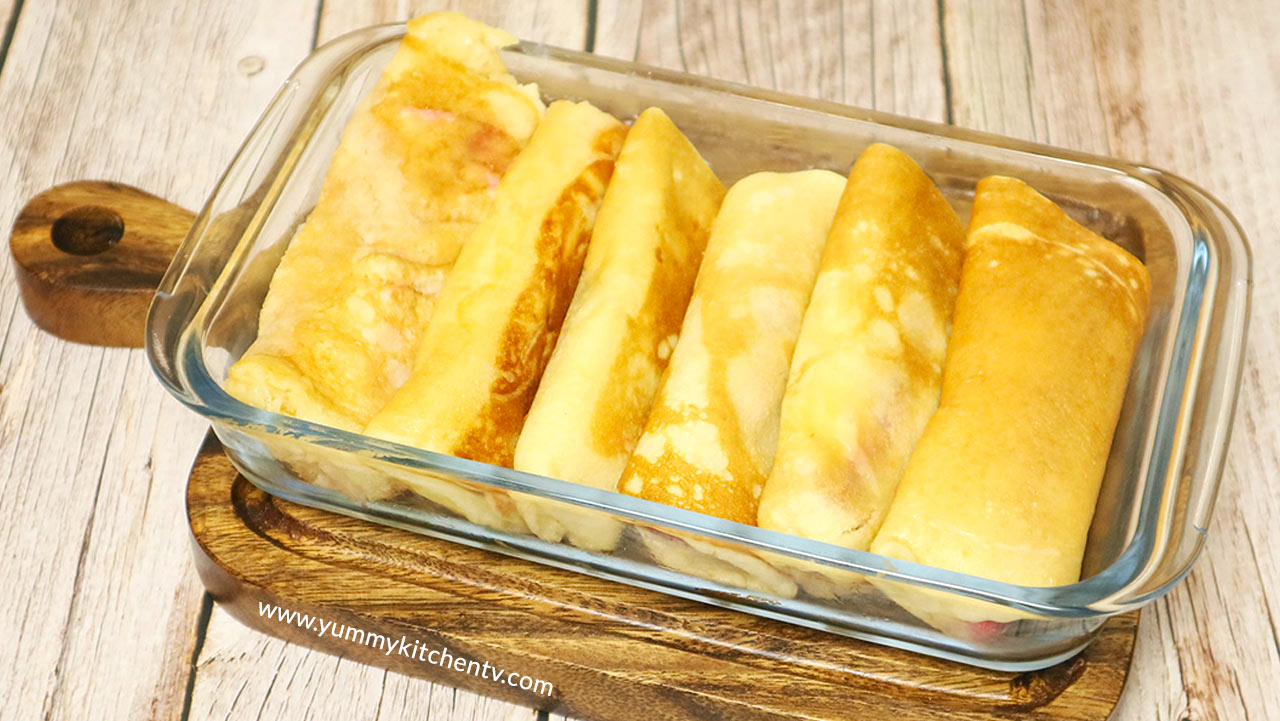 The perfect homemade waffles are crispy and perfectly brown with a yellow tint on the outside, and soft and fluffy with a meaty cheesy surprise in the inside. There’s no need for a waffle maker here! enjoy you Pan Waffles with just a few ingredient with minimal preparations needed. This recipe will be your new favorite sweet treat!

A brief history on the Waffle

The Waffle is a dish made from leavened dough or batter cooked between two rounded or squared shaped plates or waffle iron, with a honeycomb like pattern.

It was in the medieval times then the Greeks cooked flat cake between metal plates called obelios. The technique and recipe was spread throughout medieval Europe. The batter or cake mix was made with a simple mix of ingredients; eggs, flour, and water or milk, they were known as wafers and were cooked in between iron plates with long handles in an open fire. The term ‘waffles’ appears in the English language in around the 1725. Taken from the Dutch word ‘wafel’ from the Middle Dutch ‘wafele’. While the Middle Dutch was to be believed to have created the snack in the end of the 13thcentury, it was preceded by the French walfre. In the late 14thcentury the first known waffle recipe was created and penned in an anonymous manuscript entitled ‘Le Ménagier de Paris’ by a husband who had a set of instructions for his wife. And in the 15thcentury the waffle iron which were made with using an oublie was slowly getting to its more distinct pattern. A new shape of irons were being produced, many being rectangular in shape and the grid pattern was starting to get more noticeable. The long history of the waffle, it’s story of how it turned into the appearance we all know symbolizes the treat, and the story of the waffle iron or waffle maker can come down to the innovative idea of evolution and people’s desire to break new ground but still retain some sort of history. The 18thand 19thcentury waffle recipe varieties can still be found around North Europe where they were first created.

Waffles have an unlimited option of flavors, different textures around the world made popular due to trends like the classic Belgian waffle, a simplified version of the Brussels waffle with baking soda and yeast, Eggo styled waffles a popular American precooked frozen waffle that just needs a few minutes in the toaster or oven, or Mochi waffles made with sweet rice flour that creates a chewy inner texture, and cornstarch for that crisp outer center. With other waffle varieties like the Brussels waffles, Liège waffle, American waffles, and a lot more, all loved by the masses. Waffles have a number of sizes that come in forms like round, rectangles, square and even seasonal looking shapes like hearts, from plain, to spicy by adding herbs and jalapeno perfect with a side of pizza sauce or cheese dip. To a cheesy savory batter by adding cheddar or a similar sharp tasting cheese with seasoning and chives that adds to the presentation, to sweetened waffles flavored with chocolate, matcha or green tea, and so many more! Toppings included can doffer from fruits, chocolate or hazelnut spread, butter, honey, maple syrup, to any flavor of ice cream. Waffles are just the perfect homey snack for breakfast, brunch time option by adding some eggs, savory sauce, and bacon or sausages or the popular chicken and waffles combo, to a snack time dessert to indulge in after a whole day of school, a hard day’s work, or just something sinfully good to spoil yourself with! Waffles are just so fun with endless options to suit everyone’s taste.

Enjoy every bite of these light crispy waffles! Slather on some condiments like ketchup or a drizzle of honey or maple syrup for that sweet and savory bite! Pan Waffles are just that easy fun homemade dish cant help but crave for, especially on a sunny morning!

A perfect sweet and savory combo for that’ll wake you up in mornings!

While pan waffles aren’t your usual take on waffle, this hybrid of a pancake and waffle is a great way to create a no grid waffle without breaking the bank. Mix them up by adding different fillings like a savory sweet jam, peanut butter, mix of different cheeses, chocolate, and other fun surprises. You can even add flavorings on the pancake itself to make it even better, make them into chocolate pancakes using chocolate syrup or powder and roll a nice piece of chocolate bar in the middle. Let your imaginations run wild and just have fun!