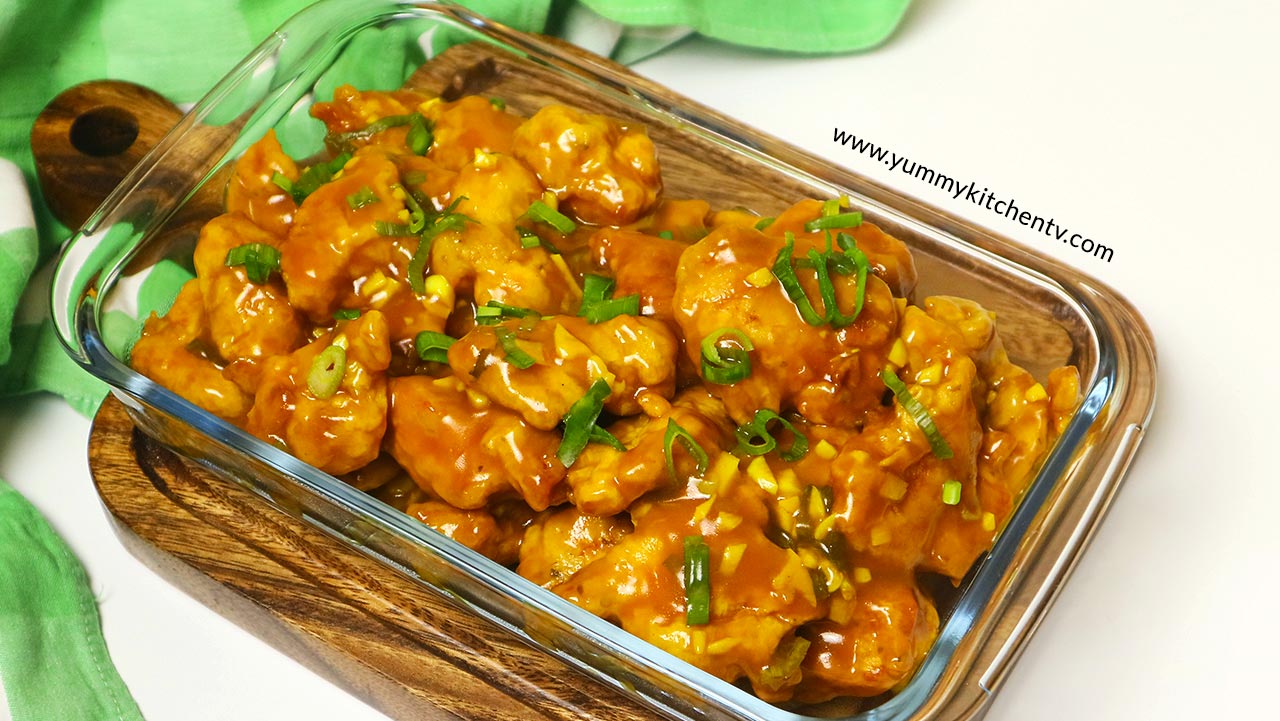 Orange Chicken is a made by frying chicken marinated with a batter made of egg, flour, corn starch, salt, pepper and oregano, and this fried chicken is sautéed in a sauce made with soy sauce, orange juice, garlic, corn starch and sugar. A surprisingly easy dish to make this may be your new family favourite meal!

Where did the idea really come from?

Orange Chicken a Chinese-American fusion dish with Hunanese origin. There are a variety of Orang chicken recipes in North Amercan Chinese restaurants, with different chicken batters and pieces fried, different mixes of caramelized sauces, and presentations, and names from plain Orang chicken, orange peel chicken, tangerine chicken and even orange-flavored chicken, to General Tso’s chicken popular in United States. Chef Andy Kao who claims to have developed the original Chinese orange chicken to the popularized orange chicken with American roots we have now in 1987, Hawaii at a Panda Express. While this Orang chicken can be found almost in every Chinese restaurant in America, this is rarely found in restaurants in China. the owner and founder of Panda Express, Andrew Cherng, explained that the orang chicken was a variation of General Tso’s Chicken, which is a dish unknown to China. Both General Tso’s chicken and the Orange Chicken are a ‘mutation’ of the sweet and sour based dishes found in China.

This dish may perhaps be from the ‘tangerine chicken’ found in China’s Hunan province. The taste is a bit different from the orang chicken we know due to American influence in their cuisine. The Chinese version was made using tangerine used in traditional Chinese medicine, they have a fresh and spicy taste. This version was created for the subtropical climate that has mild winters in Hunan province, making it ideal to grow tangerines, oranges, and lemons native to Asia. While the orange chicken has a sweet and sour flavor, is cooked with batter to make it crisp, and added sweetness to suit American tastes.

How the Orange Chicken rose to fame

A signature dish founded by and credited to Panda Express a popular Chinese-American fast food chain. They sell around 100 million pounds of the chicken dish a year. This version of the orange chicken became so popular worldwide eve to countries that have yet to have the fast food chain arrive in, that it spawned many copycat recipes and their own version of orange chicken to try at home. The Orange chicken dish is so popular that it was served in school cafeterias and even in military bases, and found in the frozen meal aisle in groceries in the United States.

The recipe below is a play on the Orange chicken made easier by cleaning and preparing the chicken tendons or your choice of chicken cuts, using the breast may make it dry easier, so its recommended to use chicken tendons or thighs, or even substitute these with wings. Coated in a batter of flour and cornstarch, mixed with a beaten egg, seasonings like salt, pepper, and oregano, with a bit of water to glue them all together. Fried till all the sides has turned a nice golden brown. Coated and simmered with a sauce made of soy sauce, water, vinegar for an extra tang, orange juice our main flavoring, garlic, brown sugar, diluted cornstarch, mixed till it turns thick and ready to cling on the fried chicken. After tossing the fried chicken bits and have now been colored with the orangey sweet sauce, sprinkle some green onions for some extra color. Serve fresh out of the pan with a steaming bowl of white rice.

This dish has been a weekend favorite and a staple to many Chinese American households. This might even be your new go to dish when you want to whip up something crispy and sweet but suits rice just fine.

While you can make this Orange Chicken dish with chicken wings or replace the orange with a lemon. The orange chicken is such an iconic dish that you cant help but get interested in. best served with plain white rice, or freshly made chow mien for that little level up in your office of school lunches. A golden crispy on the outside tender on the inside chicken chunks made even more vibrant with a sweet glimmering vivid orange sauce, and a handful of spring onions for contrast.