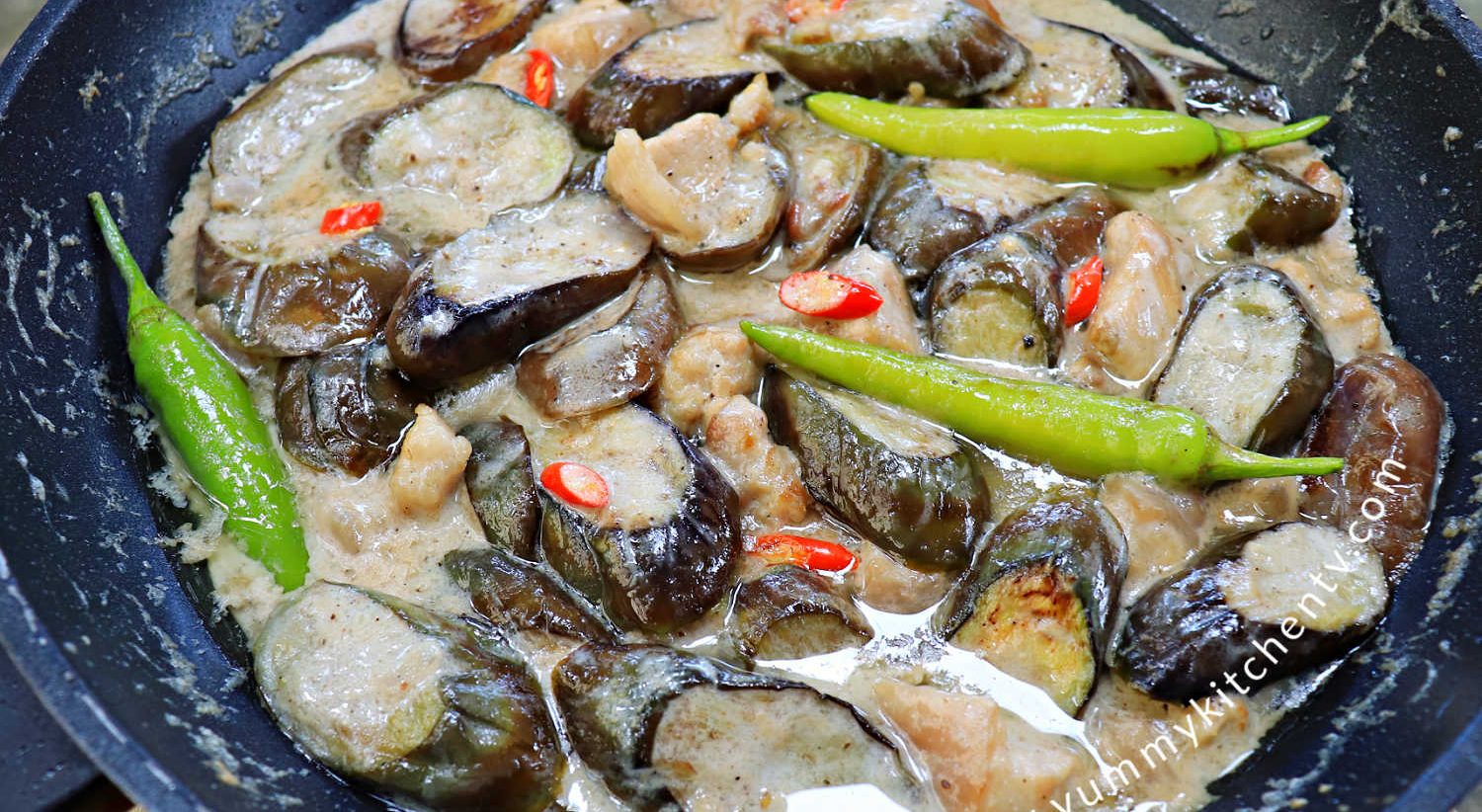 Having a supply of eggplant but don’t know where to use it for? Give the ginataang talong a try! This dish a very healthy ulam made with eggplant swimming in a savoury sauce made with coconut milk, pork and chilies. It is so tasty and creamy even the pickiest kids will like it!

It was my harvest season and I was excited to gather the fruit of my gardening. I gave all my love and effort to it since I really wanted to grow some vegetables. I had tried planting a lot of vegetables since I was kid but it is just now that my seeds had actually grown. It is really my plan to have a sustainable garden which will be very useful since I make a lot of cooking vlogs.

One of the vegetables I harvested was eggplants. Given that it was the first time I was able to harvest my own eggplants, I am amazed on how many pieces I was able to harvest. So now I have a lot of eggplants sitting in my pantry. I guess I’ll be enjoying a lot of eggplant dishes for the next few days. Eggplants are one of the most flexible food items which can be used in a wide array of dishes. But it is important to use the eggplants right away because they can easily decay when not stored properly.

Ginataan is a popular cooking method used in an array of food items like pork, chicken, fish and even in vegetables. The word “ginataan” comes from the root word “gata” which is the Tagalog word for coconut milk. Ginataang Talong is one of the most popular and easiest dish you can make using the ginataan method.

Ginataan is literally one of my favorite dishes. So far I have tried using different meats and protein sources for the ginataan. One of my favorite ones is the ginataang tilapia with eggplant and sitaw. But since I have an abundant stock of eggplants, and coincidentally one my kapitbahays send me some fresh coconut, the first dish which comes into my mind is the ginataang talong. Another fun thing in this dish is extracting the gata on my own.

Ginataang talong is one of my favorite eggplant dishes. It is simple and light not just in the heart but also with the budget. The soft eggplant braised in the creamy and savoury coconut curry sauce is truly addicting! It is best eaten using bare hands in a boodle fight. Make some ginataang talong today!

HOW TO COOK GINATAANG TALONG

As simple as it looks, the ginataang talong is truly easy to prepare. Start by preparing the eggplant. Wash them and remove the stalk. I cut them diagonally for a fancier look. The eggplant will soften as it cooks later and cutting it this way will let the eggplant cling to the skin instead of being mushed throughout the process. Wash and drain the eggplant pieces. Shallow-fry the eggplant pieces and set them aside.

The next thing to prepare is the creamy coconut sauce. Render some fat from the pork belly and then saute the aromatics in the oil. Add the coconut milk and let the pork flavors infuse into the creamy sauce. It is important to remember not to cover the pan to prevent the coconut milk from curdling. If you want a meatless dish, you can simply omit the pork and use regular cooking oil. Add the eggplant back to the pan and let it braise into the coconut sauce. If you want some kick, you can add some red and green chilies. When the sauce has been reduced, the ginataang talong is ready. Grab a big bowl of hot steaming rice and attack while it is still hot!

You can actually use this recipe as a baseline if you want to try other ginataan dishes with eggplant. Add a fried fish and it is instantly ginatang fish with talong! Have fun!