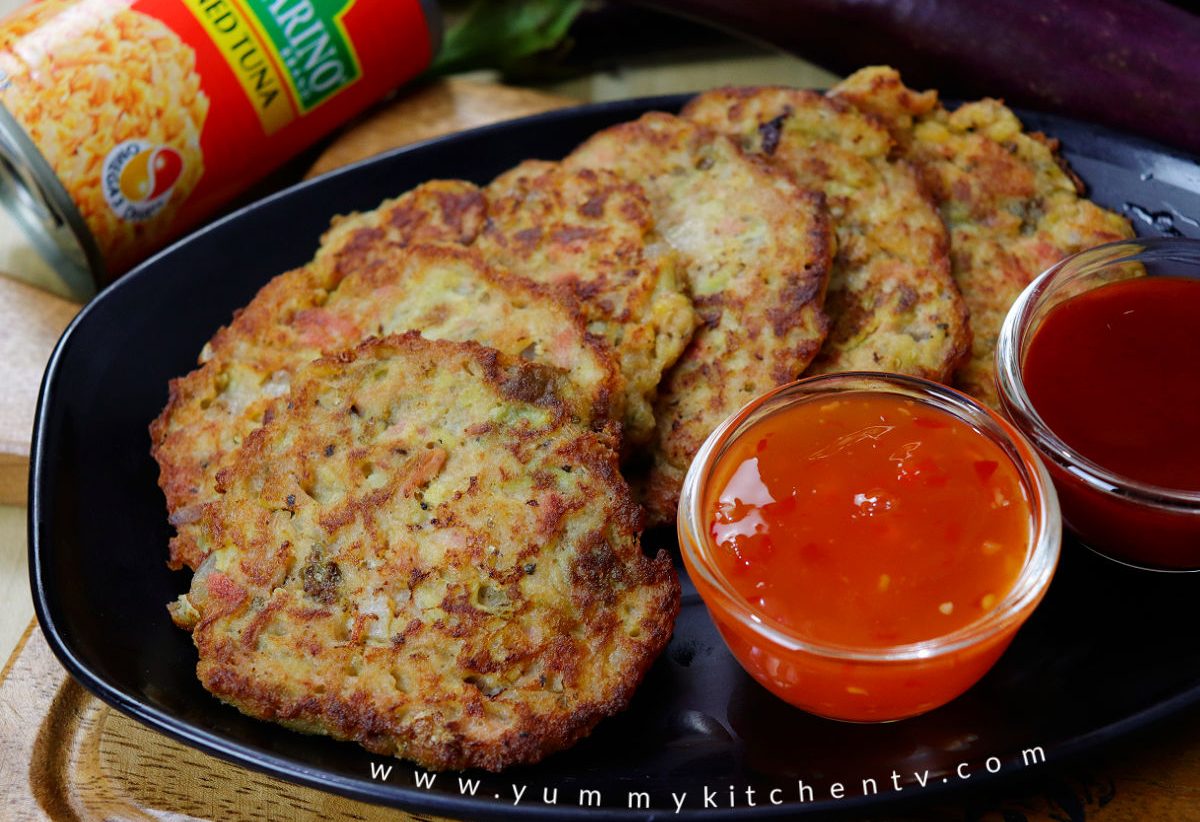 Healthy patties made by the land and the sea! If you want to make your burger patties healthier or want to explore new eggplant dishes, this eggplant tuna patty recipe is definitely the one for you! These patties are full-packed with vitamins and minerals from eggplant and tuna.

A BITE OF THE HAMBURGER HISTORY

Burgers are one of the best foods in the world. It can vary in a lot of ways. The buns can be round of long like the subway sandwich, the meat can be made of beef, pork, chicken or even plant-based, usual fillings can include mayonnaise, mustard, lettuce, tomato, cole slaw, cheese and even pineapples!

Hamburgers, or burgers, are usually associated with a place in Germany–Hamburg. It was believed that when German immigrants went to America, they brought their original Hamburg steak which were sold in food carts during the Industrial Revolution. Because of the difficulty of eating the steaks while standing, one of the cooks decided to place the hamburg steak between two pieces of bread. And that’s how the Hamburg sandwich, now called hamburgers are born.

Patties highlights a burger or a sandwich. Just like in the history, the hamburg steak is what makes the hamburger standout. No matter how lovely the other ingredients in a burger is, having a top quality patty will make it extraordinary.

As of today, there are a lot of patty varieties being discovered. Whether meat-based, plant-based, or a combination of both, these patties are competing to be the best.

Eggplant tuna patties is my entry to this informal patty competition. This patty is a combination of meat and plant-based ingredients.

Eggplant and corned tuna are two of the main ingredients in this dish. Eggplant is a vegetable which is soft and slightly bland which is rich in nutrients while being low in calories. Canned corned tuna is an economical substitute to the real tuna while still having its basic nutrients too. These two ingredients provides a good combination when it comes to taste and texture.

Eggplant tuna patties is my niece’s favorite snack. While the oldies use these patties in between loaf breads, I specifically make small patties for my niece, just how she requested. It’s really funny how my non-vegetable eating oldies out there didn’t know that they’re eating eggplant. What I love about these patties is that they don’t taste too oily or too meaty, which can cause early satiation or what we know as “madaling masuya”. Just like what my niece said, “It doesn’t really feel like eating vegetable.”

If you have a child who is a picky eater, I recommend for you to try this dish out. You can vary the meat added but with eggplant as the main ingredient, this dish will still turn out healthier than you think. Give them a dip made with ketchup + mayo and they will surely love it!

HOW TO MAKE EGGPLANT TUNA PATTIES

If you have prepared any patties from my previous recipes, this recipe will almost be similar to them, but with a few extra steps.

First, prepare the eggplants. You can do this by either grilling or boiling them to remove the skin. I personally prefer grilling them to give the flesh a smokey flavor. Remove the skin is way easier while it is still hot than when warm. Dip your fingers in water from time to time to bear the heat.

When the eggplant is done, the next steps will be similar to making any other patties. Make sure that all patty ingredients are minced or chopped enough for them to come together easier. Instead of canned tuna, you can use any fried fish you have at home. Or even ground meat! Fry the patties until crispy and golden brown.

If you made small patties, this dish is best eaten as a snack or paired with hot steaming rice. If you made medium patties, this is best used as a sandwich or burger patty. Grab your favorite dip and enjoy! You’ll be loving this so much!