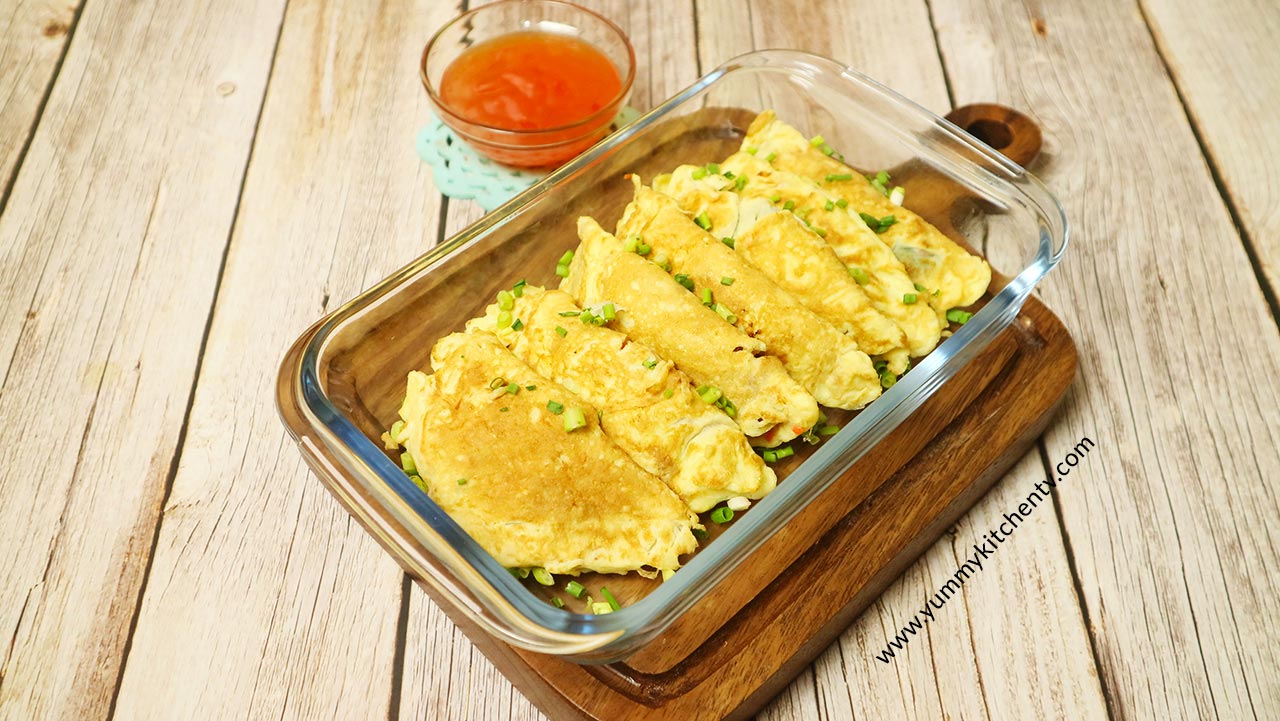 What are Egg Dumplings?

Egg dumplings or ‘Dan Jiao’ are typically Taiwanese in origin and are eaten in the Chinese New Year as a symbol of prosperity. Is described as a savory egg wrapped meat filled dumpling, eaten as is or added into the hot pot with some shredded napa cabbage, bamboo shoots, shiitake mushrooms and cellophane noodles. The egg dumpling eaten on the new years are associated with gold nuggets of old China and are a symbolic food that not only eaten to be prosperous in the Ney Year, its also a dish important to many immigrants as this is one of the dishes Chinese immigrants carried from the United States. While these may seem labor intensive its actually simple, expecially if you follow the instructions below, we’re sure you’ll be able to make these egg dumplings in no time.

A detailed way to make these delicious eggy goodness?

The key to making these simple breakfast version of the egg dumpling, simply prepare the fillings first, by sautéing the garlic and onions, making sure the onions are now translucent and soft, adding the chicken to cook till its changes in color, you can also ad a pinch or two of salt and pepper to add more flavor, drizzle some fish sauce for that tang, this also helps remove any bad smells the chicken may have. then add some water and simmer all these for a few minutes. Mix in some carrots for some color and extra sweetness, soy sauce for saltiness, some oyster sauce to add to the savori-ness, and malunggay leaves to help sip all those sauces, has a multitude of health benefits, and add to the color once you take a bite. Set the filling aside to cool. It would be best to make sure that the meat isn’t too wet or separate the sauce from the fillings to make it easier to add into the egg dumpling wrappers later on. To make the egg dumpling wrappers mix together some eggs, add a pinch of salt and pepper, and the cornstarch slurry made of one part cornstarch and around 2 parts water. This is needed to act as a binder and make the eggs thick and crispy. It help keep the eggs from easily breaking apart especially when you try to fold this to cover the fillings later on. To prepare this, prepare pan at medium heat or low to medium heat, its best to pour in 1/3 or ½ of the egg mixture one by one in the pan to make sure it wont stick together with other egg wrappers or it might be too much to fill each dumpling and fold them without being burnt. When pouring the egg batter into the pan, try to pour it slowly in one place to make it circular, you can also use a egg shaper or try to from them into a circle by using a spatula to avoid the egg mixture from just scattering all around. Once the shape is formed, place one side with a tablespoon or less of the filling, carefully fold the other side of the egg dumpling to cover the filling, pressing the tips down to seal them. you can also pour a little of the egg mixture on the ends to completely seal the dumplings if needed. Flip it on each side once it turns a bit crisp or has browned. Repeat till all the egg batter is done. Serve this with a garnish of green onions and a side of sweet and sour sauce.

Tender, delicious and filled with veggies especially hidden for kiddos who hate the sight of them. This will sure filly you up, can work as a side dish or appetizer. Give this delicious delicacy a go and find yourself happily munching on these golden nuggets in the morning!

A delicious remake on the usual dumplings with a breakfast twist

Perfect for those days of monotony in the mornings, a perfect surprise, and you can fill these dumplings not only with meat but also other surprises like cheeses. Also great to add in the broth for cold weather days when you don’t know what to add. Making this vegetarian friendly dish is to add into your meal plan is also helpful, just change out the fillings to your desired choice of vegetables. Just a few bites of this you’ll be shocked to see you’ve already had your fill of almost half of the dumplings. It’s that delicious and nicely presented that you’d be happy to know you’ve made it yourself.