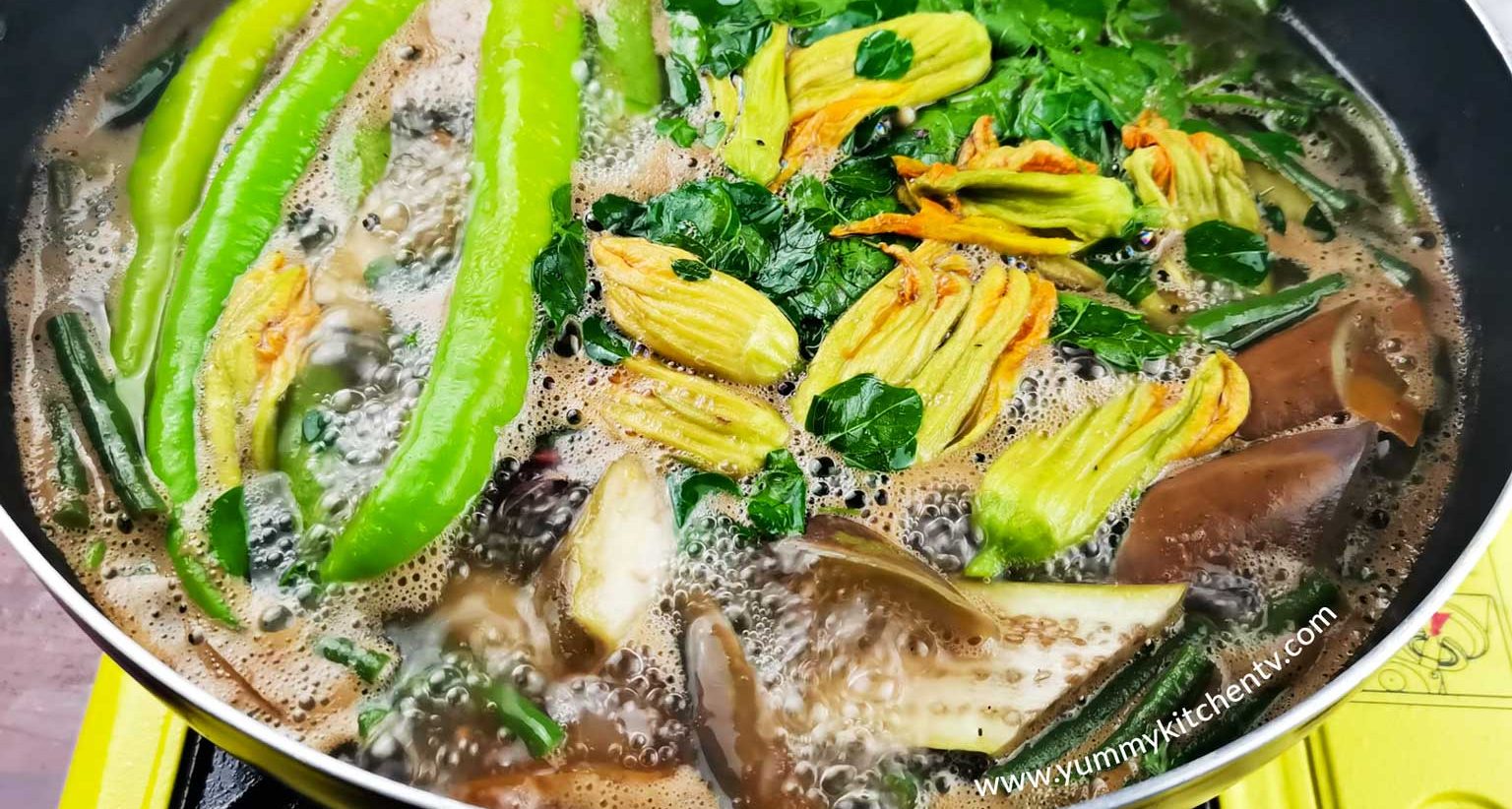 Dinengdeng with Fried Tilapia is made by simmering fried Tilapia, squash, eggplants and other vegitables in a sauce made with fish sauce, onion, water, pepper and green chili. Dinengdeng or inabraw is a tasty Filipino veggie dish stewed in bagoong, with different vegetables that are widely available, and is a delicacy of Ilocos and surrounting region in the Philippines.

Dinengeng also called ‘abraw’ or inabraw’ is a dish originating from Ilocos region. Make with a medley of vegetables cooked in a creamy fish paste which has a intense flavor, or shrimp paste which has a softer flavor, these paste flavored bases, simmered with vegetables are then readied t be combined with the grilled or fried fish and sometimes even by as a standalone vegetable dish or with bits of pork or beef to help accent the flavor. This dish traces back to the pre-colonial period where the common methods of cooking were roasting, boiling, and grilling. Dinengdeng was a dish even Gabriela Silang a famous Filipino Heroine said to have cooked well. The story as told was that Gabriela Silang was traveling to meet her friends to share the dinengdeng she made and came across an old man. He was shivering in the cold and she gave him her shawl and the freshly cooked dinengdeng. It was said to have been composed of kamote or sweet potatoes, saluyot leaves or jute leaves, katuray flowers or corkwood tree flowers, malunggay leaves, halaan or clams, and ampalaya leaves or bitter gourd leaves. The dinengdeng we commonly find now are usually a mix of leftover fish like tilapia, bangus or milkfish, or galunggong or roundscad. The vegetables added have also been changed or replaced to easier found veggies such as eggplant, okra, squash string beans, and tomatoes.

What is a Tilapia?

A tilapia is a common name given to a hundred species of cichlid fish. This freshwater fish mainly inhabits shallow stream, rivers, ponds, streams, and lakes, rarely in any brackish water. They were historically important in Africa’s artisanal fishing, and is even increasingly important in aquaculture and aquaponics. These are popular for their inexpensive price, mild taste, and easy recipes of preparation, that in 2002 it was held the 4thmost consumed fish in the United States.

The Tilapia goes back a few centuries ago in Ancient Egypt with the Tilapia being a symbol of rebirth in Egyptian art is painted in tomb walls. Tilapia is also one of the 3 main types of fishes caught from the Sea of Galilee in Talmudic times. Its sometimes called by the name “St. Peter’s fish” from the story of the Gospel of Matthew, telling that the apostle Peter caught a fish that carried a coin in it’s mouth, though the passage did not name the fish. Many more stories have been told with the fish being one of the characters out of many or is replaced into the story as a ‘fish’ to create an image. The term ‘tilapia’ is from the latinization of ‘tihapi’, which was named by Andre Smith, a zoologist in 1840.

As a dish tilapia is sold as a whole fish, skinless, fillet, and boneless. This is a also a choice fish for some because of it’s low levels of mercury, and has a primarily vegetarian diet, these are also fast growing and short lived. They have low calories, saturated fat, carbohydrates, and sodium the fish being a good source of protein.

A delicious way to enjoy Tilapia, this healthy flavorsome vegetable stew or Dinengdeng with Fried Tilapia, just warms you up as well as fill you with scoops of health benefits. You just have to try.

A Filipino soup dish with an array of vegetables. Prepared by boiling a pot of water, seasoned with bagoong fish or shrimp sauce, a toss of some vegetables, simmered to be followed by a grilled or crispy fried Tilapia. What could be more tasty and healthy than this? A simple dish made with simple ingredients, easily made by just a method of cooking, and can be done is just one pot. all makes up to create a wonderfully filling and appetizing dish that kids and adults will surely like!