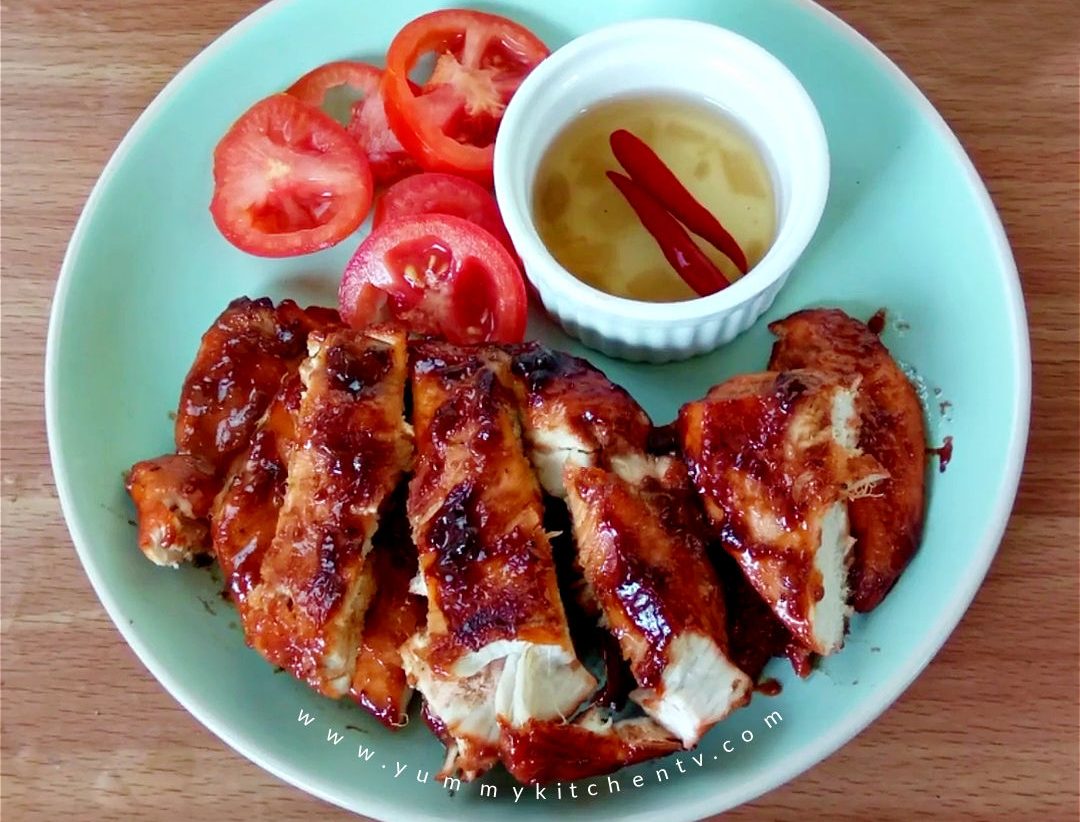 Have your favorite tocino light on the heart and soul. Chicken tocino is a modified version of the classic pork tocino and is cured in an all-natural sweet and fruity marinade resulting to a sweet, tangy and smokey taste. Serve it with garlic fried rice and chopped tomatoes on the side for the best tocilog breakfast! Find true love with chicken tocino!

If I can’t think of a good breakfast, I usually resort to buying pre-packed ulam from our next-door sari-sari store. One that never fails me is tocino. It is sweet, smokey and simply savoury. I really like it as a tocilog set (tocino-sinangag-itlog). But by just looking at the nutrition facts, the sodium content were just totally “kaloka”.

Before the pandemic, I have visited one of my friends from Pampanga who shared an amazing tocino recipe. Since then, I started curing my own pork tocino at home. One good thing on making food at home is that you can control the salt and other ingredients you put in it.

The word “tocino” actually means “pork belly”. But in the Philippines, the term tocino is more like a specific way of preserving meat in a set of spices to produce a perfectly sweet and garlicky flavor. The sweetness of this dish made it one of my favorites when I was a child.

Chicken is truly a great meat option if we want to make our meat dishes healthier. When I started becoming health conscious, I tried replacing most of the pork and beef dishes into chicken. So for this blog, I’m gonna share with you my chicken tocino recipe which I learned from my Kapampangan friend. I only modified a bit on the amounts to specifically soothe my taste.

Chicken tocino not just makes a good breakfast but an all-day meal. Pre-pandemic, it is one of the most considered baon for most kids and professionals. But since now that everything is home-based, the stove is closer and so does the chicken tocino.

HOW TO MAKE CHICKEN TOCINO

As mentioned, making a tocino involve curing or marinating the meat. Unlike the usual umami marinade made of soy sauce and vinegar, the tocino marinade and includes pineapple juice, banana ketchup, brown sugar, salt and pepper. The pineapple juice is essential for a tangy taste and the red color is contributed mostly by the banana ketchup.

In this recipe, I used chicken breast as the meat cut. It is a blank canvass and is a good choice for marinated type of meats. I also recommend using boneless leg or thigh meat for a more juicy and tender chicken tocino.

After marinating, simply arrange the marinated chicken in a pan and let it cook on its marinade until it dries up. Adding little water also helps in tenderizing the meat. Unlike the pork tocino which produces its own oil, the chicken tocino doesn’t. Simply add a little bit of oil to help it fry itself. The chicken tocino is ready one the crust has caramelized.

Serve it with some garlic fried rice and chopped tomatoes or atsara on the side. Best tocilog ever!

If you want to make large batches for personal or for business, you can keep the raw chicken tocino in resealable bags and freeze up to 2 months.