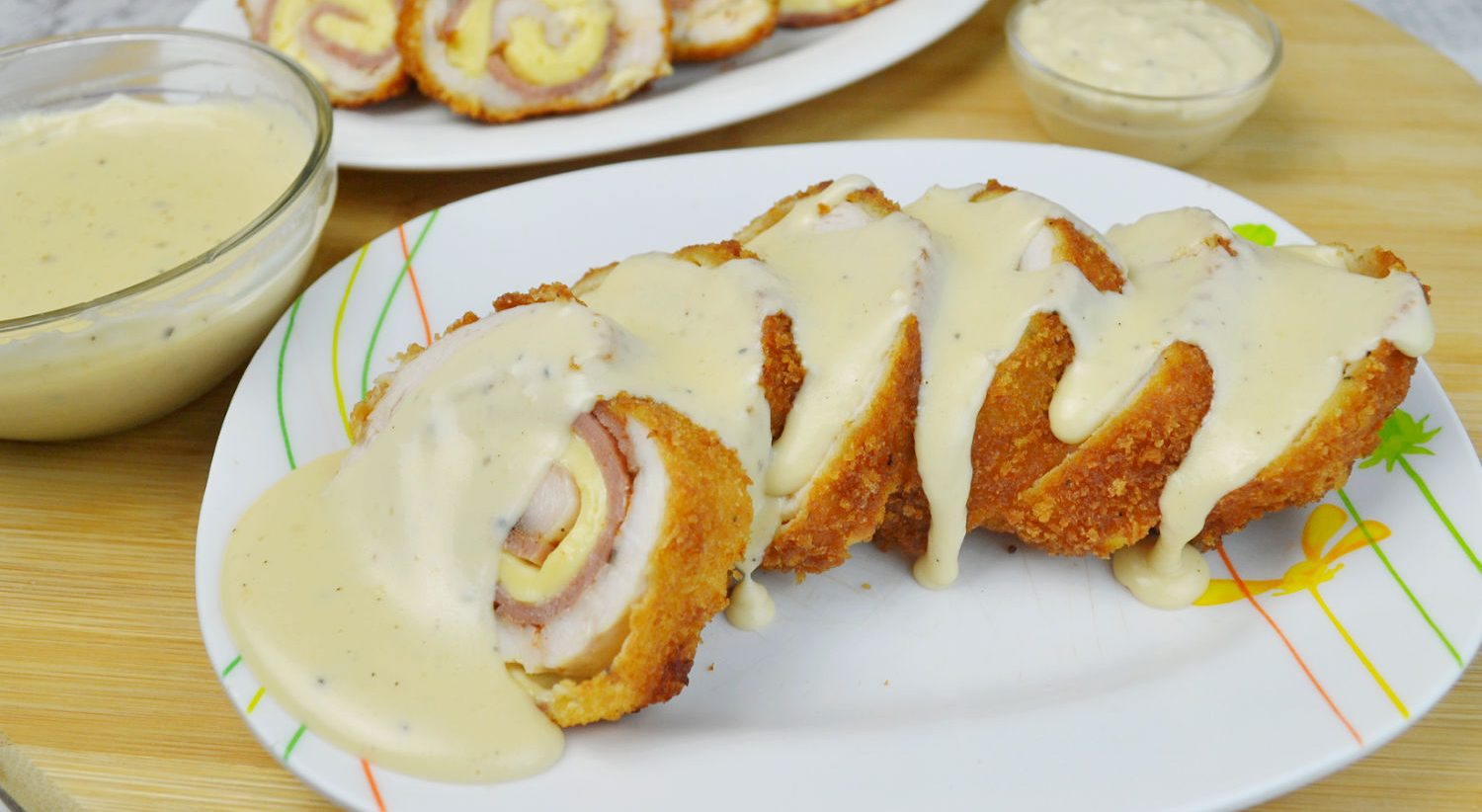 By YUMMYKITCHENPosted on November 3, 2020October 4, 2022
Jump to RecipePrint Recipe

Chicken cordon bleu is a deep fried roll filled with ham and cheese rolled with flattened and seasoned chicken breast with salt, pepper, garlic, paprika. The juiciness of the chicken, added with the sweetness of the ham and the creaminess of the cheese makes this dish melt in your mouth and is really popular all over the world. Chicken cordon bleu is adapted from the French cuisine wherein ham and Swiss cheese is wrapped in chicken meat and is made into a roll and was deep fried. The version of this is the same except that we used locally available cheese. It is served with creamy white sauce on top and is commonly enjoyed with rice.

Chicken cordon bleu is always present during birthday celebrations, family reunions, debut parties and many more events. And once cordon bleu was served, the people are always eager to get one. This was one of the dishes which got fully consumed during receptions.

I first knew about chicken cordon bleu when I saw my mom and my auntie prepare and cook it years ago. They would not allow me to help because I was still a child. During that time, cordon bleu was a trend, the recipe is all over the internet and everyone wants to try it at home.

Because the making of the cordon bleu became a hassle for my mom and my auntie, this became the first and last time we made cordon bleu at home. Whenever we crave for cordon blue, we buy a ready-to-eat one from eateries and restaurants.

Cordon bleu became a hit to online food sellers since people do not want to prepare food before the pandemic started. The sellers put a high mark-up price since the labor of making cordon bleu was a bit hard and make take you time to prepare. But this recipe will make you realized that cordon bleu was a really easy dish to make, as soon as you follow this recipe and follow our tips and recommendations. In this way you can eat your favorite cordon bleu at home, without paying large sum of money.

HOW TO MAKE CHICKEN CORDON BLEU WITH WHITE SAUCE

Place the chicken breast in a plastic wrap and fold to wrap the breast. The outer layer of a chicken cordon bleu must be really thin to be able to wrap the other ingredients to be put inside without bursting or being too bulky. To achieve this, pound the chicken breast using a meat tenderizer hammer to flatten it as thin as possible. If a meat tenderizer hammer is not available in your home, you can use your regular hammer. Just be sure to sanitize your hammer before using and put some plastic to cover the tip of the hammer that will be used to ensure cleanliness.

Once the chicken breast is flattened, season it with your favourite seasonings. In this recipe, I used salt, ground black pepper, garlic powder and paprika powder.

For the next layer of the chicken cordon bleu, place the ham slices on top of the flattened chicken breast. You may use pre-cooked or uncooked ham since it will still be cooked later. For the last layer, place the cheese slices on top of the ham. You may use different types of cheese but in this recipe, I used cheddar cheese. If you want some stretch on your cordon bleu, add some mozzarella cheese slices.

It is more manageable when the pieces are all ready for frying. Heat some oil in a pan under low to medium heat for frying. Add a lot of oil enough to reach the half of a chicken cordon bleu when placed. Fry the chicken cordon bleu pieces in small batches, 5 to 7 minutes on each side. Instead of frying, you may opt to bake the cordon bleu at 200C for 25 minutes. Let the pieces sit in a tissue paper or in a strainer to drain the excess oil. Let it rest for 15 minutes before cutting.

HOW TO MAKE THE WHITE SAUCE

While waiting for your chicken cordon bleu to be fully ready for cutting and serving, prepare the white sauce. Basically, you need to make a roux. A roux is a mixture of oil and flour and is the base of almost all sauces. Heat a pan and add some butter to it. Add some flour, mix and allow to cook. The ratio of a roux must be 1:1. So if you put 1 teaspoon of butter, you need to add 1 teaspoon of flour on it.

Other substitutes for butter would be margarine or any other cooking oil. The making of the roux will just run for a few minutes. Do not cook the roux for too long or the flour will burn. When the roux is ready, add your evaporated milk small amount at a time and stir. Let it boil under low heat. Season with salt and ground black pepper and your white sauce is ready.

Cut your cordon bleu into serving pieces and drench with your white sauce. You may add some garnish like parsley or simply chopped green onions. Chicken cordon bleu may be enjoyed on its own but I really enjoy it with rice.

Watch how to cook Chicken Cordon Bleu with White Sauce