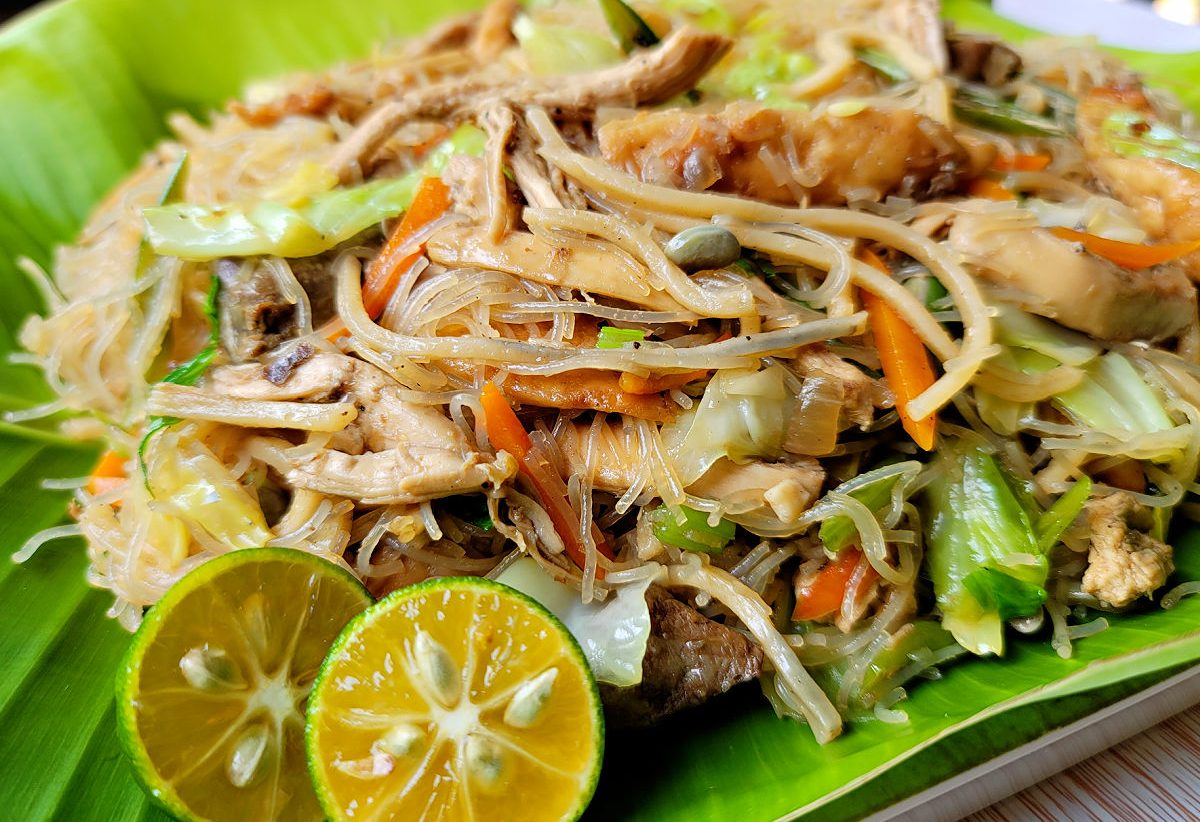 Bihon Canton Guisado is a Pinoy classic fiesta essential which gives a happy and longer life. Having bihon canton is like having a feast in a bowl. The noodles, veggie and meat ensemble together makes this one fulfilling dish.

Noodles are the staple food next to rice. We owe our noodle recipes from the Chinese cuisine. It was then localized into our own versions into what we know today. Noodle dishes have been an integral dish every Pinoy occasion.

We all know that noodles are a must-have every fiesta and celebration. Let’s make a quick recap on the Filipino noodles we usually enjoy. These noodles might have different sizes, textures and color but all of them are super fulfilling to eat.

The two noodles which will be used in this recipe is the bihon and canton.

“Celebrate with bihon canton guisado and have a happy and life.” That’s what my lola is always telling me everytime I cook for any family occassion. Forget all the other dishes but not the noodles.

Bihon came from the Spanish word “bijon”. They are made with very thin rice noodles which are marketed as rice vermicelli. When we say “pancit”, it is usually the bihon that is talked about.

A Pinoy’s celebration is not complete without the bihon canton. Many believed that it really lengthens our lives but of course, bihon canton is so delicious and fulfilling.

Bihon and canton are actually two noodles which are cooked together in this recipe. They can be prepared separately but are better when they come together. The difference in their textures plus the different meats and veggies in it made this dish a complete deal.

HOW TO MAKE BIHON CANTON GUISADO

If you were to make a peak on the recipe below, it might look like a lot list of steps. In reality, the only time-consuming phase in this recipe is chopping and preparing the ingredients but the rest will just be like a piece of cake.

As bihon canton is known to be full packed of vegetables, I highly suggest having someone help you in preparing them, especially if you’re going to make a large batch. You can use any vegetables that you like but the ones I used in this recipe are the most usual and economical ones.

Before you start chopping the vegetables, boil your chicken with bay leaves. Bony parts are the best chicken parts to use for this as they also give a nice chicken broth. By the time you are done preparing the veggies, your chicken will be ready also. Flake the chicken using your hands to separate the bones. Set them aside until use.

The next step is to do the meat and veggie mixture. Technically, the only thing you need to do is sauteing everything. But remember: there is a proper sequence of sauteing the ingredients for a guaranteed delicious meat and mixture.

Let’s start with the ingredient which doesn’t need aromatics. I used kikiam in this recipe but you can also add fishballs and squidballs (cut the squidballs in half). Fry the kikiam until partly-cooked. This will simply be added later.

Next, we will go to the actual meat and veggie mixture. Saute your aromatics, followed by the chicken liver and the flaked chicken. These two requires extra cooking time so we cook them first. Don’t forget to season them with soy sauce and oyster sauce (only put half of them).

Next, add the carrots and green beans. Make sure to remove the string on the side of the green beans. I forgot to do this once and my green beans ended up raw since water did not enter them. (HAHAHAHA). Carrot and green beans are tough vegetables which takes time to cook so we cook them first. Bell peppers and cabbage cooks fast so we add them last. When everything is cooked, add the fried kikiam and give it a quick stir.

The meat and veggie mixture is done so simply set them aside as we cook the noodles.

The next steps are better made in a large wok or talyasi. Grab the chicken broth from the boiled chicken earlier. For added flavor intensity, I added a shrimp broth cube. Further season the broth with the rest of the soy sauce and oyster sauce. Adjust the taste using salt or fish sauce. I added some sugar for extra linamnam.

Just wait until the broth is completely absorbed by the noodles. Add the meat and veggie mixture and simply combine them with the noodles. You will be needing two sandoks and a lot of arm strength to do this one.

The bihon canton is now done and ready to eat. Drizzle some freshly-squeezed calamansi and enjoy!