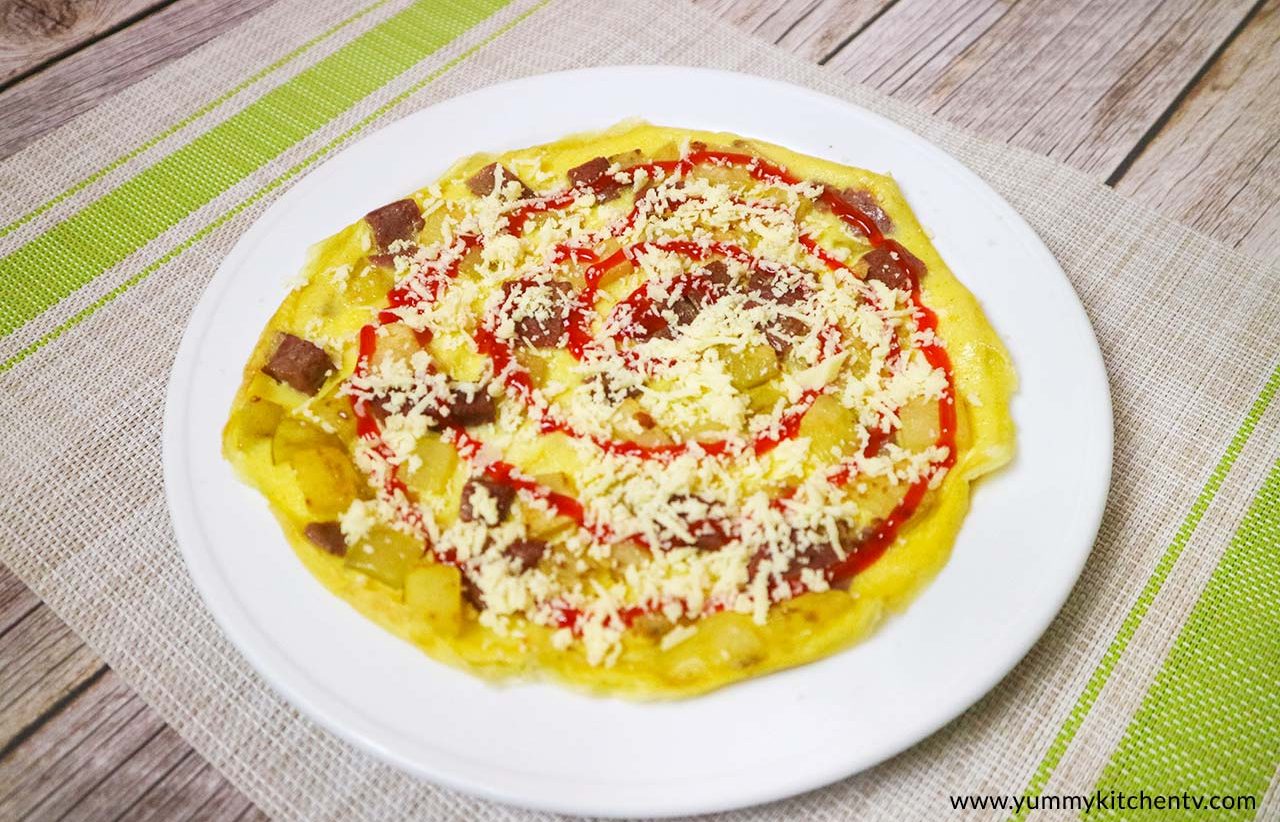 Potato omelet isn’t just a breakfast dish, it could be a snack, lunch, or even dinner dish that you can just upgrade with a few mix of additional ingredients, or keep it simple like the Potato Omelet recipe below. A humble dish but with simple ingredients and easy to do instructions, this dish just needs potatoes, eggs, some salt and pepper, your choice of meats, and some condiments like ketchup, mayonnaise, or even cheese to top it off. Great with a side of white rice, garlic fried rice, or some toasted or freshly made bread.

A brief History on the Omelet and why we love it

An Omelet or ‘Omelette’ is a dish commonly composed of eggs, fried in oil or butter fried and commonly folded over fillings like meats like ground beef, chicken, pork, canned or cured meats like hot dogs, meatloaf, or hotdogs, vegetables, mushrooms, chives or a mix of all of the above, some even loaded them up with cheese. The eggs are even mixed in with milk, water, mayo, or cream to make them fluffier. Omelets have been said to have originated from Ancient Persia, and according to the History or breakfasts, they are nearly indistinguishable from an Iranian dish called kookoo sabzi. This was named the French word ‘Omelette’ in the 19thcentury. The founding legend of the Easter omelets where Napoleon Bonaparte traveled around Southern France and decided to rest around Bessieres. Where Napoleon feasted on a omelet made by the innkeeper and found it as a culinary delight. He liked it so much he asked the town people to gather eggs and prepare a huge omelet for his army.

Nowadays there are a long list of omelet versions, from adding herbs like rosemary, thyme, tarragon, and chives, some mixing in mushrooms, and other countries adapting the dish and adding peas, spinach, and asparagus with other adding truffles, making a sweet or savory omelet depending on the origin or to suit each ones palate.

Why try this Potato Omelet Recipe?

For this Potato Omelet Recipe, all you need to do is prepare some potatoes, chopped and placed in water to avoid oxidation, oxidation causes the potato to turn dark and unappetizing looking, this also helps remove the starch in the potatoes, starch is the reason why the potatoes are high in carbohydrates, these are set aside while you prepare the other ingredients, like slicing the meatloaves to cubes, and preparing the egg mix made of a combination of salt and pepper beating these till fluffy. Prepare a frying pan and heat some oil to fry some potatoes just for a few minutes till it’s a bit soft, cutting the potatoes a nice small size makes it easier to cook, if you do cut it into bite sized pieces it may take around 10 or more minutes till its surely cooked through. Add in the meatloaf and sauté these for a few minutes till its browned. You can also use ham, hotdogs or sausages depending on your taste and cook these till lightly browned. Carefully pour in the egg mixture a making sure it’s covered the whole bottom of the pan. Cook this for a few minutes till its solid enough to flip, flip this with a spatula if you can or use a plate to help flip it whole, then place it back and cook the other side for a few minutes before serving it on a plate topped with a drizzle of ketchup or mayo, or even siracha for a little kick, and sprinkle over cheese or chives.

Try this out not just as a breakfast recipe, but spruce it up and add more meets, cheeses and any other veggies to make into a light dinner, easy lunch or bring it out for a picnic or a healthy dish for a barbeque.

Take your breakfasts, brunch, lunches and even dinners to an eggy, cheesy, simple upgrade by making this deliciously tasty recipe. Delicious hot or cooled, perfect for a snack or even as late night munchies that’s not only healthy and filling but also just needs as few as 5 ordinary ingredients and as little as 7 to 10 minutes. Mix it up with your favorite meats or veggies, or top it with your favorite condiments this dish is perfect to eat as itself, as a side, or topping for rice or fried rice for the ultimate breakfast meal.