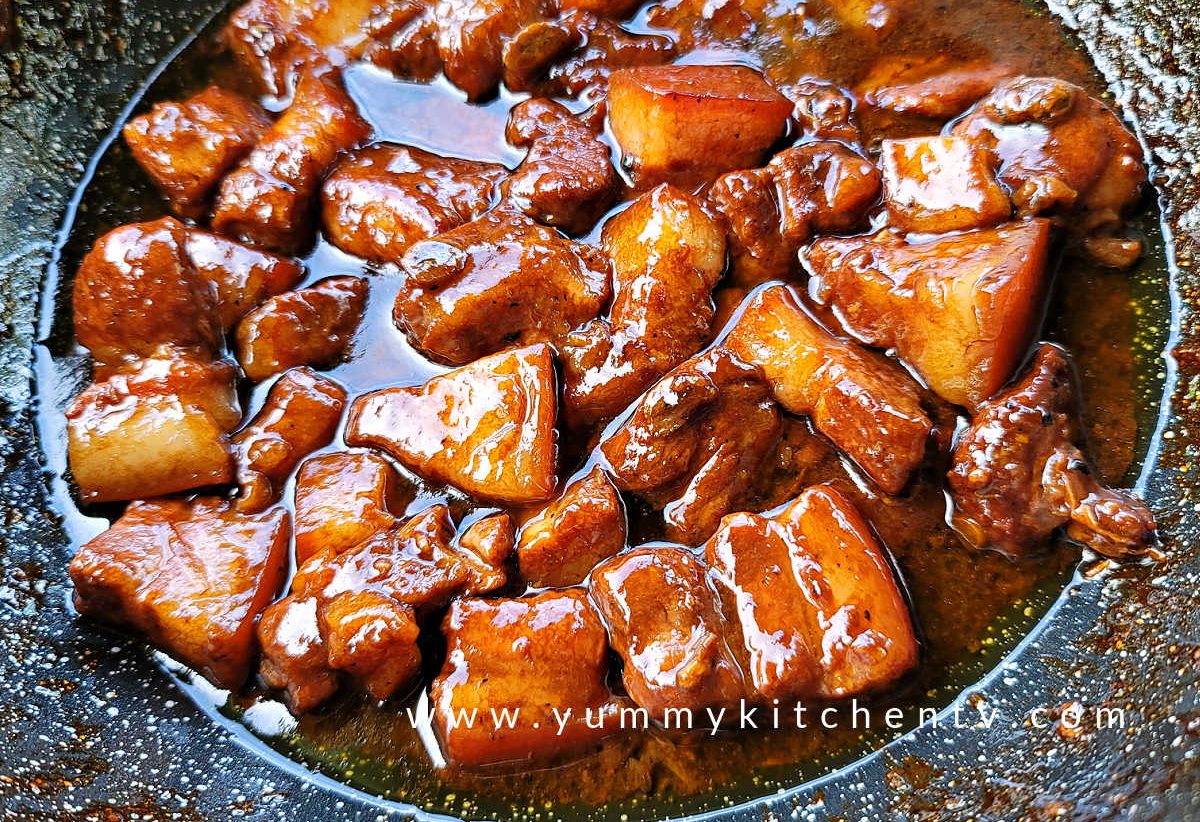 Braised Pork with Coca Cola is made by braising pork chops in a coke based sauce made by coco cola, ketchup, soy sauce, oyster sauce, butter, garlic, calamansi juice and pepper. This pork in coke dish will tickle your taste buts with its savoury taste with the sweetness of the coco cola. This quick recipe is super easy and hassle-free. Try to make one today!

Among the different cooking methods, braising is one of the easiest. By definition, braising is defined as combination of cooking the food in dry heat and then in moist heat. Both meat and veggies are braised in some dishes. They are first browned under a high temperature and then simmered in a small amount of liquid until it becomes tender.

For meats, the initial browning caramelizes the outer layer which add flavor to the liquid to be added later. Braising can tenderize the meat more and dissolves some of the collagen, giving the liquid a thicker consistency for a richer sauce.

Braising can be done slow or fast. The initial browning is done in an open pan but the braising in liquid must be done is  a closed-vessel. You can do this in the home by simply covering the pan or using a pressure cooker.

I usually cook braised pork as a baon everytime I go hiking with my family. I marinate the meat overnight and then wake up early in the morning to have it started cooking. With the bite-sized pork cuts, this makes a good rice topper especially to occassions like this where we should not bring too much stuff. All we need to bring is a large rice cooker, some disposable rice cups, the tupperware with the braised pork and a water jug. The flavors in it are flavorful but not scary enough to cause diarrhea or something.

Braised pork is a super simple dish I like making when I have less energy to work in the kitchen. This dish is very suitable for working moms who wants to serve a lovely dish but with effortless cooking.

What I love about this braised pork recipe is that it quite resembles the taste of a barbecue. If you look at some of its ingredients, the ketchup, oyster sauce, soy sauce and Coke/sugar are all ingredients of a basic barbecue sauce. If I were to really compare, braised pork is much healthier as it is not grilled and it’s a big plus points that it super hassle-free to prepare. After cooking, braised pork is truly melt-in-your-mouth sarap.

If you want to know how I make my braised pork, simple read and follow the recipe below. Have fun cooking!

HOW TO MAKE BRAISED PORK IN KETCHUP AND COKE

Braising some lovely pork for your family lunch is surely quick and simple. The only two things you need to do is to marinate and then braise. Super easy, right?

Simply marinate the pork in a concotion of the top Filipino comfort tastes from ketchup soy sauce, oyster sauce, calamansi, garlic and of course, nothing can beat the caramel sweetness from the Coca Cola.

Braise the pork in its marinade until the sauce is tender. Most of the time I don’t add water since the marinade is enough to soften the pork.

This dish will take around less than an hour to be done. Cooking will be faster and pork will be more tender if you will braise using a pressure cooker.

Once the pork is tender, the braised pork is done and is ready to serve. Grab a big bowl of hot steaming rice and top it with some melt in your mouth braised pork!