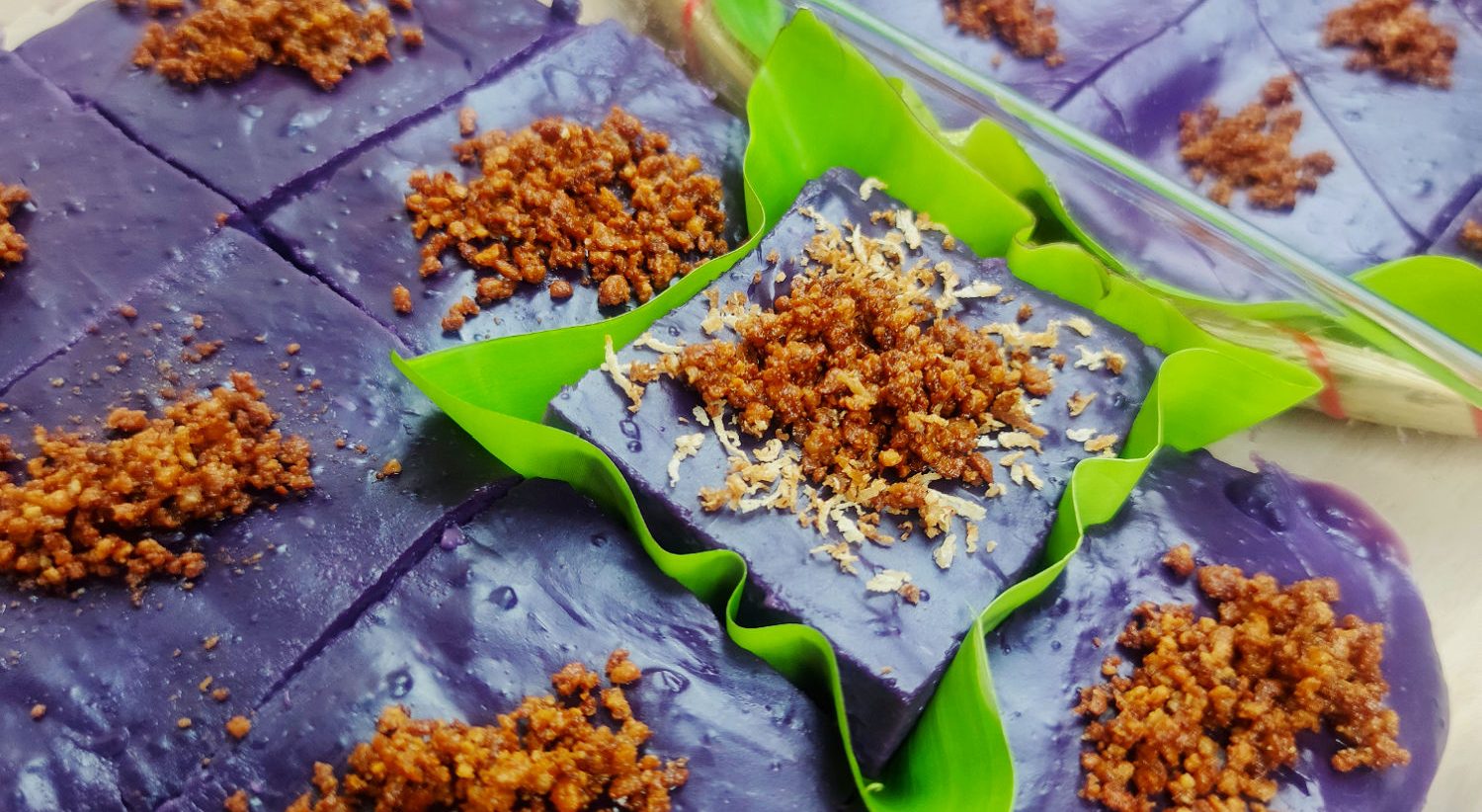 Ube maja is a popular Filipino sweet dessert. Ube maja is a type of kakanin commonly sold in markets. It is made from a mixture of different types of milk and then made into a pudding enhanced with ube flavor. It is also called purple yam pudding.

One of my favourite flavors is ube. My mouth started watering for ube when I tasted an ube ice cream when I was a child. Every then until now, I started thinking on applying ube in different kinds of food. This type of kakanin is always present in the kakanin aisle of the market. There are a lot of kakanin vendors with a lot of maja but the ube maja is always fully-consumed. One could really enjoy it as a snack or a dessert. I really like my ube maja chilled. Once I took a bite of this luscious dessert, I always shift immediately into a good mood. Ube maja is my happy food.

Ube Maja is a version of the classic kakanin, maja. The original maja is commonly flavoured with corn, and this ube maja is flavoured with ube. The purple color of the ube actually made the kakanin more interesting and appealing. During family reunions, I am always assigned to make large batches of maja. I always make 3 kinds of it – the plain, ube and pandan flavor. The ube maja was always the first one to run out. This just proves that ube maja is at a different kind of level.

Ube maja is a very easy snack to make. You are just mixing the different milks and then turning it into a jelly-like consistency until it sets and cools down and that’s it! Your ube maja is done.

Whenever I bought different kinds of kakanin, my favourite vendor always give me a lot of latik which I specifically requested. At first, I am clueless on how latik is made. It seems complicated. I was thinking that it was made with dried coconut meat added with sugar. But as I looked up on how to do it on the internet, I was really surprised that it was made using only one ingredient and it is not dried coconut meat! It was coconut cream all along. I didn’t know that coconut cream curdles when heated for a while. My discovery on how to make latik caused me to be a latik person. A latik person like latik so much that she/he makes latik almost every day and add it to different kinds of food, even a not kakanin one. Latik really goes well with ube maja. There are a lot of possible ube maja toppings but for me, the latik is the best one.

HOW TO COOK UBE MAJA WITH LATIK

A maja is a combination of different types of milk. Pour the coconut milk, evaporated milk and ube-flavored condensed milk in a large sauce pan. You may add 2 drops of ube flavouring for enhanced ube flavor and a more purple color. Mix the milk mixture gently using a wire whisk. Cook the mixture under medium heat. Stir gently to avoid burning. In a separate small bowl, dissolve 1 ½ cup of cornstarch in 1 cup water. Dissolve the cornstarch well. Set this mixture aside. Check on the milk mixture.

When the ube maja is set, add some latik toppings on top. Serve and enjoy!

Watch how to Cook Ube Maja with Latik