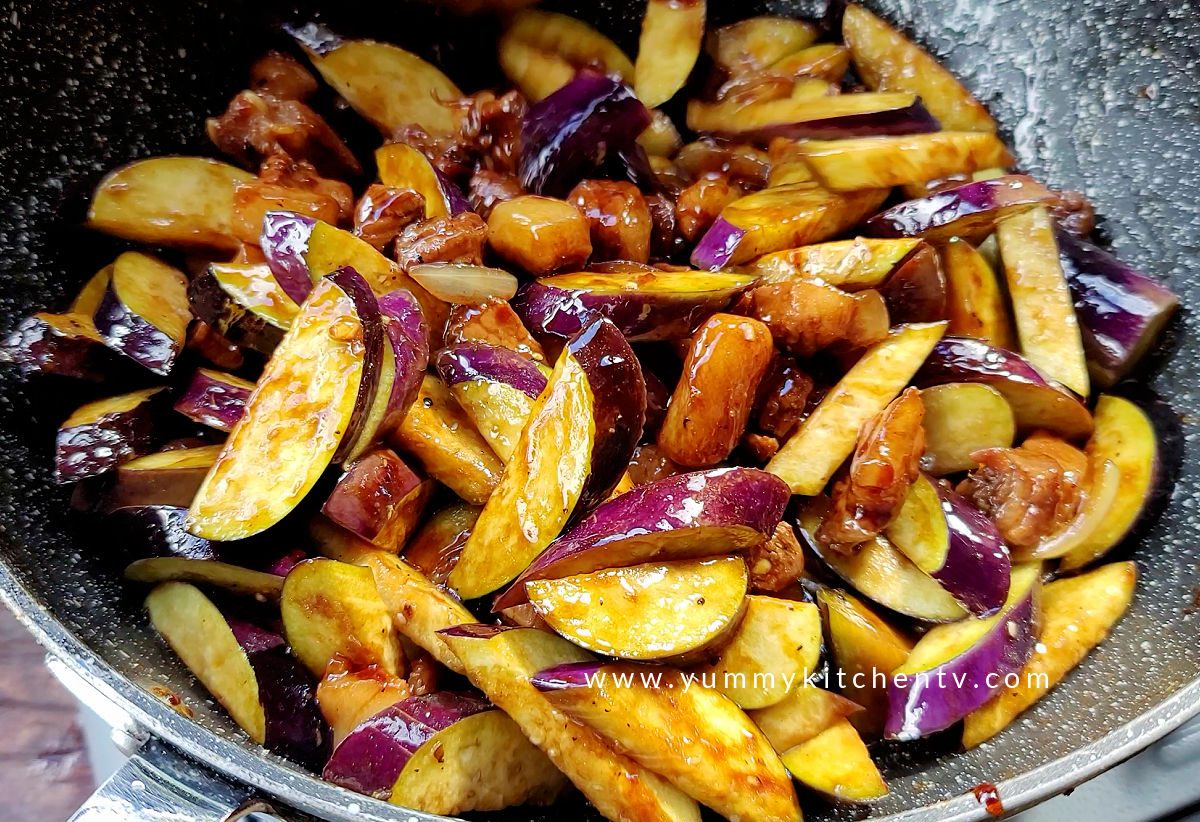 Pork stir fry with eggplant is made by sautéing fried pork belly, eggplant, bell pepper in a sauce made by soy sauce, oyster sauce, pepper, onion, garlic and water. This dish comprises tender and meaty pork cuts and soft eggplant coated with the simple umami sauce. This is another rice topper dish you’d surely want to try! Follow our Pork stir fry with eggplant recipe, to make this dish in your home

With all the samgyup craze, my love for pork intensifies. I always have a stock of pork cuts in the fridge just for my samgyup craving. With all my pork intake, I felt a little unhealthy with my meals. Since I cannot give up the pork in my life (I tried but I really can’t), I just committed to having veggies every time I’m going to eat pork.

Stir frying pork is one of the basic dishes one can make. The best thing about stir fried pork is that there is really nothing much to do until stirring them. What I love with stir fried pork a lot is the rendered oil from the fat because this oil can solely be an ulam!

With my commitment to having veggies with pork, I added one of my fave veggies, the eggplant. Eggplants are really cool since they become soft and mushy when cooked. I really love the contrast of the textures between the pork, the eggplant, and my hot steaming rice. This is one of the best toppers you can put on rice!

If you wanna know how to make this quick pork stir fry with eggplant recipe, read and follow the simple steps below. Have fun cooking!

HOW TO COOK PORK STIR FRY WITH EGGPLANT

Stir fried dishes are the simplest and quickest dishes to make. This dish can be made in less than an hour, best served during busy days.

Prepare the eggplant pieces by slicing them. Vegetables like eggplant become dark when exposed to air so soak them in water until it’s time to use them. Next, slice the bell peppers.

Since we are using pork belly, we won’t need to add any oil in our pan. This meat cut is fatty and will render some oil during the cooking process. Saute the pork brown and until oil is rendered. To make sure that the pork is fully cooked, pour some water and let it simmer.

When the pork is tender, the water is also dried up. A new set of oil will be rendered. Use this oil to saute the aromatics. Then, add the eggplant pieces and saute. Plain stir fried pork and eggplant is already good, but for some savoury and umami action, let’s add some oyster sauce just to coat each piece.

The bell peppers are added last since they cook quickly. After a few minutes, the pork stir fry with eggplant is ready to be devoured. Prepare some hot steaming rice for you will surely go unli rice with this one! Enjoy!