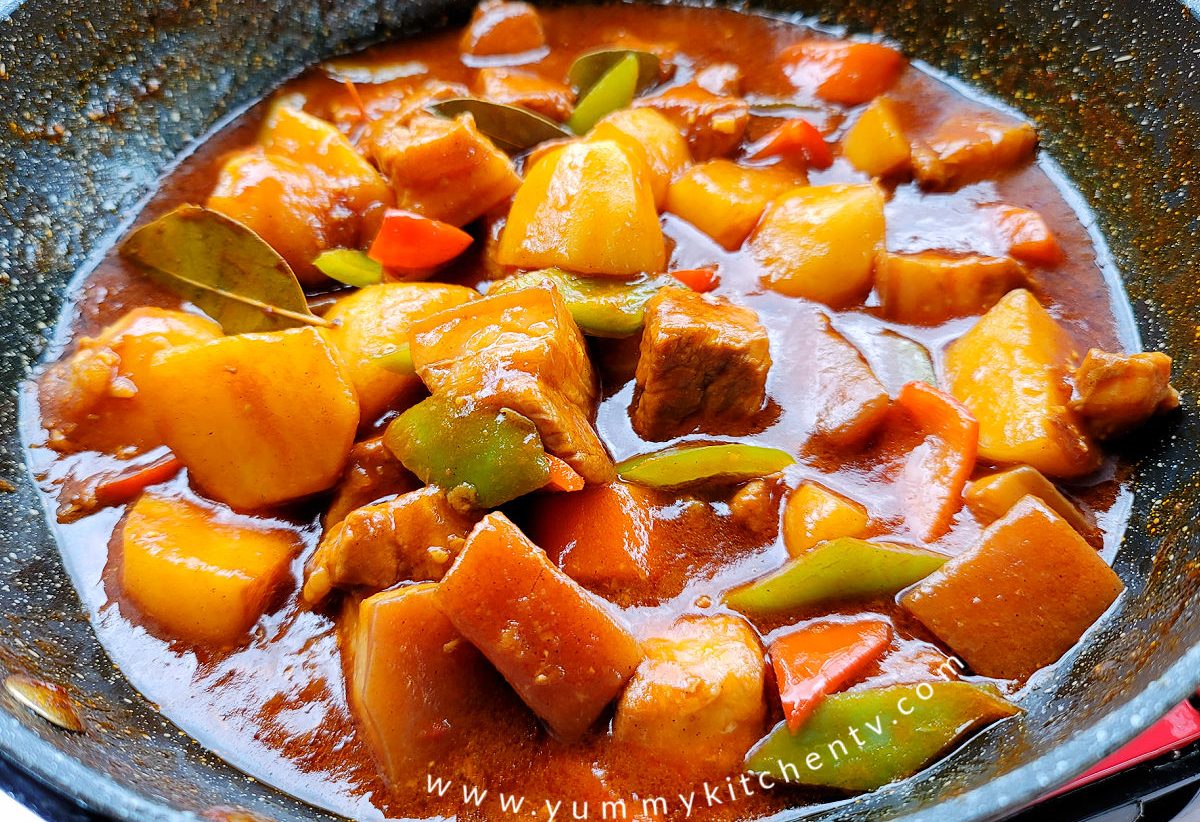 Pork mechado is made by simmering pork belly in a sauce made with soy sauce, calamansi juice, pepper, tomato sauce, onion, garlic, tomatoes, potatoes, carrot, green bell pepper, red bell pepper, bay leaves and pork cubes. This savoury dish is one of the common stars during occasions but also serves well during regular lunches. Best eaten with a bowl of hot steaming rice.

MECHADO VS THE WORLD

Philippines shelters an abundant list of tomato-based stews. And with that, there is a great confusion among these dishes. I am personally confused at first. Even now that I have a lot of cooking experience!

Among the tomato-based stews, the top 5 dishes which gives us massive confusion are: pochero, afritada, menudo, mechado and kaldereta.

I researched a bit to answer this confusion and to also share it with you. Well…. As I gathered different resources, most of them contradicts one another. I guess there’s no really concrete reference for the master recipe of the 4 dishes.

Let’s just believe what our lola or lolo taught us in making them. Have fun!

It was believed that the word “mechado” came from the Spanish word “mecha” which means wick. The traditional version of the mechado is cooked quite differently unlike how we prepare them today.

Beef is usually used for a mechado dish wherein bits of pork fat are inserted in the middle. These fat will melt during the cooking process and will add moisture to the beef.  The pork fat will come out of the beef looking like a wick or “mecha”, and hence the name “mechado”.

The mechado recipe I am going to share is the one that has been passed down to me from many generations. Unlike the traditional one, this version will be using pork and tomato sauce.

Pork mechado is essential to every family celebration. The table is not complete when no tomato-based dish is present. Since family gatherings are limited, I added this dish to our regular lunch and dinner meals. It still brings the festive feeling for me even without a special occasion.

To have a yummy and delicious lunch, make some pork mechado and have it with a lot of newly steamed rice!

HOW TO MAKE PORK MECHADO

The first step is to marinate the pork cuts in a marinade made with toyomansi and black pepper. Best if you can do this overnight so the flavors will totally sip in.

Heat some oil and saute your vegetables separately just to brown them a bit and then set aside. Stir fry the marinated pork with the marinade until the fat melts and oil starts to come out. Remove the pork from the pan and reduce the oil. Just leave a little for sauteing.

Saute your aromatics and the marinated pork. Add the rest of the ingredients (except for the veggies) and allow the pork to become tender. After around 40 minutes, the sauce has been reduced. Add the veggies and toss gently to coat them with the sauce. Do the final taste adjustment before serving.

Prepare a lot of rice because you’ll surely go unli rice with this dish!