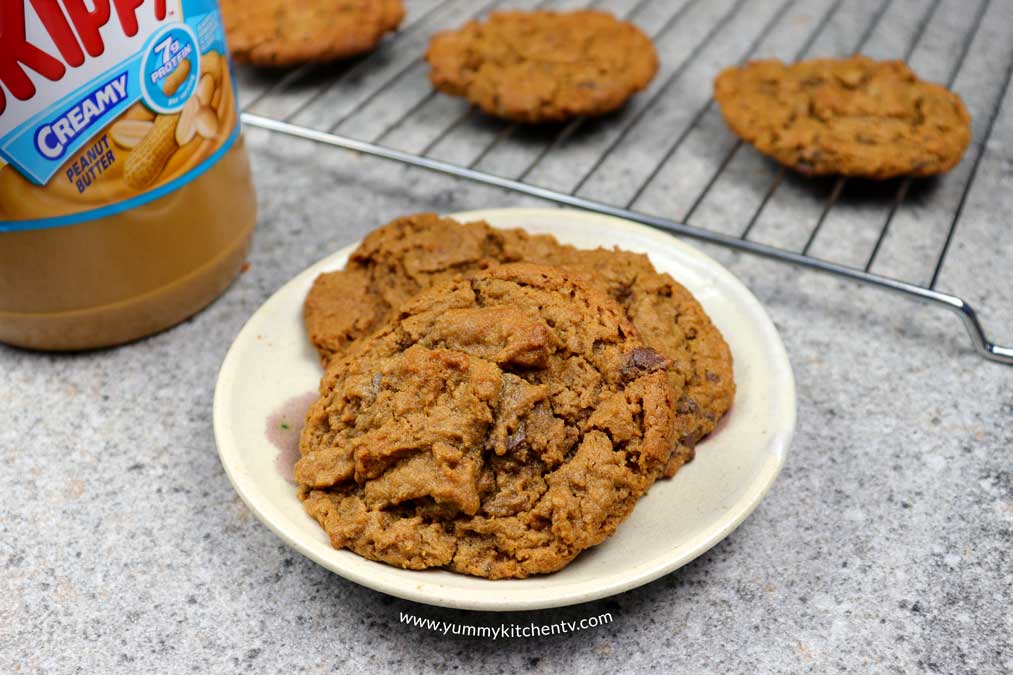 Chocolate peanut butter cookies, golden-colored sweet crunchy, with a chewy centre peanut butter cookies is made by baking a mixture of sugar, peanut butter, egg, baking soda and chocolate chunks. These delightfully golden colored is a popular snack and a favourite for lot of people in all over the world. Make this recipe in your home by following our recipe, that juse need 5 ingredients.

From peanuts to peanut butter to Peanut Butter cookies

Peanut are native the in the Western Hemisphere and are grown in tropical and subtropical regions. Said to be originated from South America and spread through the Spanish fleet. Peanuts were one of the items brought back by the Spaniards to Europe, trading slowly came around and brought the humble peanut to Africa and Asia. These were then considered food for the poor, one was because the growing and harvesting method was slow are hard to handle, and because the arrival of peanuts came with ships carrying slaves in the 1700’s. It wasn’t until the Civil War that the peanut was associated to the Southern part of the United States. After the Civil War the popularity of peanuts skyrocketed and by the 19thcentury the production for harvesting and processing developed and expanded which contributed to labor saving equipment, a demand for peanut butter, peanut oil, salted or roast peanuts, and other peanut based confections.

As time went one different ways of consuming the peanut was made, from Africans using grounded peanuts to turn into stew, Chinese using crushed peanuts to create sweet creamy or savory sauce, and the Civil was soldiers dining on ‘peanut porridge’. Peanut butter started as a peanut paste in 1890, St. Louis. Supposedly by a unknown physician who encouraged George A Bayle Jr., an owner of a food products company to package grounded peanut paste as a protein substitute for people who couldn’t chew and has poor teeth, they mechanized the process of grinding peanuts and selling the peanut butter out of barrels for 6 cents per pound.

At the same time in Battle Creek, Michigan, Dr. John Harvey Kellogg was experimenting with peanut butter, using this as a source of protein for his vegetarian patients. His brother W.K. Kellog a sanitarium business manager for Western Reform Institute, opened the Sanitas Nut Company that supplied peanut butter to local grocery stores. This peanut butter paste like adhesive wasn’t as tasty and iconic as the peanut butter we have now, the peanut butter process back then was steamed compared to today’s roasted nuts that added a more intense charred flavor, prior to grinding. The Kellogg brothers then changed directions and went into the cereal business and gained worldwide recognition.

It was a Kellogg employee, Joseph Lambert who worked on developing the processing equipment and begun selling peanut butter grinders in 1896. His wife Almeeta published a but cookbook called “The complete guide to Nut Cookery” three years later, and after 2 more years the Lambert Food Company was created.

This long history of how it came to be from the simple but to the peanut butter we now all love and adore has challenged many to recreate and invent new ways on incorporating the smooth or chunky peanut butter into many delightful desserts.