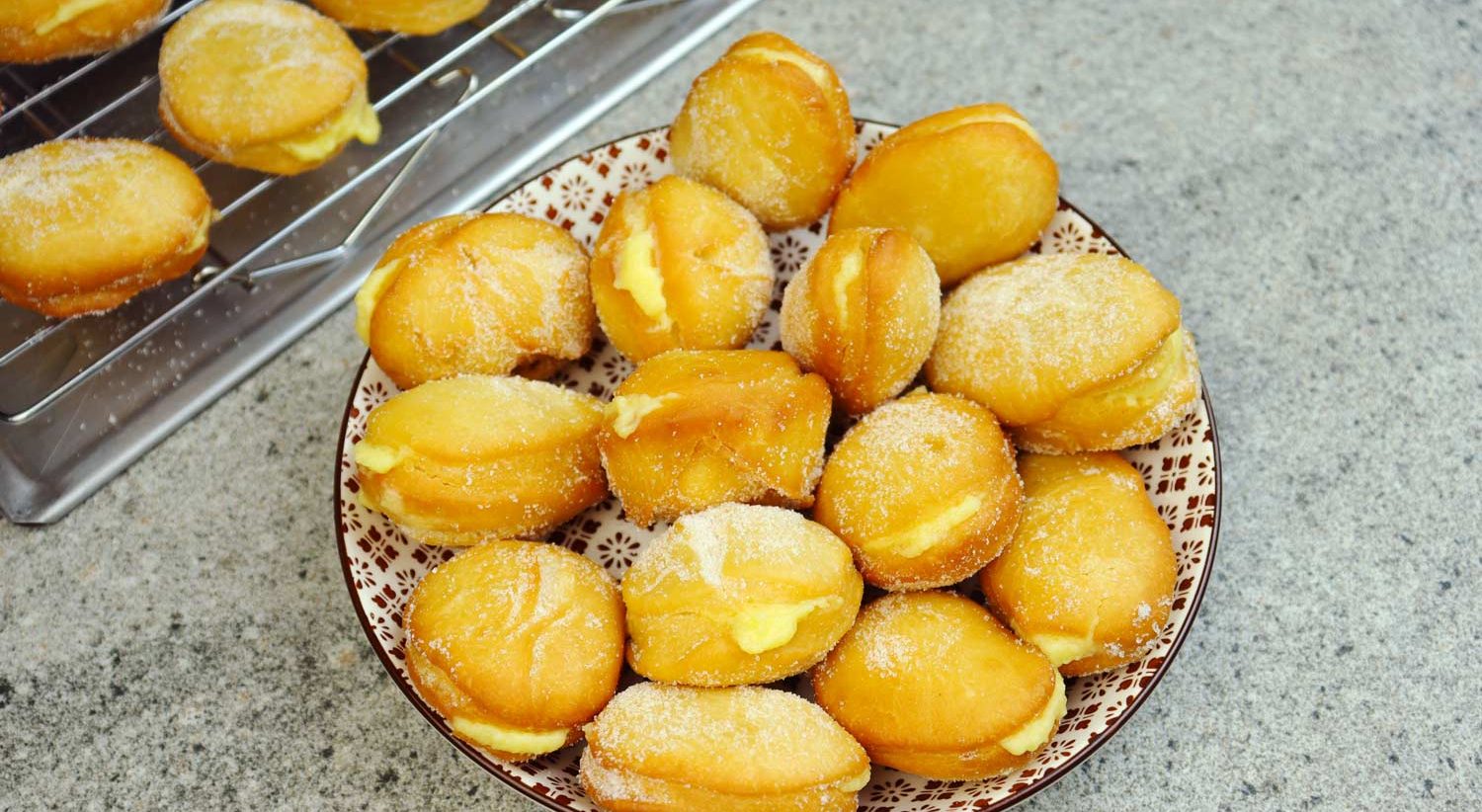 No Yeast Donuts is made by filling sweet custard inside a donut made with egg, sugar, all purpose flour, powdered milk and with baking powder. These No Yeast Donuts are an easy to do, delicious treat that’s not only zero fuss but are quick to make! Have a go with this No Yeast Donut recipe and just see your kids, friend and family wait around the kitchen anticipating for the first donut to take a bite of.

Can you really make these without Yeast?

Yes you can! Though Donuts with yeast can make that really nice soft and fluffy donuts that gives you a great bun that is elastic enough to be filled with a creamy custard. No yeast donuts can still be that soft bun that’s decorated beautifully with granulated sugar and filled with custard. There’s nothing like fresh donuts that are warm to the touch and ready to be eaten, but there’s also no way to deny that these custard filled buns are deliciously addicting. One way that this No Yeast Donut works is that it’s made of baking powder which helps rise the dough to give it its donut shape, it puff up big enough to be able to handing the filling. In this case since unlike yeast using baking powder may make baked goods rise, but it can also deflate, that’s why it would be best to fill the donuts while it’s still warm.

How to make these No Yeast Donuts?

This donut recipe can also make mini donut balls where you can fill them with custard or dip them in a cinnamon powder and sugar mixture. Any which way, you can easily make these donuts to suit you and fill them up with our delicious custard. To make these delicious easy to do no yeast donuts, all you need to do is do the custard beforehand, you want to make this first to give it time to cool down and be thick enough that it wont melt of the donut while the donut is still a bit warm. All you need to do is mix the egg yolks, sugar, cornstarch to thicken, milk and whipping cream or all purpose cream, you’ll need to use milk and cream to remove any egg-y flavor that the yolk may still have especially if there are any egg whites hanging on the yolk. Mixed before adding it over the heat, this is to ensure that the eggs won’t get cooked before mixing everything together, once it thickens, turn the heat off and add the butter, mixing till it melts to give you a nice smooth and silky texture. Transferring it over to another container to avoid burning it in the pan, set aside to cool or cover and chill in the fridge while you make the donuts.

To make these no yeast dough donuts, all you need to do is mix up eggs, sugar, and water together. Sift in all purpose flour, powdered milk, baking powder as oppose to the yeast, and salt. Fold it in to make a soft dough, once you don’t see any leftover flour, add in the oil and knead it well to make sure the dough absorbs the oil. This is to give it enough ‘oil’ or moisture when it’s frying. Knead till smooth cover and ‘rise’ to make it easier to handle, smooth out and flatten over after, slice into donut shaped pieces, set aside while waiting for the oil to heat up. Cook these in batches to avoid the donuts from sticking with each other. Flipping them around till it browns, taking it off the pan over a rack or coting it in sugar while its still a bit hot to make sure it sticks, poke a hole in the middle and fill it with custard.

A fun, easy way to make donuts with items you probably has on hand at home. These donuts are sure to be even better especially filled with a creamy, silky delicious creamy custard recipe or any of your choice.

Donuts may just be one of the most indulgent dessert-snacks you can think of, glazed, custard filled, or dipped and filled with chocolate. There are just endless amounts of flavors and types of donuts that you’ll be overwhelmed with joy if you’re a fan of this pillow-y sweet deliciousness. Yeast free donuts don’t require much proofing and are easy to make, the dough instead has baking powder, which helps it rise and make enough space in the middle to be filled with a delicious creamy custard. There’s really nothing but a freshly made donut filled with a creamy custard to be enjoyed right at home.