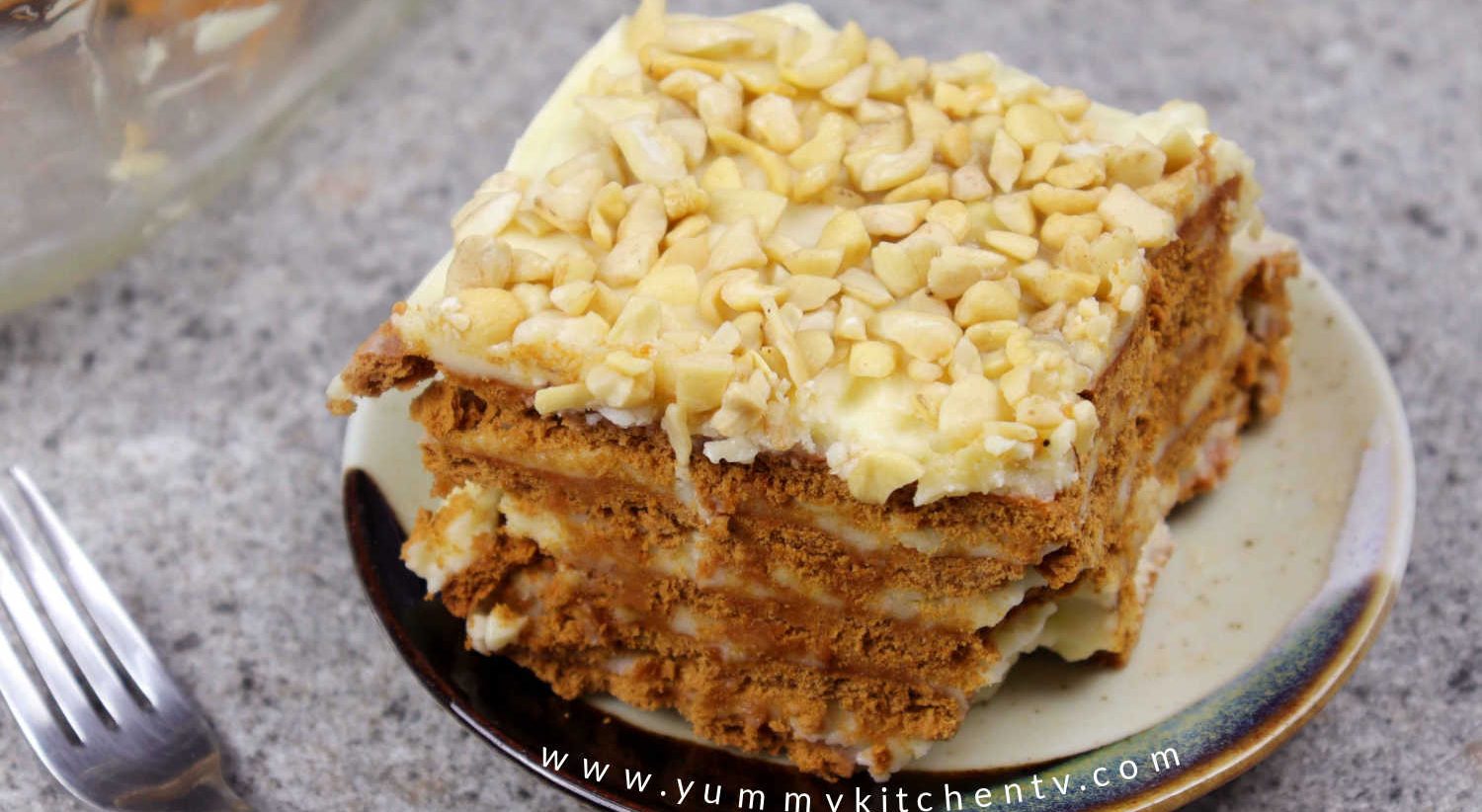 As a cake fan, I have tried all cakes from Red Ribbon. One of my favorites is their sans rival cake. It was the one I am always ordering for I cannot resist the alternating flavors of the nutty buttercream layer and the meringue. As time goes by, Red Ribbon stopped offering sans rival and of course, that made me sad.

With my usual social media scroll, I often look for new recipes which I can upgrade into my own version and share with you. It was a nice evening when suddenly I came across an appetizing and super gorgeous photo of the sans rival. It made me crave—a lot! I realized that, with all the desserts I have made the past, never once did I thought of making a sans rival. I believed it was a sign for me to try it so soon. I tried to sleep and just plan to go grocery shopping the next day. But with this intense craving I got, I decided to get up and look for something in the pantry which can even ease my sans rival cravings. I was lucky to found some graham crackers, butter and cashews. It was a 100% sign for me to do it that night.

I was surprised when I saw my niece standing next to me, waiting for the dish I was about to make. And now that’s a 200% sign for me to make some homemade sans rival. That’s when I first made this simple and quick sans rival.

The sans rival is a crunchy, creamy, buttery and nutty dessert made with alternating layers of meringue, buttercream and crushed cashews. By just reading the ingredients, you can already imagine the complementing texture and flavors of this wonderful dessert. The word sans rival actually translates to “cake without rival” in French. Who would really want to compete with the sans rival?

HOW TO COOK NO BAKE SANS RIVAL

Unlike the classic version of the sans rival, this version will not use eggs and will not be baked. If you choose to make a simple sans rival which is much easier and uses much simpler ingredients, try our 100% no fail sans rival recipe! Surprisingly, this 4-ingredient dessert will only take you 4 easy steps! Is it really possible? Let’s find out!

The sans rival has three basic elements—the crushed cashews, the buttercream filling and the graham crackers.

One of the elements of the classic sans rival are the meringue layers which are made from scratch. Instead of making them, we will use graham crackers in this version. It is much affordable and is always available in supermarkets. Once the cashews, buttercream filling and the graham crackers are prepared, it’s layering time!

If you have made graham cakes in the past, arranging the sans rival would also use the same steps. It will be much easier if you can use a square or rectangular dish for the sans rival. The first layer would be the graham crackers, followed by the buttercream filling and lastly, the crushed cashews. Using this recipe, I was able to make 4 to 5 layers in my square dish.

The remaining steps are totally effortless and wouldn’t cost you a sweat. Let the sans rival chill overnight for the buttercream to set and the whole cake to come together as one. Slice a big piece for yourself and enjoy this delectable dessert. Leave no crumbs behind!