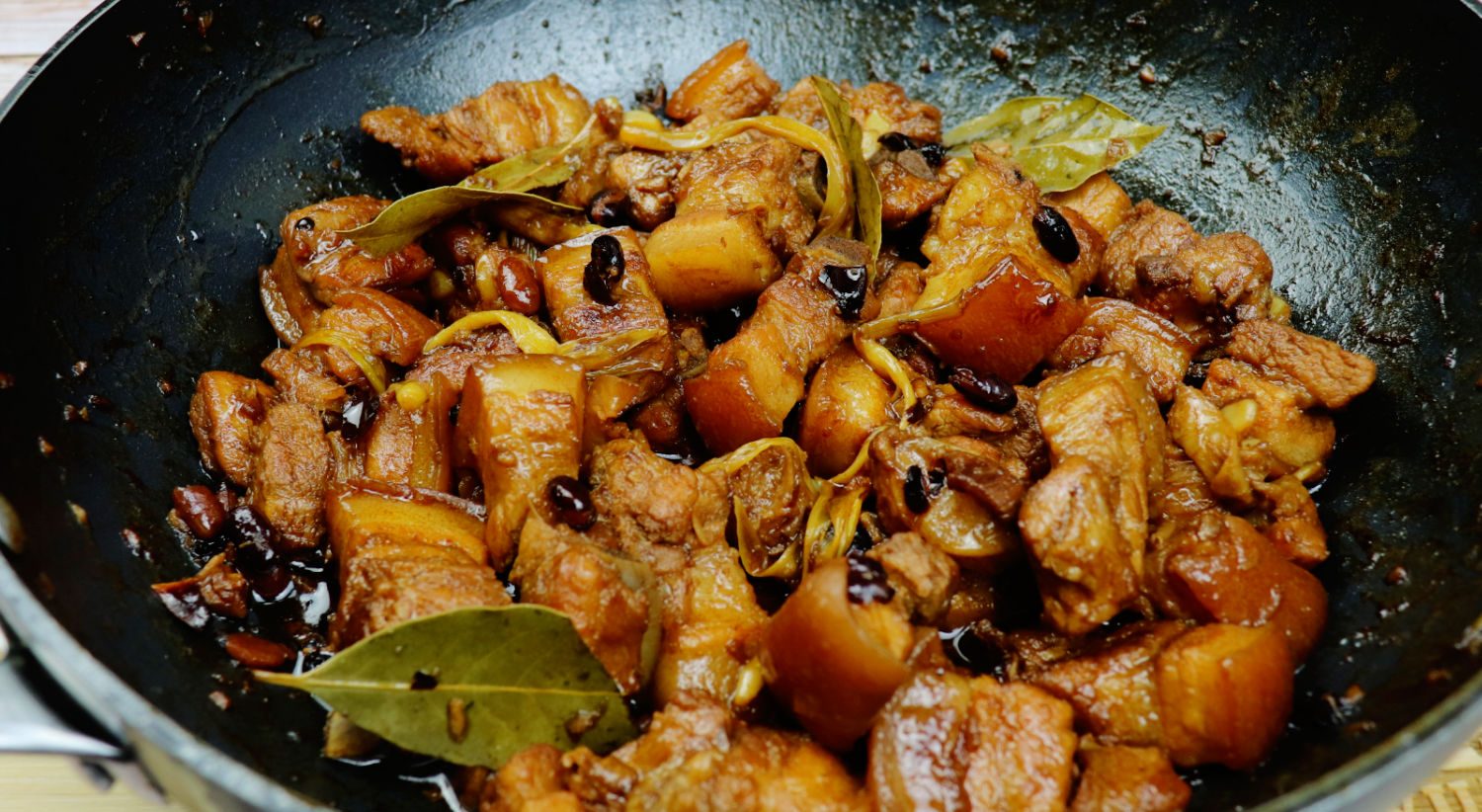 Humba is a sweet and savoury dish made with high fat pork rendered to caramelization and braised generously to perfection. It is usually served as an entrée dish with rice during lunch and dinner. If you are looking for a classic Visayan humba recipe, check this out!

With my visits to different parts of the country, different interpretations for the pork humba amazes me. Every humba recipe I tasted resembles the classic adobo, a savoury dish cooked with soy sauce and vinegar. One of the most promising humba recipe was the Visayan version. I then learned that humba is the Visayan version of adobo! In bisaya, humba was known to be translated as tender (hum) pork (ba). Unlike the humba from other places, the Visayan humba was known to be sweeter and fattier. Pork cuts usually used are the belly and liempo, which has a high fat content. Some of the significant ingredients of the Visayan humba are dried banana blossoms, different spices like peppercorns, bay leaves and star anise and tausi black beans.

There are different ways on how the sweet and savoury humba is cooked. Some recipes include marinating the meat and some sear the meat. Some recipes modify some ingredients. But the best humba recipe was the one cooked for love.

This recipe adapts the classic Visayan recipe of pork humba. Some modifications were made and are greatly recommended. If this dish excites you, just follow this easy humba recipe! Enjoy this savoury ulam with your friends and family.

HOW TO COOK HUMBA

Based on my current knowledge, different regions have different ways on how they cook humba. This is the recipe I got from my Cebuanagrandma, and of course, I definitely believe that this is the best recipe.

In this recipe, we will be using pork belly. There are no rules in choosing a pork cut for humba but I think pork belly has the right creaminess and meatiness when made into humba. When you buy pork from the market, you can notice that some pork belly cuts have really a higher fat-to-lean meat ratio. If we just straight up used them for humba, this will result to a very fatty and oily humba which your grandparents will blame if ever they got a heart attack. So for the first step, we are going to lessen some fat from the pork belly by rendering some oil from it. Just place them a pan, and let the heat melt some of the fat. This will give you a lot of oil, which you can use for other dishes. Caramelizing the meat while cooking will also enhance the resulting meat flavor. As you render, the pork is fried from its own oil. Once you are done, transfer the now fried pork to a container. Reduce the oil left in the pan to a tablespoon only. This is our starting oil for the humba. Don’t worry if you think that we will be needing more oil. Some oil can be rendered from the fried pork as we cook the humba.

Sauté some onion and garlic. Add the cooked pork and then continue sautéing. Add the black beans, soy sauce and vinegar. DO NOT STIR TOO EARLY. Let the humba simmer for a while, before you do any stirring. It has been a product of experience that when you add vinegar and then stir just right after, the tanginess from the vinegar will go all over the dish. Trust me, it won’t taste good. Simmer the humba for 3 minutes before adding the spices, lemon soda and water. For the lemon soda, I used Sprite #NotSponsored. Usual sweeteners for humba are brown sugar or muscovado sugar. The lemon soda will give your humba the right level of sweetness. I bet you won’t be needing sugar. It will also make the pork more tender.

At this point, the humba is very close to being done and all you need to do is to simmer it for a much longer time, 20 to 25 minutes, to achieve a melt in your mouth softness pork humba. The banana blossoms are added last since it cooks very fast. After simmering, transfer to a serving plate. Time to dig in! Unli-rice it is. Yum!

Watch how to Cook Humba