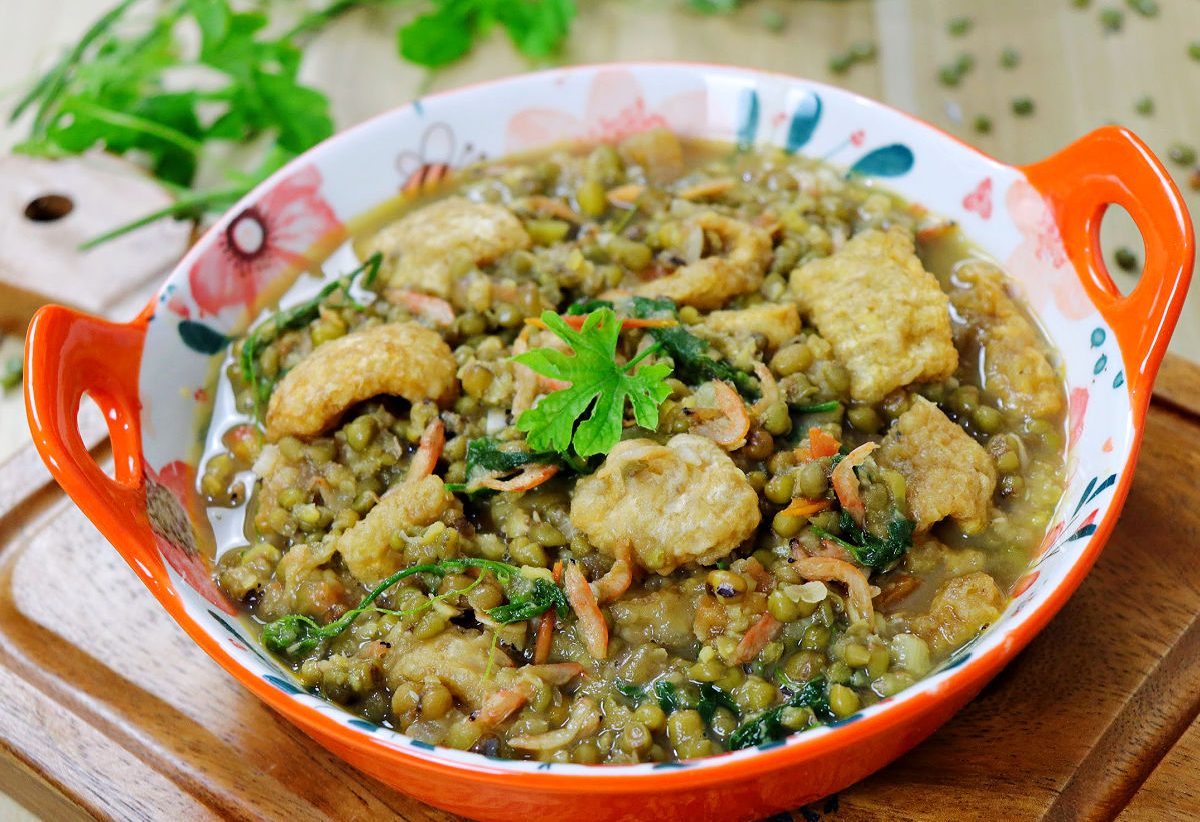 Ginisang Munggo is very popular budget friendly mung bean dish in Filipino. Ginisang munggo with chicharon and dried alamang is tasty varient of ginisang munggo, where dried alamang is added to enhance the taste. It is cooked with minced onion, garlic, tomato, broth cube and seasoned with fish sauce, pepper, ampalaya leaves, chicharon. So Start your week with a bowl of hot and hearty ginisang munggo with dried alamang topped with a lot of crunchy chicharon. The combination of shrimp, pork and aromatics will make a great side dish or a partner to your fried fish. Pair it with some fried fish and hot steaming rice to complete the meal

Some of you might have encountered this ingredient just now. Alamang is a type of fermented shrimp paste used as a condiment or a flavor enhancer to different dishes.

I was young when I first encountered this ingredient, and it serves as a condiment to my favorite hilaw na mangga (I’m literally drooling right now!). Later on, I knew that there was a dried version of this ingredient called dried alamang. It was the start of my exposure to this ingredient since then I was able to eat shrimp okoy which is made from the same ingredient. So yummy!

I was really fond of that shrimp okoy that I started making my own. I have a stock of dried alamang in a jar so I can make okoy anytime I want. Another variation of the dried alamang is the hibe. The shrimps are bigger than the ones in dried alamang.

We often prepare ginisang munggo during Fridays. Since my lola started losing her teeth, we prepare it more often (HAHAHA). What I love about ginisang munggo is that it is rich in protein and has a soft and tender texture, very suitable for my lola and lolo.

Ginisang munggo is a must-have every time fried fish is prepared at home. It pairs with any types of fish like galunggong, tilapia and boneless bangus. It can also be a good warm breakfast during the cold december season. The last best thing about ginisang munggo is that the flavor is not too overpowering. Leftover meats can be added to it without a problem.

I remembered the jar of dried alamang in my pantry. Alamang is best added to vegetable dishes like pinakbet. So why not add them in my ginisang munggo, right? And believed me it was good! The dried alamang made my munggo 100x better!

If you want to know how I made my ginisang munggo with dried alamang, read and follow the recipe below.

HOW TO MAKE GINISANG MUNGGO WITH DRIED ALAMANG

If you had tried making lugaw before, the steps are a bit similar only that you’re using mung beans instead of glutinous rice. Also, we will be using the dried alamang.

The first thing to do is to soak the mung beans in water. This is done to soften the seeds, making them easier to cook. If you have much time, soak the beans overnight or at least 4 hours before cooking. Remove the floating seeds the next day since they are mostly just seed shells.

In another pan, saute the aromatics and the dried alamang. In substitution, you can also use small shrimps or hibe. Add the cooked mung beans and stir gently to distribute the flavors. To make your munggo soupy, add some water. In this recipe, I used hugas bigas or rice washing to make the soup thicker.  Add the ampalaya leaves (or any green leafy vegetable) until it softens. Some people also include the actual ampalaya itself for a subtle bitter flavor.

You can add the chicharon at this point to make it soft or just top it later to retain the crunch. Serve the ginisang munggo with alamang as a soup or as a side dish. Enjoy!