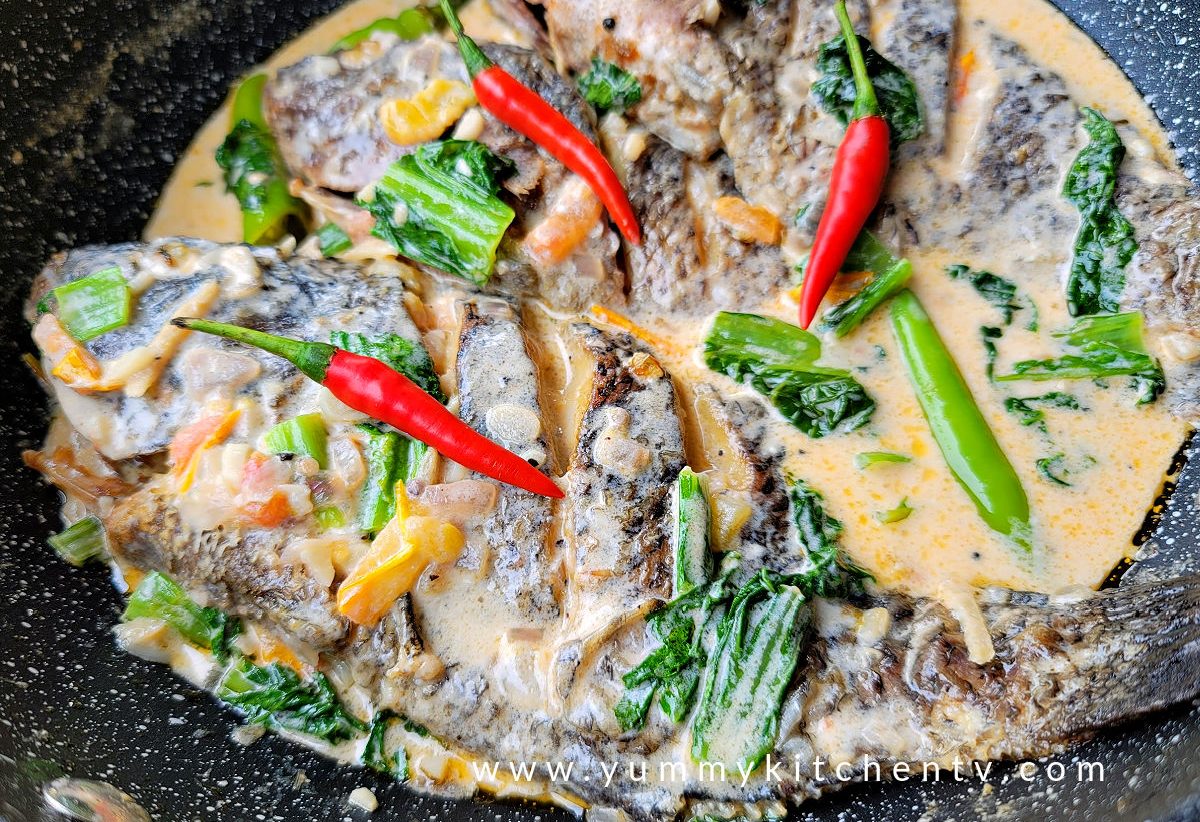 Ginataang Tilapia is a Filipino fish dish, made by cooking tilapia pieces in a sauce made with coconut milk, tomatoes, onion, garlic, ginger, mustard leaves, green chilies, pepper and oil. Optionally you can add vinegar to enhance the taste and aroma of the dish. This classic ginataang tilapia dish has a high calcium content that helps in the formation and maintenance of strong bones and teeth. Follow our Ginataang tilapia recipe to make this scrumptious recipe in you home.

Did you know that coconut is considered the tree of life? This is for an amazing reason.

As you can see, every part of the coconut tree can be transformed into new products.

In cooking, we benefit the coconut the most from its coconut meat. The niyog is grated and squeezed to bring out the coconut milk. It’s still so amazing that a plant can make milk!

Coconut milk has produced various delicious ginataan dishes like pork ginataan, bicol express, ginataang bilo-bilo, ginataang saging and many more. In this recipe, we will fuse the delicous taste of this plant-based milk with one of the most favorite fishes in the country, the tilapia.

The word “ginataan” has a root word of “gata” which is the Tagalog term for coconut milk or cream. This term is used to describe dishes which are made with coconut cream or milk.

I prepared paksiw na bangus the other day and noticed that my lola had a hard time eating the bangus due to the complexity of its bones. Good thing I have a tilapia stored in the freezer which I immediately thaw. I was first thinking of simply frying it and serve with some tomato ketchup but I thought, why not give more effort to it? A saucy dish will also make my lola happy. I gathered her favorite mustasa leaves and incorporated it with the dish.

Tilapia is one of the easiest fish to devour. It has a large body and fresh white flesh. The flesh is very easy to separate from the fish bones which makes it hassle-free when eating. With these characteristic, tilapia is one of the best fishes you can use in a ginataan recipe.

If you want to have a fun time in eating fish, choose tilapia and choose a ginataan dish. Any person of all ages would simply love this! No complex bones and no surprising flavors. Swabe eating only. Try and make some today!

HOW TO MAKE GINATAANG TILAPIA

In making ginataang tilapia, the two important components are the fish and the coconut sauce.

Preparing the tilapia is similar in making simple fried fish. Rub some salt and then fry until brown on both sides. Remember to make some slits so that oil can enter the fish’s flesh. Let the fried fish sit for a while as we make the coconut sauce.

The coconut sauce is actually very simple to make. Start with sauteing your aromatics and the coconut milk. Remember that you are cooking milk so only use low heat. Do not cover the pan to prevent curdling. Add some red and green chilies if you prefer a spicy ginataan. Add mustasa leaves (or any leafy vegetables) and let it cook in the sauce.

The last thing is to combine the sauce and the fried fish together. Add the tilapia back to the pan and let it absorb the coconut sauce. Transfer the the ginataang tilapia to a serving plate and serve with hot steaming rice. Enjoy!