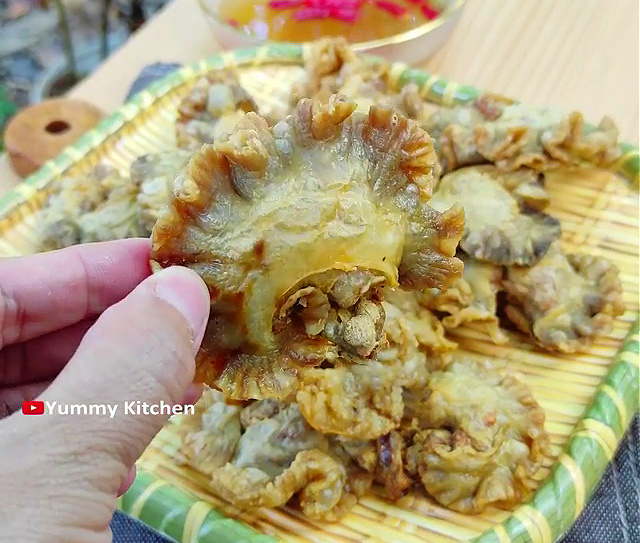 Chicharong Bulaklak is very popular dish in Philippines and it really unique and can be found any where in Philippines. In this Chicharong Bulaklak recipe you can see that we are showing step by step instructions for making Chicharon Bulaklak. This crunchy Pinoy snack is one of the best ngutngutin next to chicharong baboy. Also best served as a pulutan with some ice cold beer. Putok batok sa sarap!

If you’re guessing that this chicharon is made from flowers.. engggk!! Sorry, you got it wrong. The reason why this chicharon is called “bulaklak” since its shape resembles flower petals. Unlike the chicharong baboy which is made using the pork skin, chicharong bulaklak is made from the ruffle part of the pig. More specifically, this part is located in the peritoneum area (or the pig mesentery) of the intestines which connects the intestines to the abdominal wall.

Since we do not look at the insides of the pig all the time, the best way to look for a ruffle part when you go shopping is looking for the intestines which are ruffle in shape. If you are not sure what to look for, imagine a ruffled dress. And then imagine the ruffle as a meat. That’s it! Hahaha. Or simply ask the butcher for the chicharong bulaklak. Not all groceries has ruffle part in stock. You might want to check special meat shops for them.

What makes chicharong bulaklak stand out is the mixture of texture it holds with every bite. The edges of the chicharon is a bit thin, while the center is a bit fatty. When fried, the thin edge is super crispy, much like a fried chicken skin, and then the center is fatty and oily but very chewy. For those who

Every food business starts with some food cooked at home which you want to share with others (but not for free! Haha). Chicharong bulaklak is one of my “subtle” businesses which I sell whenever I make a large batch.

I usually make some chicharong bulaklak when there is an upcoming celebration = inuman at home. I’m always bida during these inumans. I want to provide a variety of pulutan to the visitors. Chicharong bulaklak is definitely one of the best partner you can have with some ice cold beer.

If you wanna know how to make some chicharong bulaklak, read and follow the simple steps below. Happy cooking!

HOW TO MAKE CHICHARONG BULAKLAK

Making chicharong bulaklak is very simple. But to warn you, this may take a long time. It is better to do them in large batches so that your time is valued.

Buy some pork intestines in the market. Make sure to get the ruffle part and not the one which is used in making longganisa. This part is usually found in the innards section near the liver, gizzard and hearts part. You can easily spot the ruffle part once you see the meat with curled up intestines, which is almost shape like a flower.

To start, clean and wash the pork intestines. Boil them first to fully cook them before we fry them. Add the seasonings like bay leaves, garlic and peppercorns. Boiling may take up to 40 minutes. The pork intestines is chewy but bite-able when cooked. If you have eaten isaw, our goal is to attain that chewiness. You can do a taste test to confirm.

Before frying them, transfer them first to a bowl and sprinkle a gorgeous amount of salt. A little science on the side, the salt attracts water. The salt added in the pork intestines make them drier, and will result to a crispier chicharong bulaklak.  Lessening the water/liquid also helps to avoid oil splashing for later.

Finally, deep fry the chicharong bulaklak. I usually do mine in a large talyasi in a homemade bonfire outside our house. The deep frying may take up to 30 minutes or longer if you are doing a large batch. Remember to keep the heat low to prevent them from burning. Once golden in color (just like the regular chicharon), you may now transfer them to a strainer to drain excess oil.

I usually rest them for a while before eating. Having some air pass through them dries the extra oil in them, making them extra crispier. Prepare your favorite special suka as you serve this chicharong bulaklak. Super yum!