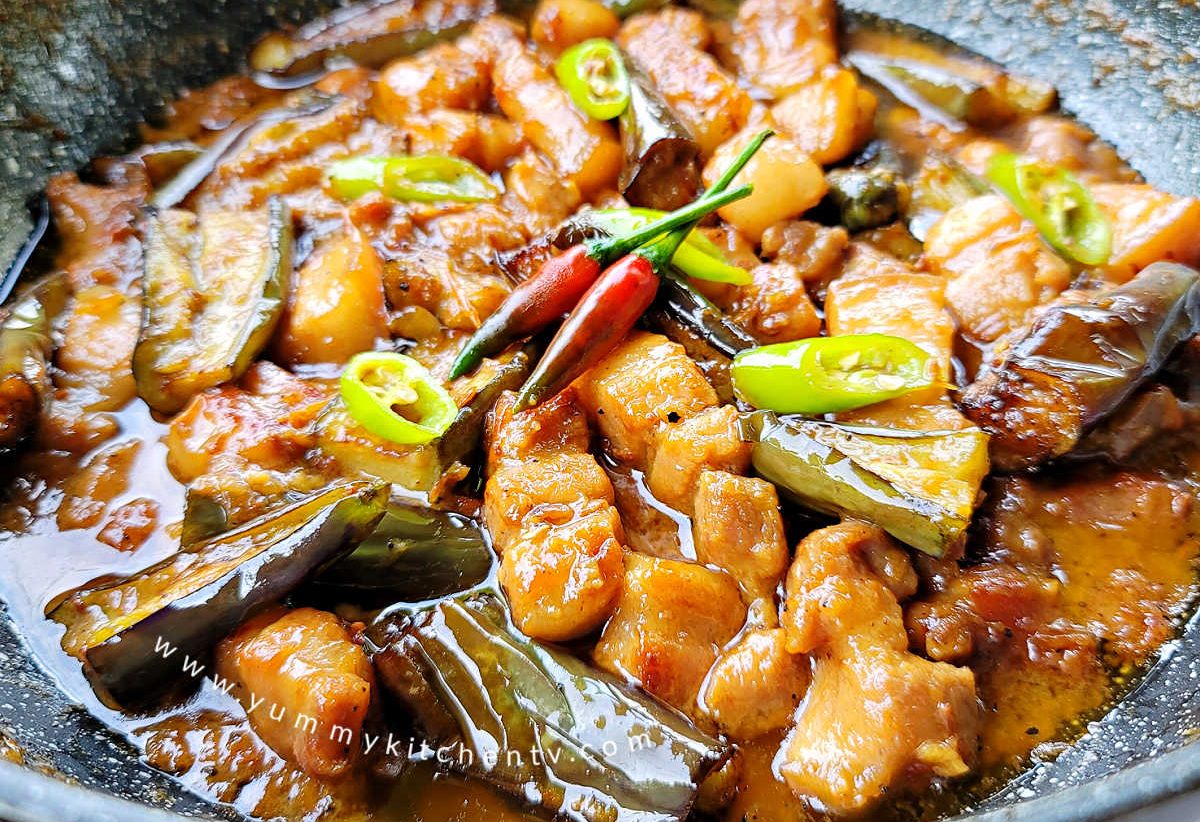 Pork binagoongan with gata is a variant classic Pinoy pork Binagoongan, made by cooking pork in sayteed shrimp paste. In this variation Gata (coconut milk) is added it to make it a creamy and savoury coconut milk dish with a hint of seafood freshness brought about by the umami flavor of the sauteed shrimp paste. The tender pork combined with the fatty sauce made with creamy coconut milk will surely be a hit on the palate. Best when spicy, and best paired with rice.

Pork binagoongan is my favorite shrimp paste dish after the pinakbet. What I love about this dish is that it resembles my other favorite food, bicol express, but with more umami because of the shrimp paste. This is the only dish where I can eat green chilies.

After harvesting a bunch of coconut, we grate them at home and prepare batches of coconut cream and milk. This is the season where we prepare dishes made with coconut milk, either ulam or dessert.

Pork binagoongan is one of the Pinoy classic dishes with coconut milk. As a health conscious, I don’t really enjoy oily sauces, except for this one. Oil rendered from coconut cream blending in some shrimp flavor si truly out of the ordinary. It has its own flavor which made my rice 100x better. Have it with tender pork and eggplants, the best!!

Pork binagoongan is a common dish at karinderyas. That is just an evidence on how this dish is truly a Pinoy favorite. This dish is super simple and you can make it at home. To know how to prepare one, read and follow the recipe below. Have fun!

HOW TO MAKE PORK BINAGOONGAN WITH GATA

Pork binagoongan is undoubtly one of the easiest to prepare among ginataan dishes.

Render some oil from your pork (searing them also adds flavor to the dish) and then fry the eggplants. Saute your aromatics while gently crushing the tomatoes. Add the sauteed shrimp paste and then saute. You can use fresh/uncooked shrimp paste if that’s what available. Simply rinse it in water first since it is too salty.

Pour some water and boil the pork until soft. If you have thin coconut milk, use them for a creamier flavor. Once the pork is tender, that’s the sign to add the coconut cream. Remember to lower the heat first to prevent the coconut cream from curdling or scorching. Just chillax and let the pork binagoongan simmer.