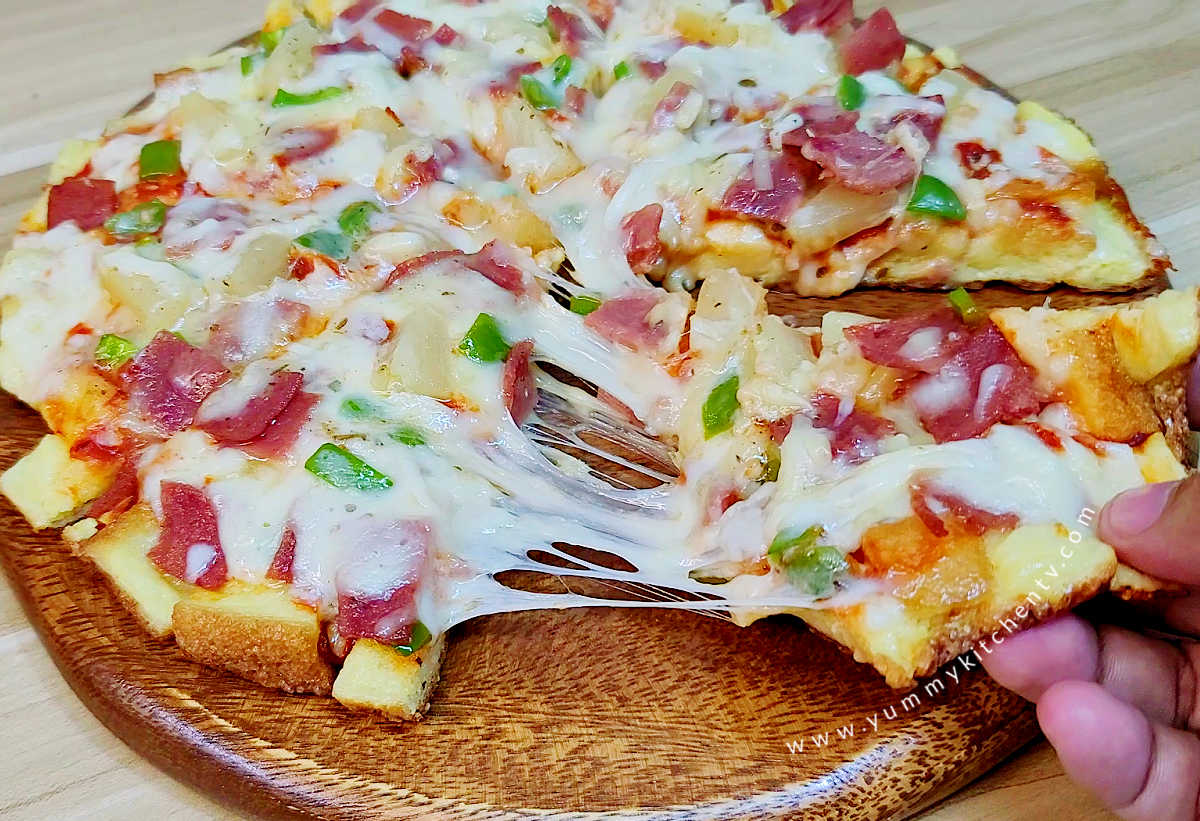 Pan bread pizza is great alternative to expensive pizzas, and this stove top pan bread pizza is made with bread loaf, eggs, pizza sauce, cooked ham, bell peppers, pizza seasoning, oil, mozzarella cheese, pineapple tidbits. So stop buying expensive pizza and just make them on your own! With this bread pan pizza, you wont even be needing an oven. With a pan, a stove, and a great love for pizza, this bread pan pizza recipe will surely satisfy your pizza cravings. This is a great afternoon snack together with some cold iced tea.

A SLICE OF THE HISTORY OF PIZZA

Ever wonder how the very first pizza was made? The city of Naples in Italy is where pizza was born. The word pizza literally means “pie” in Italian. So when we say pizza pie, we literally say pie pie. #LearnNewEveryday

The first pizza were made out of simple flatbreads added with some toppings. Unlike our favorite toppings, the toppings used in the past were garlic, anchovies, oil and tomatoes. The pizza toppings of today were becoming more and more fancy, using prosciutto, sausages, mushrooms and even gold leaf!

Pizzas are often seen as “junk foods” or foods with less nutritional value just because they are served by fastfood restaurants. But if you look at the bigger picture, pizza is a great way of having a lot of nutrients in one bite! It has bread, protein from hams, sausages and cheese, and vitamins and minerals from the veggies used. Some people I know only eats mushrooms and onions when used in a pizza.

So here’s a a secret. If you want someone to learn how to eat a specific food, add them in a pizza in small amounts. They won’t notice them and will get used to it right away!

When your super cute niece asks you for a pizza in the middle of the night, who am I to say “no”, right?

Every Friday is our veggie day at home– a day full of only veggie meals and snacks. It was exactly midnight when I heard a small knock at my door. It was my niece and she’s asking me for a pizza with A LOT OF HAM. It was then that I realized that she waited for midnight to end so Friday veggie day passed and she can eat something non-veggie.

Ever since we make pizza at home, we are using the loaf bread pizza style–a slice of loaf bread topped with the usual pizza toppings and then pan-baked. I asked my niece if that’s what she wants. But she asked me if I can make it “round”. And that’s how I came up with this bread pan pizza recipe. Instead of the slice of load bread being “the pizza slice”, I was able to make the traditional pizza cutting in front of my niece.

What I really love about this dish is that it really resembles the traditional pizza with a round shape. Pizza crust is the most intriguing part in making homemade pizza, but with this simple hack, making a pizza crust is simple and very easy to make.

HOW TO MAKE BREAD PAN PIZZA

Making bread pan pizza is 200 times easier than making a normal pizza. With your pizza crust almost ready, most of your time will be allotted on thinking, “What toppings do I want in my pizza?”

To start, we need to prepare the crust. You only need 3 slices of loaf bread to make a 9-inch pizza! Can you believe that? Cut your bread into small cubes, similar to a size of a crouton (around 1-inch size). Combine it with some beaten eggs and then arrange in a pan. I used a round flat pan to resemble the traditional pizza. Just use any flat pan available (A square pizza looks good too!).

Add any toppings you like. Sorry Hawaiian-style pizza haters, but I really like pineapples on my pizza. The basic pizza toppings include:

Cover the pan and the last thing to do is to wait for the pizza to cook on its own. Remember to use the lowest heat possible to prevent the pizza crust from burning. When the cheese melts, voila! Your bread pan pizza is done! Transfer it to to plate and then cut into slices (Or munch the whole thing on your own!).

If you want it a bit spicy, add a few drops of hot sauce!