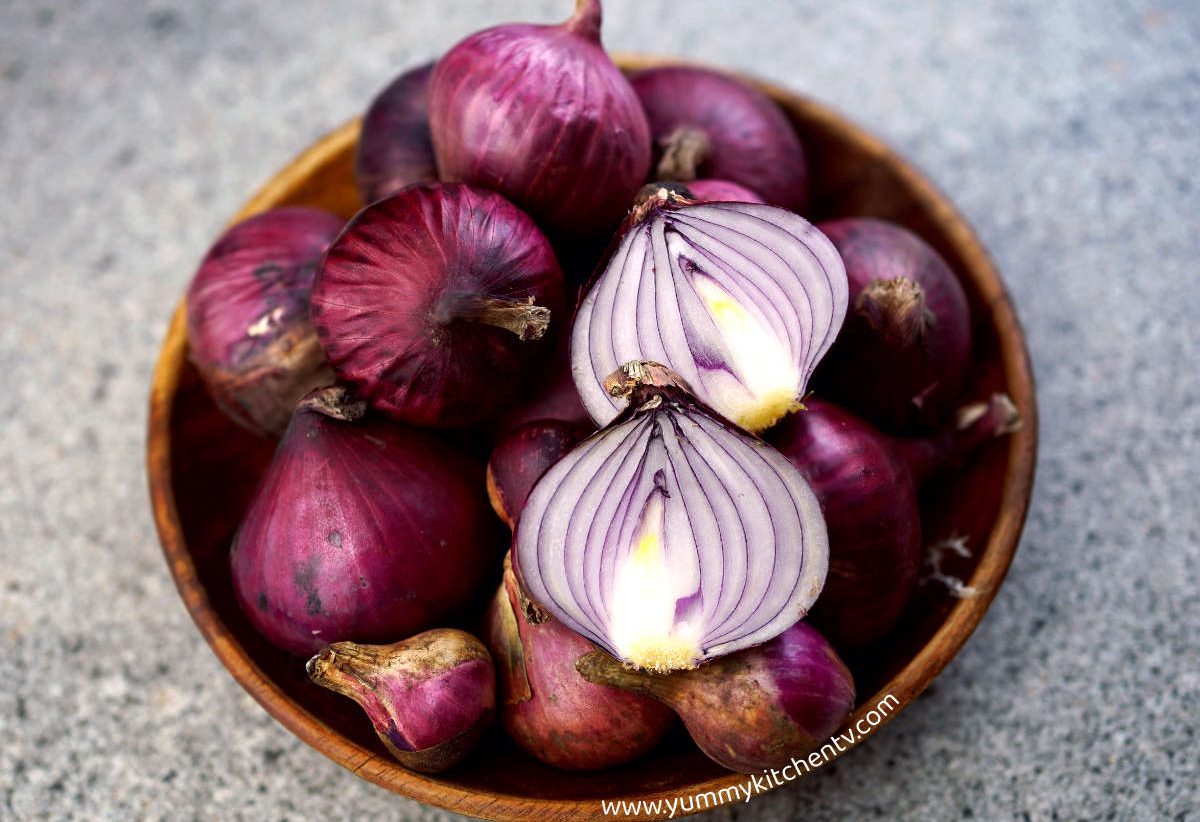 Onions, the common onion, or bulb onion is a wildly cultivated vegetable from the genus Allium (including garlic, chives, and leeks). This herbaceous biennial plant is grown for its edible bulb made of several translucent layers, with a strong pungent smell and flavor is grown worldwide and often eaten as food or made into medicine. An ingredient that just makes any dish pop with a natural subtly sweet taste and beautiful aroma in this article, we’ll know why are they so in demand? What are the types of onions to pair with your dish or cooking method to help elevate your dish and make them so much better.

A Brief History of Onions, a Symbol of Eternal life?

Onions pronounced ‘uhn-yn’, are popularly known as the sad vegetable, making anyone who even tries to make a few slices shed a tear or two. But did you know this Allium Family member is a close relative to garlic, leeks, chives and scallions? This popular vegetable has been cultivated for at least 7,000 years, being one of the oldest cultivated plants of the world. Written records believe that this originated from Western Pakistan, Central Asia and Iran. traces of these origins came from the Bronze Age settlements in China that state that it had been consumed as far back as 5000 BC. Onions were seen upon the Ancient Egyptians as a sign of Eternal Life, viewing the spherical shape and circular rings to be offered to the gods and used as currency to be able to get into heaven. These were also buried with the dead, this proof being onions placed in the eye sockets of Ramesses IV.

Similar to the Garlic, in the past, Onions were revered for its medicinal ability to improve ailments from sores to toothaches and even dysentery. They were consumed by the Ancient Greek athletes, believing that this would help balance their blood and improve athletic skills. Romans also rubbed these onto their gladiators to tone their muscles.and in the middle ages, onions were so valuable that they were even used to pay rent.

5000 years later, the onions are a popular vegetable with a legacy to uphold. The World onion production has even estimated an amount of 105 billion pounds harvested each year. Love it or hate it, this delicately delicious veggie has stood the test of time and will stay for a long long time. Be it to add flavor, texture or color into the dish. You’re sure to find it as a staple in your grocery list.

There are a myriad of different types of onions used as a flavor, texture, and as the main dish. But by just knowing these 3 basic types will make a difference.

Are sweeter but milder than yellow onions. They’re best for recipes that need raw onions like salsa, salads or sandwiches.

An all around versatile onion for flavoring dishes, the most popularly sold onion great for caramelizing, or adding a bit of sweetness in soups and broth. They are great for building flavor.

Gives color and liveliness into the dish with its spicy yet mild flavor. Can be eaten raw as it’s commonly added for decoration or additional filler for its natural bright purple hue. But it is also a good choice for cooking and adding a slight sharp taste, even when the color fades when cooked.

Why do Onions make you cry? How to avoid it

When onions are cut, certain gas and compounds are released causing the nerves around the eyes to get irritated.

With a variety of dishes made with a handful of onions, consumed almost daily, what do onions do to the body?

While there are a list of health benefits to be achieved by consuming onions. There are also non-culinary uses.

Onions like many other countries have become a staple ingredient that just unpack a lot of flavor into the dish. It’s such an important ingredient in FIlipino cuisine that it even has its own “alamat” or legend. As the story goes, it taste with Buyas from ‘sibuyas’ the Filipino term for onion. Buyas was a sensitive girl who grew up in the shadow of her beautiful younger sister. The father often took people to their home to show off the younger daughter’s beauty. This hurt Buyas and she would often hide in the back of the house and cry her heart out. As she grew older, Buyas fell in love with a man who in turn fell in love with her sister, and asked for the sister’s hand in marriage. The next day, Buyas was nowhere to be seen, but an unknown plant was growing at the back of the house. The mother who tried slicing the onion found that she was reduced into tears, reminding her of her other child she named it ‘si-buyas’.

Onions are a sweet yet savory delicacy that adds not just flavor but sometimes a pop of color. An indispensable ingredient in cooking, while one can live without it, it does help add to the flavor if you do add it in your dishes. A workhorse, used in a variety of dishes, even using it as a main dish like onion soup, snacks like onion fritters, grilled to turn into a side dish, pickled for its health benefits or eaten raw to add a bit of crunch and sweetness.