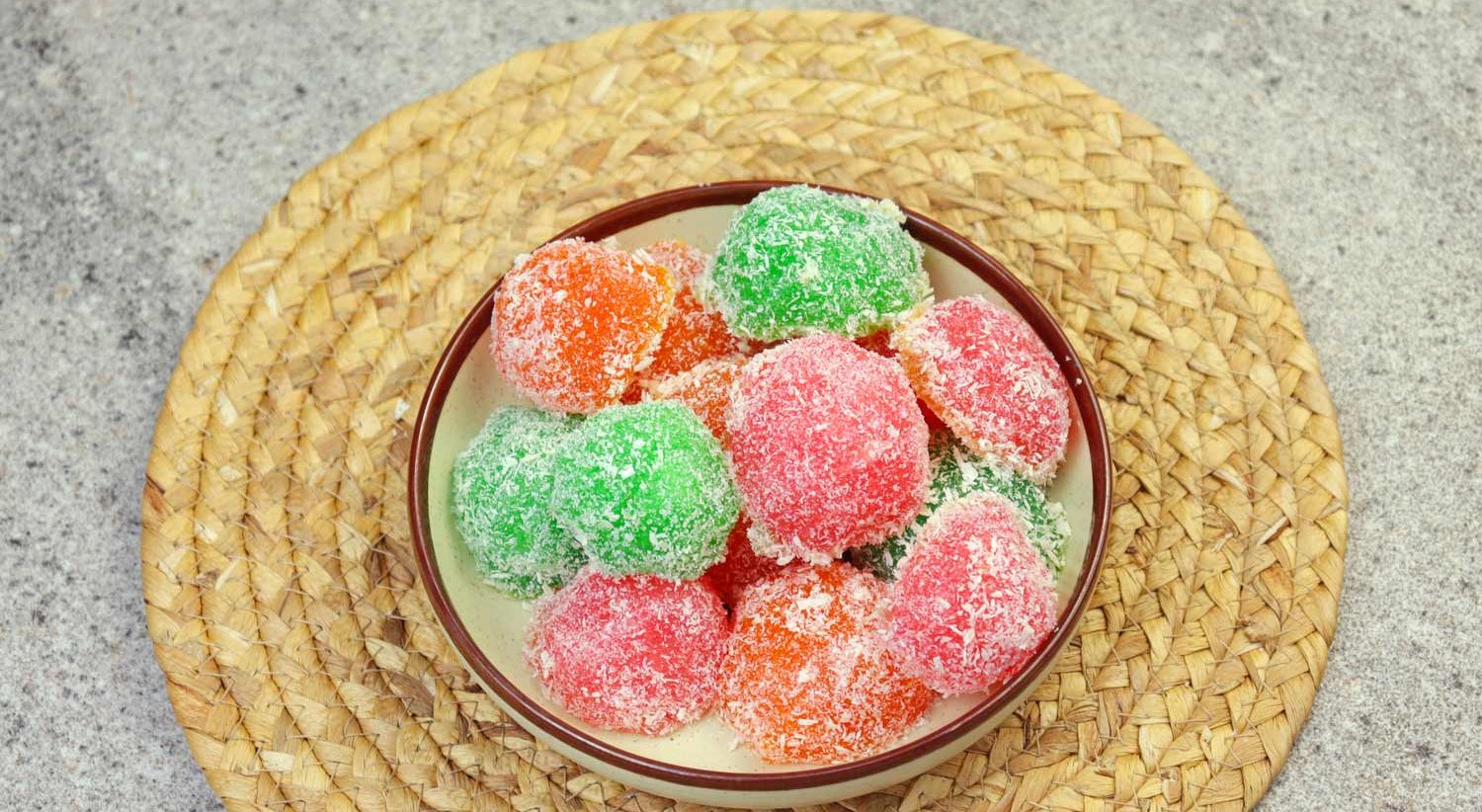 Cassava Balls are Filipino sweet balls, made with grated cassava, tapioca starch sugar, food colours and is coated with a desiccated coconut and sugar. This 4 ingredient recipe might just be what you’re looking for! Cassava isn’t just a root crop to use as a filler in soups or in other savoury dishes, these an also be added in as a dessert ingredient. As simple as it looks there are a lot of ways to enjoy this humble root crop on of which is this chewy and addictive Cassava Balls recipe.

The importance of Cassava

Cassava or ‘Kamoteng kahoy’ in tagalog, even called ‘yuca’ in some parts of South America and in the United States, is a root crop commonly found in the Philippines. Cassava as a perennial plant is cultivated in tropical and subtropical regions used as a major source of carbohydrates. The overall cassava production is made for 35% of the food industry for people, and 31 for industry and 33 for animal feed. In the Philippines, the demand for cassava has estimated over 3 million for the year 2000. Though the biggest producer of cassava is in Nigeria, while the biggest exporter of cassava starch is Thailand. Utilized in many ways, from using fresh roots to turn into traditional dishes, for snacks like dried cassava chips and pieces, to use as a glucose or starch, or boiled or steamed, mashed and made into maize extender or a substitute for rice. Tasted and detailed as wither bitter or sweet, the variety of cassava varies from where it was grown to the soil and depending on how it’s been prepared. Farmers often prefer the bitter version of cassava to deter animals, thieves or pests. In other countries cassava is used to make alcoholic beverages in Brazil, South America, Ecuador or Peru and in many more countries. In the culinary world these are widely consumed as a national, ethnic, or regional importance.

Cassava, as one of the most drought tolerant crop and gives reasonable yields compared to other crops that don’t grow well. The importance of root crops like cassava, sweet potatoes and yams are important to many tropical countries. While many depend on the cassava as their primary food source while not being depending on this. It does help with the feeding of many especially in Africa. Many cassava processing factories can also be found in India eaten as a staple food in Andhra Pradesh. Cassava being the 5thlargest crop in production in Southern China.

These Cassava balls aren’t only nutrient rich they’re also easy to make. This with the help on only 2 or 3 grated cassavas that has been squeezed out of most of the liquids, some sugar for sweetness and tapioca starch to help with making it chewy and thicken the cassava batter. Mixed all these up and toss a scoop of this around the cassava batter to form into a ball or any shape you prefer. Place them on a tray or a plate that can be used to steam later on. Prepare the steamer or a pan with boiling water before hand to quicken up the cooking time. Place the tray with the cassava in and cover for a few minutes till the cassava balls have looked a little bit translucent and looking almost jelly like. Take these out to cool or toss it around in a sugar and desiccated coconut mix to coat before serving it warm or at room temperature.

Have a blast with these colorful sweet treats without the guilty pressure.

These Cassava Balls are a easy peasy, healthy snack to munch on in the afternoons, or for that little sweet craving we sometimes have. With just a few ingredients and under a few minutes, these tasty treats are ready to be consumed all for yourself or to be shared with family and friends. Nibble some of this deliciously tasty and sweet with a bit of coconut take snack, you’re sure to have a smile on your face once you take a bite!